A Fast Walker Gets Stuck in the Slow Lane 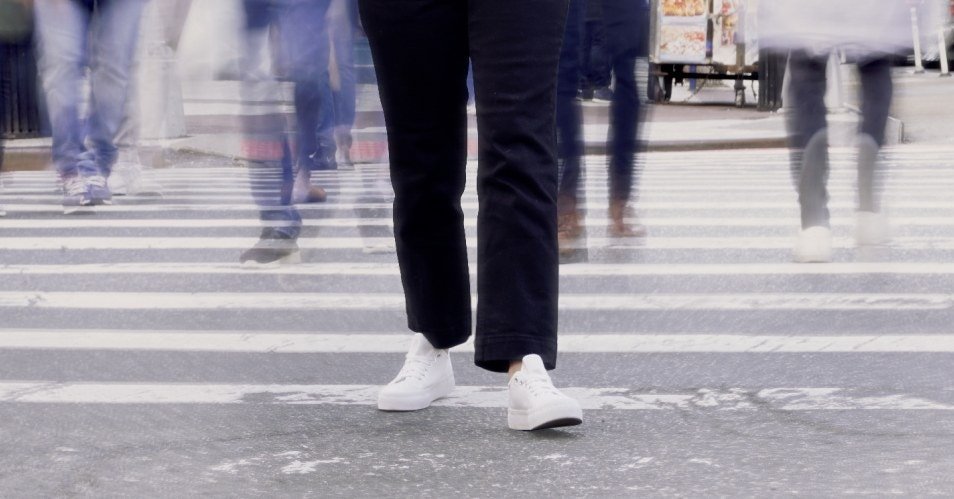 I’m not sure when I became a fast walker. Perhaps I picked up the habit around the time I started at NYU. Becoming a “Real New Yorker” had been my goal since my early teens, when I first began plotting my escape from my rural hometown in northern New Jersey. Life was too slow back home, and walking like a native New Yorker—briskly, with confidence—was something I was going to have to do if I was going to fit in. Perhaps I was like those people who hide their accents when they move to the city. I didn’t want my stride to reveal my small-town roots.

Occasionally, when I needed to squeeze by someone who slowed me down, I took on that other New Yorker trait, the one where I say, “Excuse me,” but it comes out closer to Dustin Hoffman’s famous line in Midnight Cowboy: “I’m walkin’ here!”

I was part of the fast and furious. I’d dip into the street to avoid a planted tree, then step back up onto the sidewalk to take the lead ahead of the texting-while-walking human Roombas and those just plodding along. It wasn’t just about getting around. It was a race. If Google Maps, under the watchful eye of its GPS satellite up above the stratosphere, estimated that my pulsating blue circle would reach my destination in 11 minutes, I’d text my friend to say, “See you in seven!”

It became part of my bedtime ritual to peek at my iPhone’s Health app to see how much ground I’d covered that day. I’d gaze at the app’s orange bar graph—like Narcissus staring at his reflection—that displayed the total mileage for my day, week, month, and year. I was averaging 4 miles a day. On busier days that included a run and a trip to one of my kids’ schools, I’d find the lines on the graph nudging beyond 8 miles. And while I hadn’t yet traded in my analog Swatch for an Apple Watch, my morning runs were accompanied by the halting robotic voice in the Map My Run app, which I kept on my phone to measure my speed and distance. Occasionally I forgot that the app was in workout mode, and the voice would startle me, jolting me out of whatever runner’s daydream I was having.

And then it all came crashing to a halt. I was in my bedroom putting on my workout gear and sneakers, dressing for a run that never happened. I’ve birthed three humans, all with varying degrees of pain management with epidurals, so when I suddenly felt stabbing pains in my abdomen, I knew I was in trouble. On a scale of 1 through 10—with 10 being the most severe pain I’ve ever felt—I was at 12. I hobbled into the emergency room a few blocks from my Brooklyn home (lucky geography there). An ambulance took me to a Manhattan hospital where I would be fed a narrative I wanted to believe: food poisoning.

They jacked me up with morphine and sent me home. I had tickets to see the National that night, and for a few hours, missing that concert seemed like the worst part of my day. But overnight, I grew delirious with pain. By 3 the following afternoon, I crawled—no hyperbole here, crawled—into the Lyft that took me back to the ER. By then, I had an out-of-control infection in my abdomen. I was dying. The doctors rushed me into emergency surgery. The following weeks were a nightmare of multiple hospital stays and complications, but I knew I was one of the lucky ones. Humbled by every aspect of my near-death experience, I was grateful that I kept all my organs, that I never went into shock, and that I was going to make a full recovery.

“My hard-earned, brisk New York stride was downgraded to a carefully choreographed shuffle. Slow was the word of the day, every day.”

Time expanded. I had walked into the hospital on the last summerlike day in late September; when I emerged from the ordeal, I found myself taking my first real steps outside amongst the gold and red leaves of a late fall afternoon. Though I could walk, I was healing from surgery and was not allowed to bend over to pet my cat or pick up a dropped iPhone. The physical therapist at the hospital suggested I order a heavy-duty long-handled grabber from Amazon. Soon the website’s targeted advertising algorithm tried to sell me a cane and walker too. I was in my 40s, but I moved with all the agility of someone twice my age. I had also lost 30 pounds I didn’t need to lose, and I felt weak because of it. In those first weeks, I wasn’t walking enough to nudge the bar graph in the Health app up anywhere close to a mile. My hard-earned, brisk New York stride was downgraded to a carefully choreographed shuffle. Slow was the word of the day, every day.