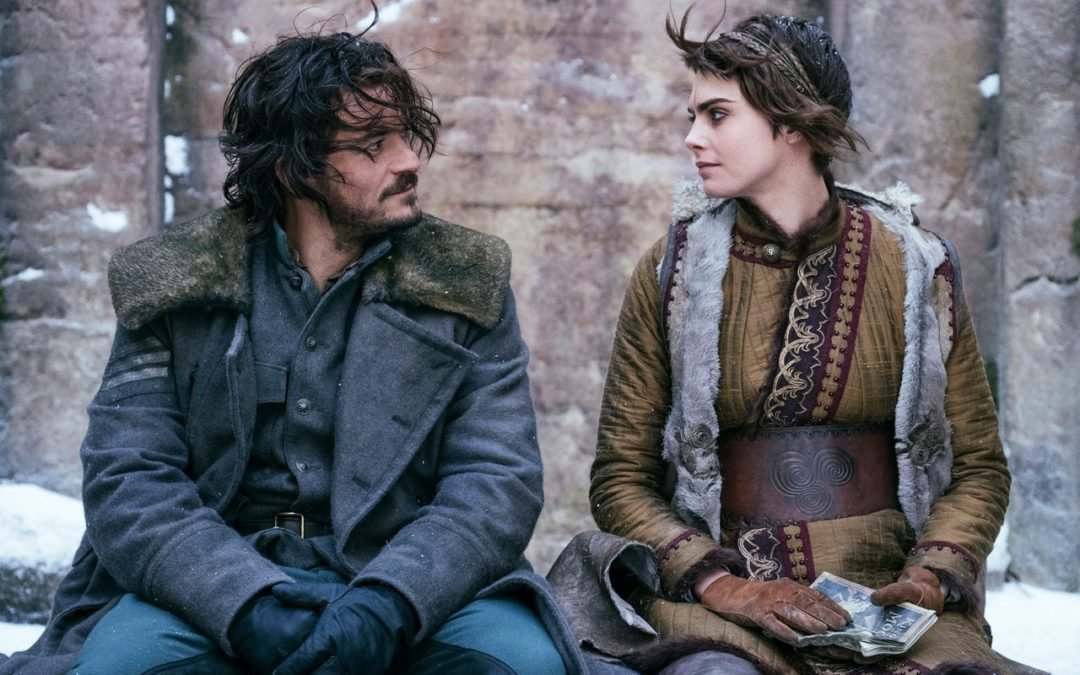 Oscar-winning director Guillermo del Toro was originally tapped to direct the series—the neo-Victorian setting and fantastical creatures would have been very well-suited to his idiosyncratic style. But del Toro left the project before production officially began to focus on his feature-film commitments. He was replaced by Paul McGuigan, who was in turn replaced by Amiel. There was also some apprehension about the series when rumors surfaced that there had been numerous reshoots—often a sign of trouble for a project, although Bloom called the reshoots “a gift” during a San Diego Comic-Con panel.

Beacham concurs, arguing that the reshoots were necessary to pull off a project as ambitious as Carnival Row, particularly when it comes to establishing the world and the major characters and conflicts. “It really helps to have everything done, beginning, middle, and end, and then look back on it as a whole, rather than triage individual episodes,” said Beacham. “We didn’t re-shoot everything from front to back, we mostly focused on the first two episodes. The reshoots vastly improved the first season.”

I’m inclined to agree, too: There’s a polish to the finished eight-episode season that assures you the show knows exactly where it’s headed as the story unfolds, despite how complicated it is. In addition to the compelling central mystery of the murders, there are subplots involving political rivalries, religious and racial tension—particularly from those humans who worship The Martyr, a vaguely Christ-like figure, only hanged instead of crucified—romantic entanglements, a criminal underground, and dozens of smaller narrative flourishes that serve to further build out this fictional world. It is to Beacham’s and Amiel’s credit that the viewing experience is richly immersive rather than hopelessly confusing, and all those threads neatly converge in the finale. That polish extends to the expert pacing: The series takes its time to build toward the Big Reveal, but it is never overly plodding or ponderous.

“We’re definitely going to start seeing this wider world [in S2], to bring more of a global perspective.”

Beacham deliberately populated the Burgue with different races of humans, the better to articulate a particularly ugly aspect of human nature: we always want to identify some other group as an outcast Other, even if we ourselves were once a member of a group facing discrimination. In the real world, Irish, Italian, Jewish, Japanese, Hispanic, and Middle Eastern immigrants, among others, have all taken a turn as despised targets of prejudice and anti-immigration sentiment. The humans of Carnival Row are no different, uniting in resentment against the influx of beings they deem less than human, and hence undeserving of fair and equal treatment.

“The arrival of new people to hate always makes the old [hated] people a little bit more likable,” said Beacham. The fae work in lowly occupations, often as indentured servants to work off the cost of their passage to safety. As a ladies’ maid, Vignette must bind her wings and is forbidden to fly, or be out at night. Of course, that doesn’t stop the humans from frequenting faerie brothels, drawn by the exotic novelty of sex with a winged creature.

Given that season one ends with Philo solving his case, what can we expect from season two? According to Beacham, at least some of the characters will be venturing beyond the Burgue to broaden the scope of the series. Apart from the opening scenes and the standalone flashback episode set in Tirnanoc, we haven’t seen much else of this world—and we know almost nothing about The Pact. “We’re definitely going to start seeing this wider world, locations that have only been mentioned, to bring more of a global perspective,” said Beacham, although the titular Carnival Row neighborhood will still be prominently featured.