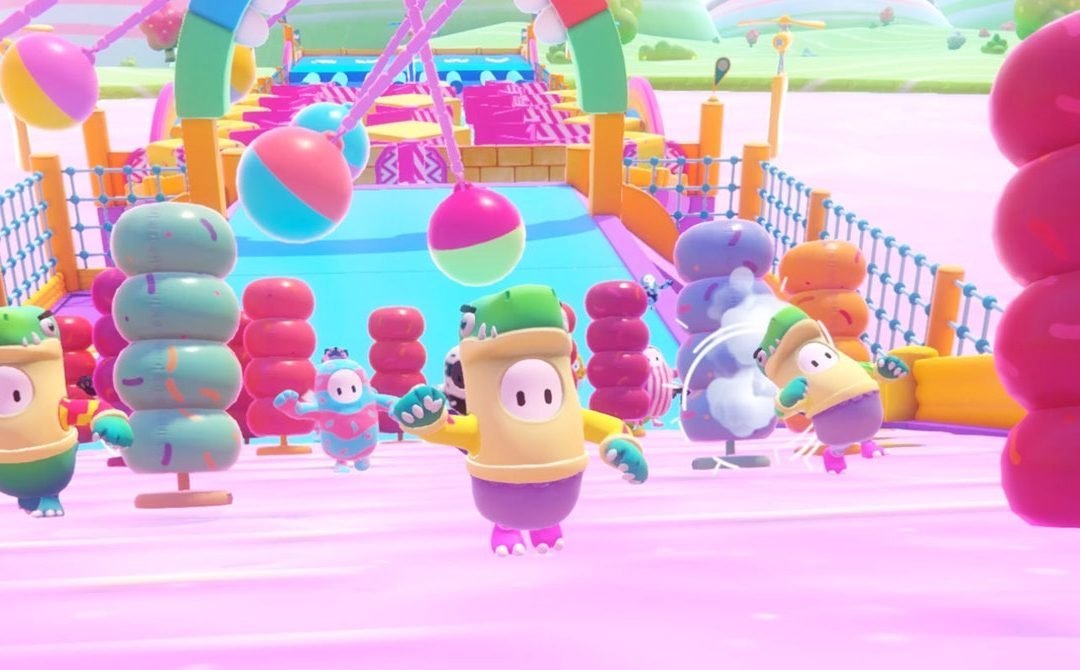 Like elementary-school field day or neighborhood capture-the-flag, the new multiplayer knock-out game Fall Guys: Ultimate Knockout is a lip-biting mixture of fun and mayhem. Everybody gets a participation trophy, but the real winners, sucking on popsicles, feel like low-stakes gods.

Out today on Steam and PlayStation 4, Fall Guys eliminates players out of a pool of 60 through a series of minigames. Players’ avatars, kawaii little beans, race to the end of Ninja Warrior-esque obstacle courses, compete to put eggs in their team’s basket, balance themselves on terrifying seesaws, or outrun slime as part of over 20 free-for-all contests. Losers don’t advance. A silly, boo-ya soundtrack thumps in the background. Round after round, players earn a currency called Fame, with which they purchase cosmetics like pineapple suits or a swirled toothpaste pattern. Winning earns them Crowns, which are exchangeable for more desirable outfits.

Viewed in a certain way, Fall Guys is a real-ass competitive game. It’s easy to forget to breathe in any given minigame. Time a jump poorly and a beam to the stomach sends you flying off the map. Sliding down an inclined seesaw might make you hiss through your teeth as you watch others pass through the finish line. Spatial awareness, reflexes, tactics—all of these come into play if you like. With its sugary aesthetic, losing makes you feel like a weenie. Surviving three or four rounds, though, makes you feel like a total athlete, even as a pirate-costumed bean. If you’re less of a tryhard, just play it with the ethos of 10-year-olds playing eight-player Super Smash Bros. with all the items on.

After four years of incessant battle royale shooter releases—from PlayerUnknown’s Battlegrounds and Fortnite to Ubisoft’s recent Hyper Scape—fatigue is setting in among gamers who love the survival mechanic. In a crowded and self-serious genre that regularly involves items like “Extended Quick-Draw Mag” and “field upgrades,” an utterly tangential, silly sort of survival-slash-battle-royale game is welcome—especially if winning requires demonstrable skill. And instead of awesome stats, victors show off their wins with perfect, dumb-ass bean costumes.

Fall Guys has absolutely exploded on Twitch, in part, for that reason. Today, it was the most-watched game on the platform, with over 427,000 concurrent viewers at one point. Streamers who cut their teeth on hardcore shooters, like Saqib “Lirik” Zahid, are buying in, reacting wildly as they fall into seas of slime. On the side of Felix “xQc” Lengyel’s stream, he listed his win count (18) and his streak (1) this afternoon. (Another reason for its popularity was the developer’s strategy of giving out game keys for the limited-time beta, Kotaku reports.)

“We will be tested in integrity, speed, flexibility! We will test their mental thoughts,” said Zahid, streaming the game today in an announcer’s voice. “Here we go as the sandwich makes its way battling the scuffed astronaut into the double-rectangle, going into the donuts of pain.”

Arguably the most rewarded quality in survival games is grit. Try and try again, and keep a level head through a barrage of environmental obstacles and opponents’ chaos-making. Often more easily attainable than skill, grit is rewarded in equal measure throughout Fall Guys’ stupid-fun challenges, which become easier after multiple failures, but more difficult as other players level up in step. Pushed backwards by a balloony whatsit or a swirly mallet, you just have to keep going. It’s a more egalitarian goal than “headshot enemies,” and less serious, too. Although Fall Guys launched today with severe server issues, leading developers to disable account creation on PlayStation 4 and matchmaking on PC, its wide-armed embrace of the best and most frustrating battle royale features might keep it relevant.