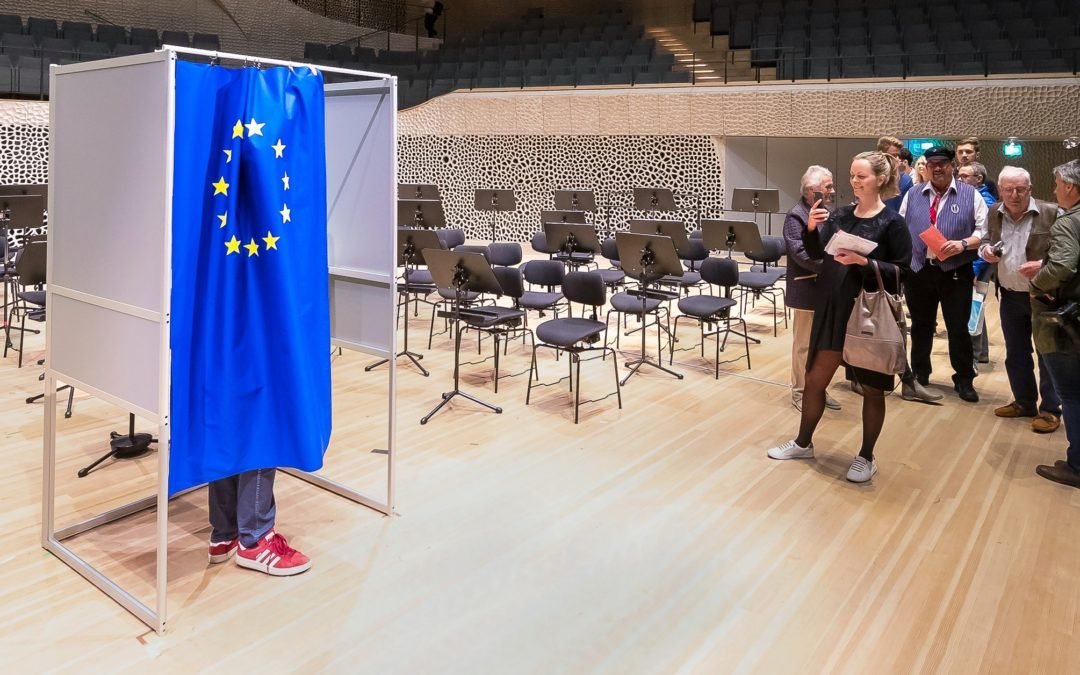 In Italy, the perpetrators spread a movie clip of a car being destroyed and pretended it was news footage of migrants wrecking a police vehicle. In Poland, they disseminated a fake news story about migrant taxi drivers raping European women. In Spain, they shared lies about Catalan separatists shutting down a child cancer center. In the UK, they shared a blog post with a beheading photo and a sensationalist headline, claiming “A Billion Muslims Want Sharia Law.”

These are just a few examples of the ugly far-right propaganda and disinformation that has flooded Facebook ahead of parliamentary elections in the European Union this week. According to a new report by online activist group Avaaz, networks of fake accounts, pages, and groups have been spreading divisive, white-nationalist, anti-immigrant content throughout Germany, the UK, France, Italy, Poland, and Spain. In some cases, they posed as politicians themselves. In others, they created fan pages for political parties or alternative media organizations. Together, they amassed followings several times larger than the actual far-right groups operating within these countries.

As part of its investigation, Avaaz’s global network of volunteers reported more than 500 “suspicious” pages and groups to Facebook. The company has since taken action against 77 of them, the report states, and has removed more than 200 accounts. Avaaz says those pages had nearly 6 million followers among them, three times as many followers as the actual far-right groups in those countries combined. The content they spread was viewed 533 million times over the past three months, according to the report. Just who exactly is behind these operations remains a mystery.

Facebook confirmed that it had taken some accounts and pages down, but did not provide specific numbers. “We thank Avaaz for sharing their research for us to investigate. As we have said, we are focused on protecting the integrity of elections across the European Union and around the world,” a Facebook spokesperson said. “We have removed a number of fake and duplicate accounts that were violating our authenticity policies, as well as multiple pages for name change and other violations. We also took action against pages that repeatedly posted misinformation. We will take further action if we find additional violations.”

Issie Lapowsky covers the intersection of tech, politics, and national affairs for WIRED.

The report underscores a persistent dilemma for Facebook. The company has gotten better at recognizing and removing election interference operations on its platform after coming under fire for how Russian operatives were able to target American voters during the 2016 presidential campaign. But despite efforts to protect elections in the EU and around the world from further interference, Facebook still hasn’t found a way to keep all this toxic and manipulative content from spreading in the first place. Of course, it’s not alone among social media companies. But Facebook’s unparalleled size makes it a particularly powerful tool.

“With days to go until EU elections, Europe is drowning in disinformation. The size and sophistication of these networks makes them weapons of mass destruction for democracy, and right now they are pointed squarely at Europe,” Christoph Schott, campaign director at Avaaz, said in a statement. “The most worrying thing is we’ve just scratched the surface. There could be much, much more out there.”

Avaaz has been on a mission recently to get tech companies to take a more aggressive stance against disinformation. Earlier this month, the organization led a group of so-called fake news victims to Silicon Valley to meet with Facebook and Twitter. This report is part of that work. Over the course of a three-month investigation, Avaaz researchers and volunteers around the globe reviewed thousands of pieces of suspected disinformation, hate speech, and fake news, much of it submitted by the public through a crowdsourcing site that Avaaz created. They looked for signs that the pages, groups, and accounts connected to this content might be violating Facebook’s policies around authenticity, violence, or hate speech, and shared their findings with Facebook. Facebook took action against some, but not all, of the accounts, pages, and groups Avaaz identified.

“With days to go until EU elections, Europe is drowning in disinformation.”

In Germany, for example, Avaaz says Facebook took action against 131 fake accounts, many of which propped up the far-right party Alternative for Germany, or AfD. In France, Facebook removed a page called Suavelos, which promoted white-nationalist ideas, something Facebook only recently prohibited. Facebook shut down 23 pages Avaaz reported in Italy for a variety of infractions, including changing the name of a page to something unrelated to the page’s origins; one such page changed its name eight times, according to Avaaz, starting as a sports page and eventually morphing into a political page. In Poland, Avaaz found a network of pages sharing a fake news story almost simultaneously about migrant drivers raping European women. Of the 26 pages Avaaz found that shared the article, Facebook took down 11. Avaaz was also behind a recently reported takedown of pages and groups in Spain just before the election there in April. Finally, in the UK, Avaaz says Facebook removed 132 posts, pages, and groups listed in its report.

These takedowns are different from the ones Facebook has traditionally announced publicly, in that none of them appear to be what the company calls “coordinated inauthentic behavior” driven by a nation-state or single organization. Facebook has previously announced these types of influence operations associated with entities in Russia, Iran, and Israel. Instead, the Facebook spokesperson said, these removals are part of actions the company takes “regularly and routinely” against content that violates its policies.

In some ways, the fact that Facebook is routinely taking these actions is a sign of progress. When Russian operatives set out to interfere in the 2016 US election, the company was largely unaware this was even a threat. And yet Avaaz’s organizers say that’s cold comfort to the voters across Europe who have been targeted by these propagandists. They believe Facebook should do more to set the record straight when people have been exposed to this type of content. Right now, Facebook notifies people who have shared posts flagged by a fact-checker. But that skips over all the people who might have simply seen the content in their News Feeds or viewed removed content that fact-checkers never caught.

“Millions of Europeans will cast their votes this week after being exposed to toxic lies without knowing it. Facebook responded quickly to our investigation and shut these networks down, but it’s nowhere near enough,” Schott said in a statement. “Facebook should make sure everyone who saw this disinformation receives an urgent correction, and stop their algorithms promoting this poison.”