Google and the Cost of ‘Data Voids’ During a Pandemic

Across the nation, protesters have taken to the street, demanding that governors “reopen” state economies. From North Carolina to Maryland, Pennsylvania to Illinois, Americans want the opportunity to work, and some feel that state restrictions have encroached on their civil liberties.

While the basic right to work is not something that would usually seem polarizing, many epidemiologists, infectious disease experts, and politicians argue that opening the economy too early is a public-health risk. As rallies spread from state to state, they have come to embody the deep political rifts seemingly entrenched in American society. Amidst the crowds fly “Don’t Tread on Me” flags, and many who refuse to wear masks proudly wear MAGA hats.

The Southern Poverty Law Center has warned that the rallies are providing a platform for extremist groups, while others note the important role that whiteness plays in driving these protests altogether. Given the propensity for these groups to conflate economic concerns with white supremacist slogans, gatherings have looked eerily similar to the crowds that formed in Charlottesville, Virginia, in August 2017.

On May 1, these concerns coalesced around a picture taken by a nurse at the “Re-Open Illinois” protest. While attending the rally, the person posted a picture of a woman holding a sign with the German phrase “Arbeit macht frei.” While it literally translates to “Work sets you free” in English, the phrase also holds symbolic significance. It was a slogan of the Nazi party and appeared on the entrance of Auschwitz and other concentration camps.

Francesca Tripodi is an assistant professor at James Madison University. Her book exploring how ideological biases are coded into key words is currently under contract with Yale University Press.

As of May 4 this post has been retweeted over 16,000 times and liked by more than 52,000 users. It sparked #IllinoisNazi to start trending on Twitter on May 2. In the feed, many began to question if the photo was “real.” Given my previous research on how users seek out truth and validate news, I went into a Google incognito window and typed the phrase “arbeit macht frei protest sign illinois.” In the wake of the new story unfolding, information about the situation was limited. The newsworthiness of the phrase existed in what researchers refer to as a “data void”—search terms for which the available relevant data is limited or problematic. At that moment (May 2, a little before noon ET), only a few stories surfaced. One was from The Guardian condemning the use of the slogan at the rally. Another from Mediaite featured a headline accusing the Associated Press of misidentifying the sign and publishing misinformation. Even more confusing is that a few hits down was the AP link to a fact-check article with the headline “Protestor not waving sign with Nazi slogan.” 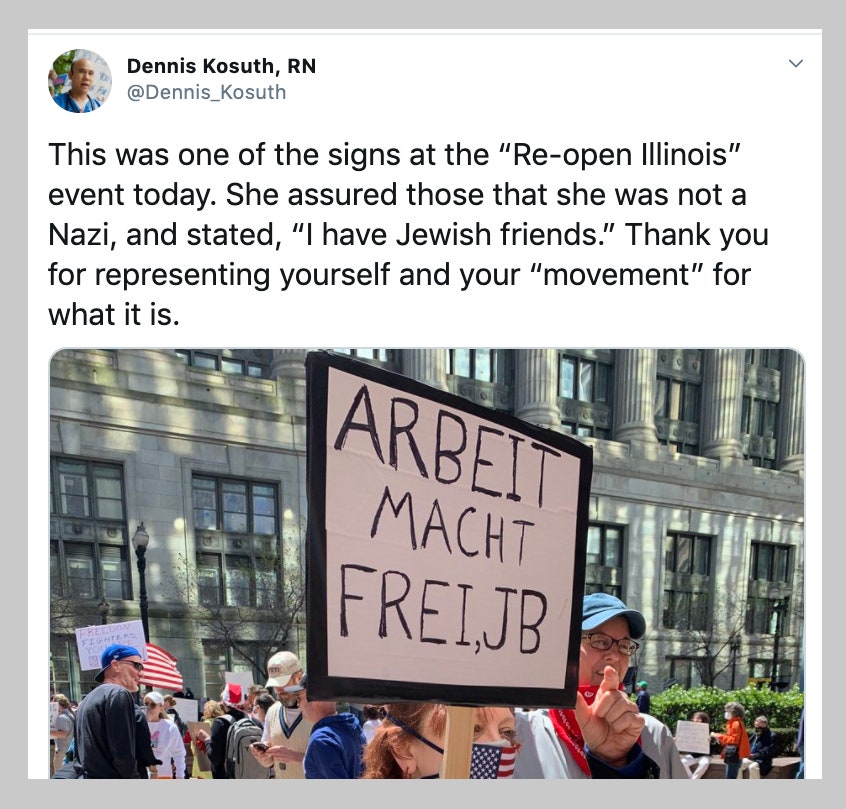 I was immediately confused. Was this post a “fake”? Had it been Photoshopped in an effort to frame libertarians as Nazis? I clicked on the AP link, which seemed to claim that the photo of a sign reading “Arbeit macht frei” was edited. It wasn’t until I read the article in full that I realized the depth of the confusion. The AP was fact-checking an entirely different protest. It wasn’t misidentifying a fake photo as Mediaite claimed, it was fact-checking a claim from Re-Open Pittsburgh not Re-Open Illinois. Adding to the confusion was that the AP story was published on the same day as the Re-Open Illinois protest (May 1). Herein lies the power of data voids and why the temporal structure of news is so critical when understanding the flow of misinformation online.

Linking to the Mediaite article, people began dismissing the Illinois sign as “fake.” While some come back on the thread to correct their mistake, the claim is already out there. Those wanting to think the sign wasn’t real now have the power of a news story to back their claim. As you can see on Twitter, people are also using the AP story to dismiss the sign as fake. Users out their “doing their own research” are clearly not reading past the headline when it comes to verifying their own biases. 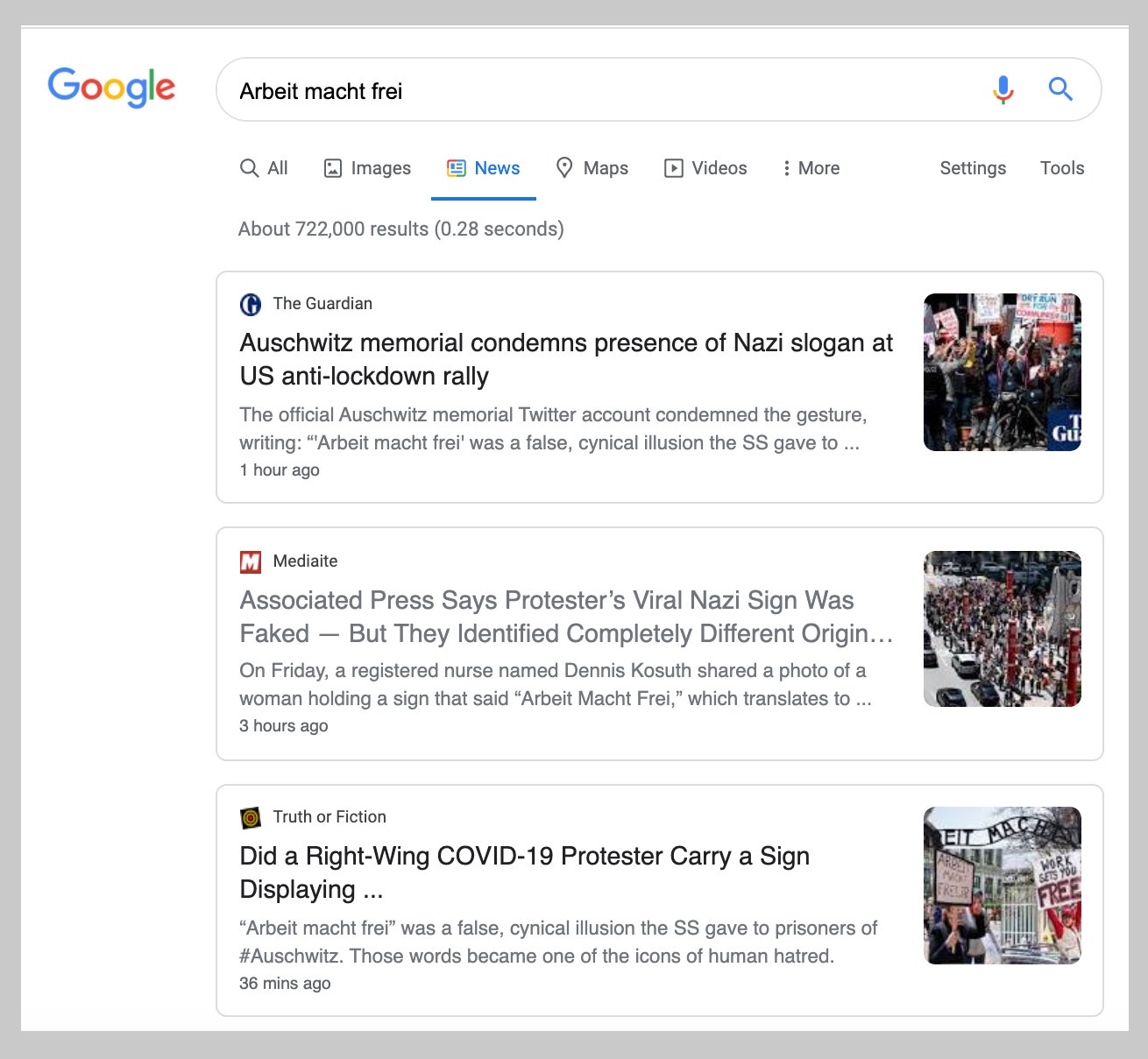 Since the original tweet, the void has been filled. Search for information about the sign and a number of news stories from Buzzfeed, The Hill, Business Insider, NBC, and Forbes corroborate the claims by the nurse in Illinois. He witnessed the rally, took the photo on his phone, and has verified the sign was real. The Auschwitz Museum has also used Twitter to condemn the hateful language used on the Illinois sign. 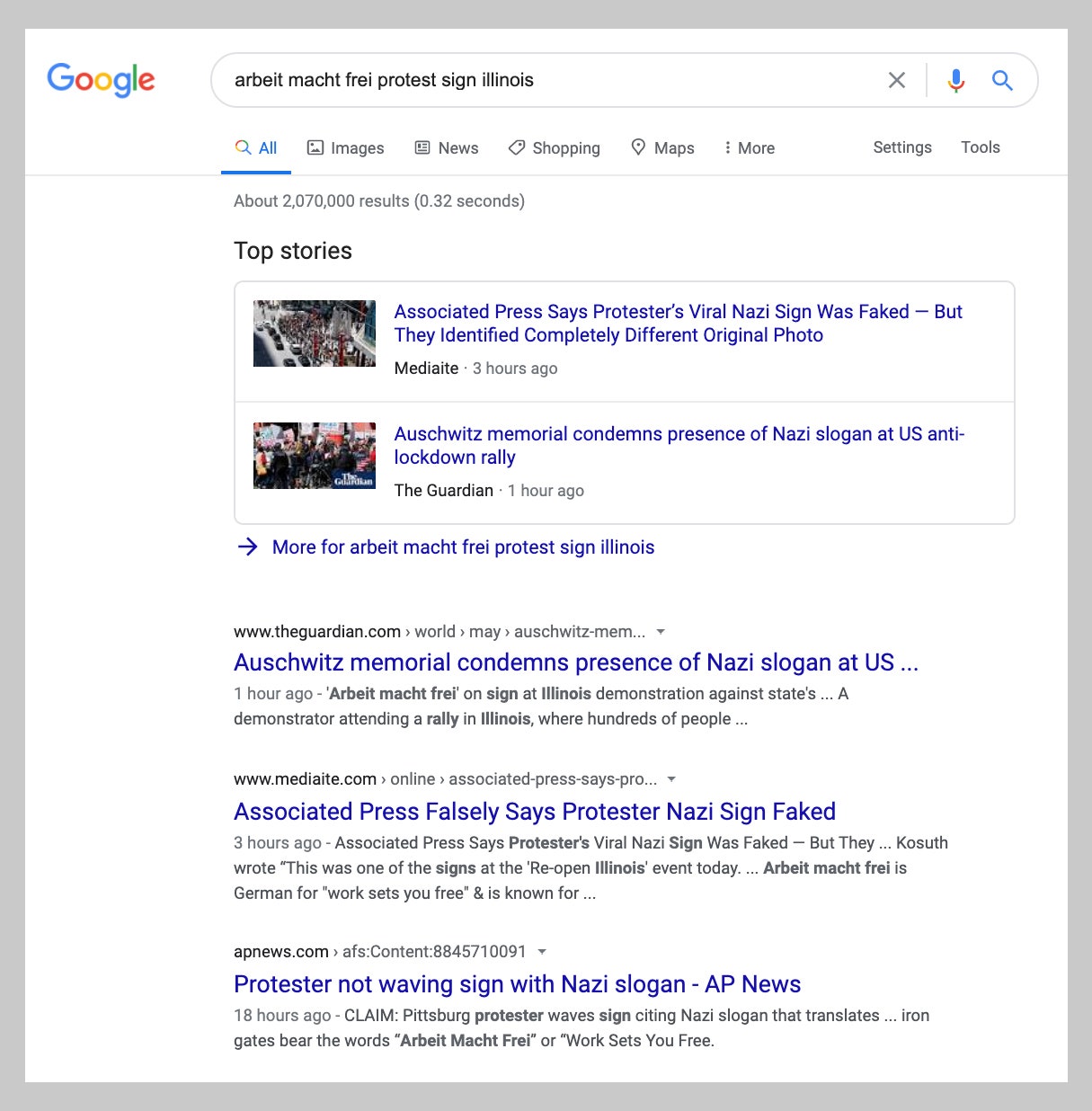 But in many ways, the damage is already done. As #IllionisNazi began to trend, people who believed what they saw and those who didn’t sought to find more information. Based on Google’s immediate returns, it allowed for some to walk away thinking that hate speech and antisemitism in the United States isn’t “real.” It also sowed the seeds of distrust in the AP to serve as a neutral fact checker, largely because many failed to check what the AP was actually fact-checking. This will be the most lasting effect of this event. The immediate misreporting on the event, and the irresponsible headlines that followed, only served to erode trust in yet another institution, putting us even further behind when it comes to combating the uphill battle of misinformation online.