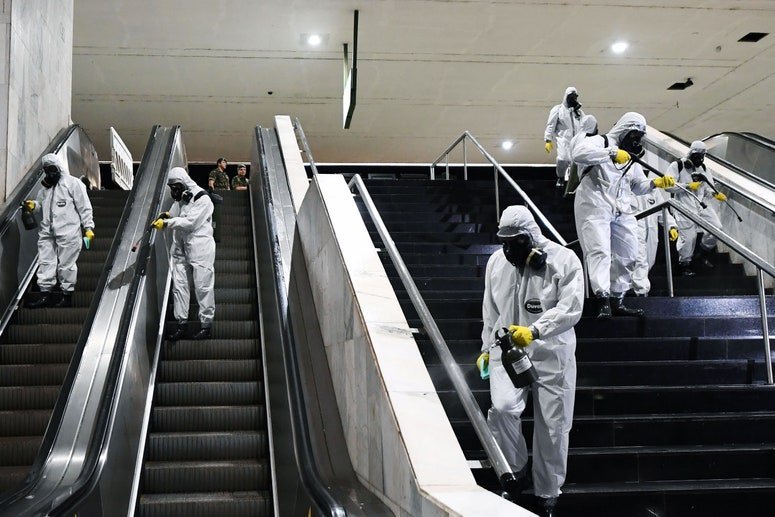 Adapt is pushing for nursing homes to allow residents to leave of their own accord and find safer homes in the community. “If the local nursing facility were on fire, we’d be rushing to get people out. If there were a hurricane coming, people would be told to evacuate and get to safety. But what’s happening right now is […] we’re watching people die in these facilities and we’re not doing anything about it,” Darling says.

The organization has a more ambitious goal, too: Adapt has long called for the elimination of most long-term nursing facilities. They argue that residents of long-term care facilities often end up there not because they want to, but because they have no other viable options. Very often, that puts them at a higher risk of getting sick. Even before the pandemic, between 2013 and 2017, 82 percent of nursing homes in the United States were cited at least once for failures to prevent or control infections, according to the US Government Accountability Office. And it’s not just the “bad apple” nursing homes that have been hit hardest by Covid-19. Data suggests that nursing homes with low ratings, as determined by the Centers for Medicare & Medicaid Services, are faring just as well (or badly) as any other.

Instead of housing people in congregate settings, Adapt and other activists argue that better outcomes can be achieved by supporting people in small group homes of two to four people or, even better, by supporting them in place. Mike Ervin, of The Progressive, pointed out to me that most data suggests that home-based care is cheaper than nursing homes in the long run. The Money Follows the Person program, for example, has demonstrated that on average, when someone moves from a nursing facility into the community, their overall Medicare and Medicaid expenditures drop by 20 percent. Even if it weren’t cheaper to deinstitutionalize, Ervin argues that it would still be the right thing to do. “So what if it was more expensive? It doesn’t mean that they deserve to be locked up because something costs more money.” As disability advocate Alice Wong recently wrote, “freedom to live in the community is a human right.”

The concept of placing aging and disabled people in largely private facilities like this hasn’t been around all that long. Through the middle of the 20th century, older folks were more likely to spend their final days at “rest homes” such as the Winchester Home for Aged Women in Charlestown, Massachusetts. These tiny facilities generally housed 30 to 50 people, often from similar economic and social backgrounds, and they were generally run by philanthropists. Nursing homes, as we know them today, didn’t really take off until the 1950s, when the Hill-Burton Act allowed public money to be used to build them. Between 1960 and 1974, the nation’s expenditures on nursing homes grew by 1,400 percent. A 1969 article in Barron’s noted the boom:

Of late … [a] kind of frenzy seems to grip the stock market at the merest mention of those magic words: “convalescent care,” “extended care,” “continued care.” All euphemisms for the services provided by nursing homes, they stand for the hottest investment around today. . . . “Nobody,” a new-issue underwriter said the other day, “can lose money in this business. There’s just no way.”

Today, the domestic nursing home industry is huge. According to the CDC there were 15,600 facilities in 2016, about two-thirds of which were for-profit. According to one market research firm, the global long-term care business will be worth $1.7 trillion in 2027. In the US, nursing home lobbyists have already gotten to work seeking immunity from Covid-19–related lawsuits, asking for billions in federal relief funding, and resisting additional oversights and regulations that might be imposed on them.

Everything You Need to Know About the Coronavirus

Here’s all the WIRED coverage in one place, from how to keep your children entertained to how this outbreak is affecting the economy.

As stories flood in about nursing homes across the world fumbling their response to the coronavirus, Adapt and other advocates hope that this could be a moment to consider how the industry could be improved. The organization hopes that Congress will consider adding the Disability Integration Act—which protects the right for both disabled and older Americans to live in the community—to future Covid-19 relief bills.

As we face a long and uncertain road to recovery, it’s unlikely that nursing facilities will be fully safe for residents or staff in the near- or even mid-term future. And as we’ve seen with the current outbreak, all it takes is one infected person to decimate an entire community. “Even when it’s not spreading significantly in the general public, it will still be an issue for us in the nursing facilities,” Darling says.