One Woman Pushes Hula-Hooping to Its Absurd, Glittery Limits 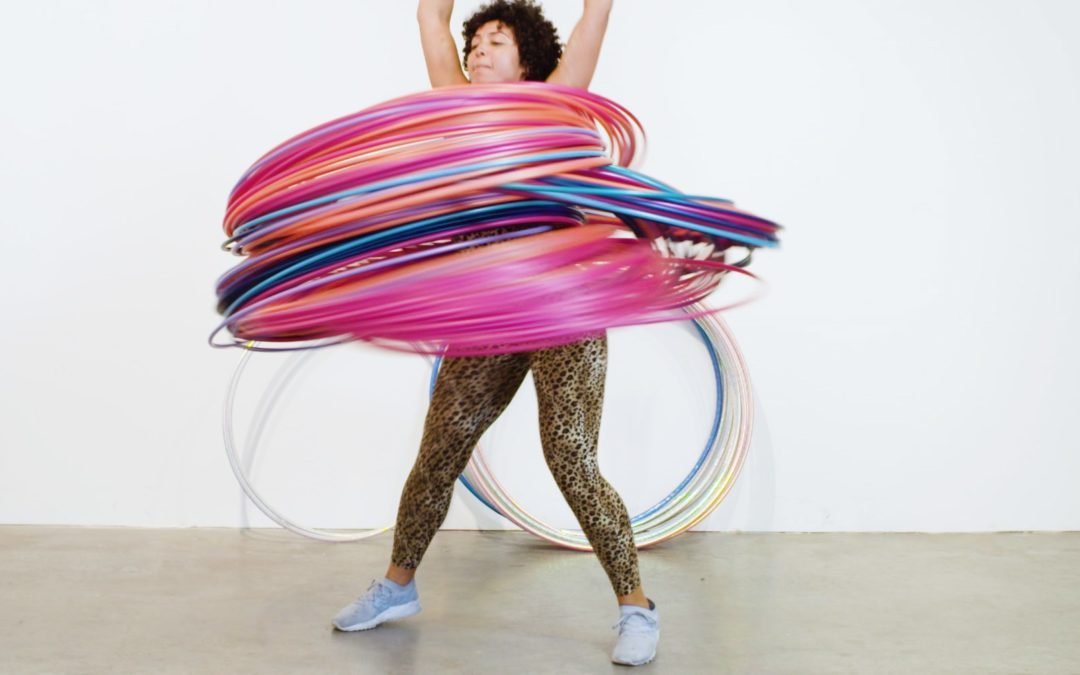 On an uncommonly cold and gray Thursday in Los Angeles, in an empty alleyway outside her studio in Chinatown, Marawa Ibrahim—aka Marawa the Amazing—is preparing to spin what appears to be about 30 sparkly Hula-Hoops.

It looks like a preposterous number of Hula-Hoops, to most people anyway. But for Marawa, a virtuosic performance artist with a bachelor’s degree from Australia’s National Institute of Circus Arts and more than one hoop-related world record to her name, it’s a warm-up.

The rings, each of which has been hand-wrapped in expensive glitter tape, start out stacked in a column. Marawa, who is wearing a leopard-print unitard, stands at their center. She scoops them up, presses them against the small of her back, and tips them over her head before leveling them before her, parallel to the ground. (Tilting the hoops like this is a habit, she says, like a basketball player’s free-throw ritual.) With her feet planted wide, she twists her torso first to the right, then quickly to the left while setting the hoops in counterclockwise motion with her right hand.

The hoops are spinning now. With her arms straight above her head, her frame undulating like a vertical sine wave, they start to distribute themselves along cross sections of her body spanning from her shoulders to her knees. They loop around together at first, then shift slowly out of phase to form a spirographic pattern Marawa calls “skirting,” then merge again, a couple hoops at a time. She beams, raises her eyebrows, turns in place.

The hoops are still spinning.

At one point, a hoop looks like it might escape her control, dip below her knees, and clatter to the ground. But Marawa, whose consciousness I imagine being distributed through her body, like that of an octopus, senses the wayward ring. With a wiggle (a word that utterly fails to capture the degree of somatic genius this act requires), she saves it, sending it spiraling up to meet the others.

Watching Marawa do this with 30 hoops is impressive, but it’s nowhere near her limit. In 2015, she set the current world record by keeping 200 of them aloft simultaneously. “No one ever believes me when I tell them,” she says. (See above, for video evidence.) For the record to count, she had to get the rings going under her own power and keep them rotating for a minimum of three revolutions. Her attempt lasted all of four seconds, and practically knocked her over. (Spinning 40 pounds of plastic on your 5-foot, 4-inch frame will set you off balance in a hurry.) But it counted.

Forget about the world record for a second. Because even more astonishing than her absolute limit is Marawa’s command of intermediate numbers of hoops. When she sets in motion a stack of say, 100 hoops, she can keep them aloft for up to a minute. And it’s in watching her keep that many rings going that you really start to appreciate what sets Marawa apart from the vast majority of people who have ever set hoop to hip.

A quick primer on the physics of this stuff: For a Hula-Hoop to continue spinning, one must apply force to the hoop in both the fore-aft and up-down directions. “The Hula-Hoop stays aloft thanks to conservation of angular momentum, but the system is extremely unstable—one little hiccup, and the hoop comes tumbling down,” says Ramesh Balasubramaniam, a sensorimotor neuroscientist at UC Merced and an expert in how the brain and body work together to perform skilled tasks.

In a 2004 study titled “Coordination Modes in the Multisegmental Dynamics of Hula-Hooping,” Balasubramaniam showed that most Hula-Hoopers apply the necessary forces through the coordination of two lower-limb “systems”: The hips and ankles apply force in the fore-aft direction, while the knees add force in the up-down direction. When things are going smoothly, the hip-ankle system and the knee system oscillate in unison. But if you interrupt your hooper’s flow and cause them to falter—say, by redirecting their attention from hooping to counting backwards from 100 in increments of seven—their knees will fall out of phase with the hips and ankles by pumping a little faster to try to restore order to the system.

This “corrective action,” as Balasubramaniam calls it, is what amateur hoopers like you and me use to keep a single hoop from hitting the floor. What Marawa does to keep her many hoops looping involves the exquisite pairing of two things: While most people rely on their hips, knees, and ankles to keep their Hula-Hoop aloft, Marawa recruits her whole body. “Her brain has divided her body into other decoupled systems,” Balasubramaniam explains. “For most people it’s just the hip-knee and ankle systems. But she’s added other oscillators in the form of her head, neck, shoulders, and chest.”

Second, her body seems to be keeping track of all the hoops. “Every hoop needs to have its angular momentum conserved,” according to Balasubramaniam. “What she’s learned to do is get the collective motion of all the hoops to follow the same conservation principle, and it’s a skill. The timing of all her oscillators must be so precise that she’s able to collectively see where all these hoops are, and she’s able to control them.”

Marawa says 200 hoops is probably her limit. While she might be able to move more than that with her body, she would first need to pick them up and get them started, “and I can’t get my arms around them!” She thinks someone with the right physique—tall, strong core, long arms for optimal hoop-scoopage—could top her record.

But to match Marawa’s skill would likely require untold hours of dedicated practice, amounting to a complete reformulation of one’s life—and the odds of anyone besting her on that front anytime soon seem slim. Her latest stage production, an eight-woman variety act called Quality Novelty, blends hooping, high-heeled roller skating, and acrobatics. When she’s not performing, she leads regular “Hoola Schoola” workshops for kids and adults with the Majorettes, her troupe of record-holding hoopers, and sells skate- and hoop-themed apparel and accessories of her own design through her online Hoopermarket. Last year, she distilled many of her experiences—not just as a performer, but as a woman—into The Girl Guide, a modern handbook for girls going through puberty. She promotes the book wherever she travels (which is all over the world), through pop-up parties replete with hoops, music, dancing, and roller skates.

Marawa, in other words, is more than a steadfast practitioner of hooping. She’s a full-blown hula-vangelist. Back in her studio, while adding hoops to a stack already 150 rings high, she pauses to explain their appeal. “They’re fun, you can take them anywhere, and with a little practice, anyone can do it.”