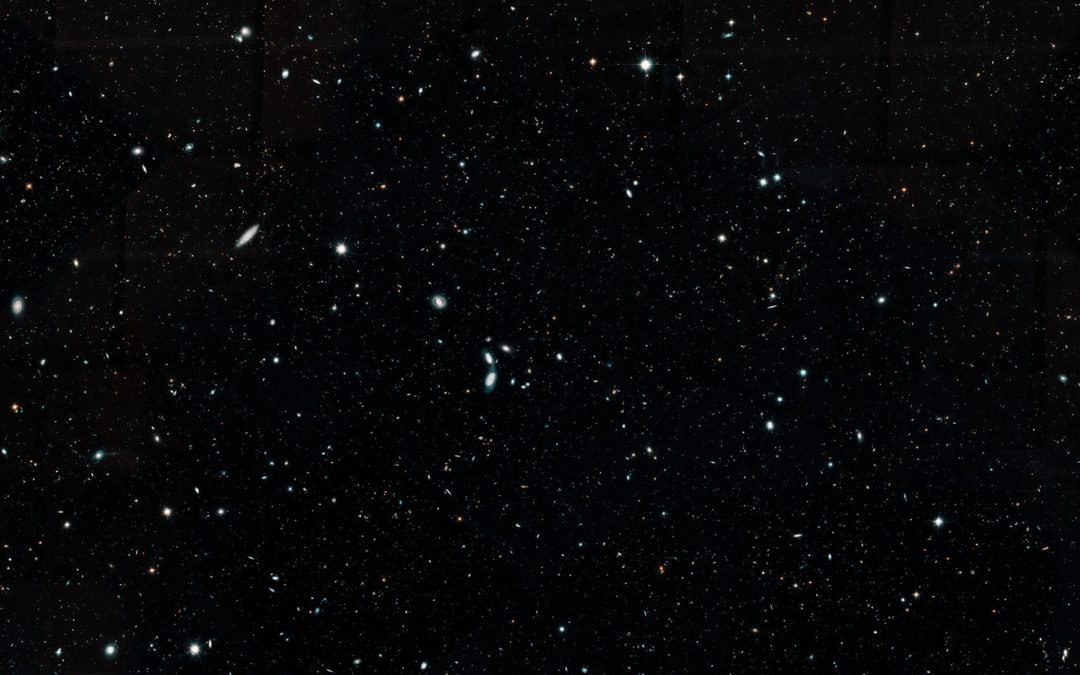 This is no ordinary space photo: It is 16 years’ worth of Hubble data—7,500 exposures in total, including more than 265,000 galaxies. But that’s not all. Some of the galaxies in this image are so ancient, they date back to almost the beginning of the universe. That means that most of the light you see here as tiny specs of starlight, the light from galaxies full of planets and black holes and a myriad of mysteries, has been traveling through the universe for the last 13.3 billion years. Hubble is not just a telescope, it’s a time machine.

You might not know it, but a satellite galaxy orbits our Milky Way, and it’s called the Large Magellanic Cloud. In this photo you can see a section parsed out from the LMC—a star cluster that contains many stars known as Cepheid variables. These stars dim and brighten at regular intervals, and astronomers on Earth can use them as a way to measure the distance between us and the galaxy, helping to better calculate the rate of expansion of the universe.

The European Space Agency’s Gaia space telescope has a big job: mapping the cosmos. It has sent remarkable photos of the space around us back to Earth, but this image is not something Gaia captured. Rather, this is a picture of Gaia itself. Scientists need to be able to tell exactly what part of the sky the craft is mapping and to do so, they must locate Gaia as it orbits the Earth. While we can’t see the tiny space instrument, it is there among the scattered starlight.

These are human cells sprinkled with nanoparticles seen here as bright green. NASA and the European Space Agency are both studying what the effects of space are on the human body, including prematurely aging cells and cardiovascular disease. By injecting these nanoparticles into the cells, scientists can watch how the enzymes within them interact in space, hopefully revealing more about how the microgravity environment impacts the long-term health of astronauts.

This area on Mars is called Sisyphi Cavi and is located near the Martian South Pole. (Cavi is actually a term that describes steep side depressions.) If you look around the tops of the cliff, you’ll spot active gullies that look like long ripples in the sand. These are created by wind and active geological processes. And in the middle of each depression are dunes that form almost hill-like structures out of the Martian dirt.

Just when you thought Hubble had done so much recently, this stunner pops up: Check out this amazing photo of a spiral galaxy called NGC 2903. Astronomers study disk galaxies like NGC 2903 because they also have black holes at their center. Through observation and study they seek to better understand the relationship between the galactic cores that are full of stars and the supermassive black holes that tend to form there. There’s another benefit, of course—pretty photos!