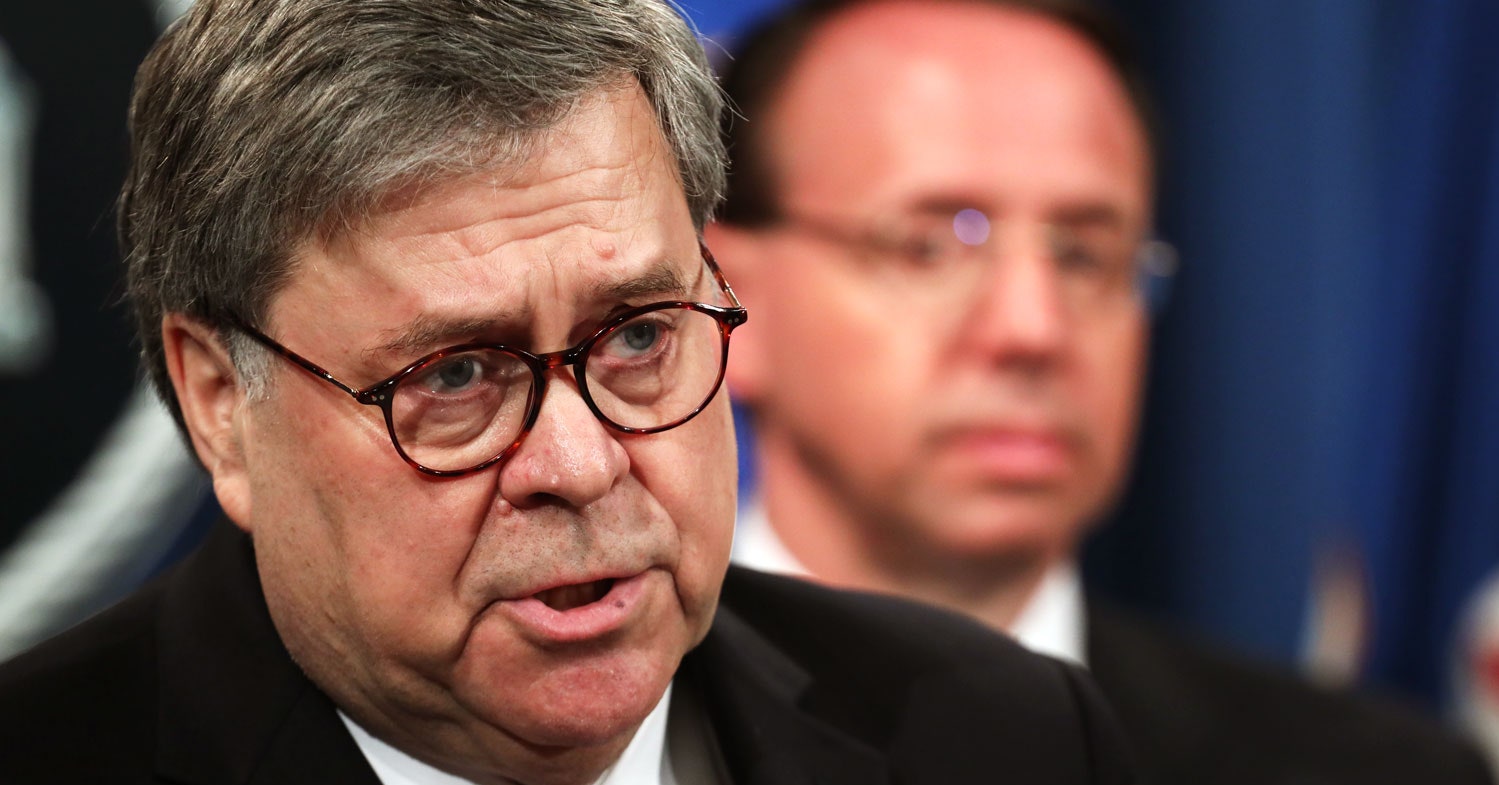 Congrats, you survived another week! And this last one was a helluva week to witness. As measles made an unwelcome comeback, Ann Coulter suggested she’d vote for Bernie Sanders, a journalist got killed during a riot in Northern Ireland, and scientists got into the business of reviving dead pig brains. What’s going on? How is it the end of April already? The days are flying by. In case you blinked and missed it, here’s what else happened in the past seven days.

Sing the Bells of Notre Dame

What Happened: A literal piece of history was nearly destroyed last week when Paris’ Notre Dame Cathedral went up in flames as the result of an electrical short-circuit.

What Really Happened: The week started with an unexpected tragedy across the Atlantic, as midway through Monday reports started to appear that Notre Dame Cathedral was on fire. The news quickly spread across the internet, as people tried to come to terms with the seeming destruction of the building, which is more than 800 years old.

Even as firefighters struggled to get the blaze under control—and save the priceless antiques and artwork inside the cathedral—Parisians came out to demonstrate how important the national monument was to them.

The day after the fire, there was some surprising good news to be found.

Indeed, it wasn’t just one of the iconic windows that had survived; it was all three, which almost seems like … a miracle, really. Meanwhile, reconstruction efforts were immediately announced, and they were ambitious.

To put the five-year timeline in perspective, experts were suggesting that 40 years was a more realistic estimate. The reconstruction would be aided by what might be considered an unlikely fortunate coincidence.

Any such efforts to rebuild, ambitious or otherwise, were to be well-funded, as it turned out.

Beyond the kindness of billionaires, corporations and cryptocurrencies also helped out. Of course, such largesse invoked a certain sense of one-upmanship for certain world leaders.

For anyone thinking, Wait, couldn’t the US use that money?, you weren’t alone.

The Takeaway: As it happened, the president had some other words of wisdom for the French when Notre Dame started burning, even if they weren’t entirely wise or gratefully accepted by their intended audience.

Was Mueller’s Report Worth the Wait? Maybe

What Happened: That thing that a lot of people never thought would actually come to pass? At the start of this week, it was revealed that there was a date for it to actually happen, with Monday bringing news that the Mueller report was just days away.

What Really Happened: For weeks now, folks in Washington have been, shall we say, upset that Special Counsel Robert Mueller’s report on Russian election meddling had been submitted to Attorney General Bill Barr but not available to the public. Indeed, you might remember Barr promised that a redacted version of the report would be released to Congress by mid-April. Hey, guess what this week was…

President Trump, who’d previously said he was completely cool with the report being released with no redactions, seemed to be entirely on board with this plan. J/K.

Why the change of heart? Well, the rumor mill had a potential answer to that question.

Remember that tidbit, because we’ll come back to it soon enough. After the news Monday that the release was forthcoming, further developments on Wednesday suggested that more was underway than many might have anticipated.

Wondering why there are two versions? The answer had something to do with a familiar face for longtime fans of the show.

It was also revealed—initially by the president himself, and later confirmed by the Department of Justice—that Barr would be holding a press conference ahead of the report’s release, which seemed suspicious to some. (Not least of all because Mueller would not be participating.)

Oh, and remember that the White House and Barr’s office had meetings to discuss the report? That turned out to be a whole thing, as well.

The Takeaway: We know what you’re thinking: If only someone could have capitalized on all of this pre-release hype to advertise their product! Don’t worry, Barnes & Noble is way ahead of you.

Just Who Does the Attorney General Work for, Again?

What Happened: As if Bill Barr hadn’t demonstrated that he was hardly the most independent attorney general with his four-page summary of the findings of the Mueller report last month, his press conference ahead of the release called his allegiances into question even more.

What Really Happened: So let’s jump ahead to Attorney General Bill Barr’s actual press conference on Thursday. To say that it went as expected would be an understatement, if only because it arguably undersells what people were actually expecting from the whole thing. Is it enough to just point out that former Department of Justice spokespeople called it disgraceful or that Democratic lawmakers called for Barr’s resignation after? Perhaps so, but we might be getting ahead of ourselves. The press conference started with what seemed to be simple factual statements —

—before transforming into a repeat of Barr’s already controversial four-page summary—that wasn’t actually a summary, it was later claimed—of what he said Mueller found.

Still, even in this attempt to argue in favor of the president, new facts emerged.

In other words, there’s a lot for Congress and, arguably, other investigators to look at in the findings of the special counsel. But let’s go back to why Attorney General Barr made that determination for a brief second: It’s because the president’s feelings were hurt, apparently.

Was Barr convincing in his explanations? Judging by people’s reactions to his performance, not really.

In fact, Barr was so over-the-top that even Fox News pointed out that he seemed more like an attorney for the president than, you know, the Attorney General of the United States. So there’s that.

The Takeaway: Was this a high watermark for the Department of Justice? Probably just the opposite. But that’s not to say that the press conference didn’t succeed in its actual purpose.

What Happened: After two summaries, a press conference with Bill Barr, and all kinds of reporting, it might be tempting to prejudge the release of the redacted Mueller report as a non-story. That would be a mistake.

What Really Happened: So, when the Department of Justice finally released the Mueller report, there was a rush to see if it contained any new information worth sharing. Let’s just say that there really, really was. A lot of information, actually.

No, really; all the redactions aside, there was a lot to learn.

And that’s just what reporters discovered in the first few hours after the 448-page report’s release. (It helped, of course, that everyone seemed to want to break it down.) In case all of the above wasn’t particularly damning for the president, there’s always this little excerpt.

Ah, yes; the common refrain of someone who is totally innocent. Perhaps you’re looking for a more high-level view. Don’t worry; we’ve got you.

Oh, maybe you meant this:

Actually, maybe you meant this:

In response to all of the new revelations in the actual report, lawmakers suggested that the whole story was just beginning, all told.

Just imagine what might be in that un-redacted report!

The Takeaway: Meanwhile, if you’re wondering how President Trump took all of this as it was unfolding on Thursday, it went surprisingly well. (Don’t worry; he really started spinning out on Friday.)

Back in the Game

What Happened: In case anyone had any doubt about the scale of Game of Thrones‘ cultural dominance, the return of the show for its final season leveled anything and everything before it. (Official disclaimer: The best coverage and analysis can be found on WIRED, but you knew that already.)

What Really Happened: If one pop cultural moment ruled the week, it wasn’t Beyoncé’s Netflix documentary (though that came close), but rather the much-anticipated return of the HBO’s Game of Thrones for its final season. In fact, when the first episode of the season aired, this happened.

Well, it’s not as if the internet was obsessed with anything special that happened on the episode or anything.

No, wait, we meant this.

Yes, Bran Stark proved to be the meme-iest character of all upon the show’s return, somehow. Perhaps some people just really like creepy stares? It’s not all fun and games, though; some people were concerned about poor Bran.

The Takeaway: Still, at least the actor who plays the unsettling little Stark is on board, so that counts for something, right?