The Queer Rights Movement Faces Down the Supreme Court 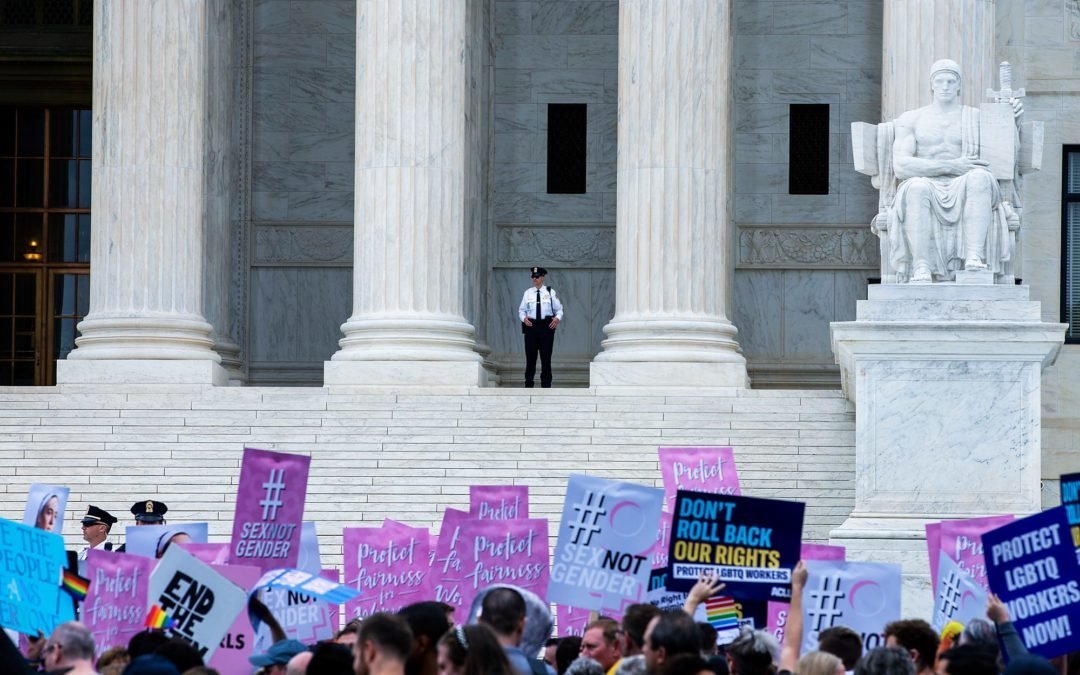 Earlier this week, under the wide steel-gray skies of Washington, DC, the streets encircling the US Supreme Court Building were animated by a rising tide of color and righteous fury. Protesters had gathered in a sea of doughy pink, electric blue, sunshine yellow, and iridescent tangerine, thousands waving signs that exclaimed “We the People Means Everyone” and “Trans Rights Are Civil Rights Are Human Rights.” Others were shouting for justice and equality, all of them of a single accord: that fair treatment be granted to the two gay men and one trans woman whose cases—which involve the matter workplace discrimination, sexual orientation, and gender identity—had found their way to the nation’s highest court.

In the oral arguments presented before the nine justices, two gay men insist that they were fired on the grounds of their sexual orientation. One of the plaintiffs, Gerald Lynn Bostock, was let go after his coworkers learned that he joined a local gay softball team. Another, Donald Zarda, a skydiving instructor, was also fired when his employer was made aware that he is gay. Aimee Stephens, meanwhile, claims she was fired from her job at Harris Funeral Homes when she notified her employer that she was a trans woman, explaining in a letter that she “decided to become the person that my mind already is.” Technically, workplace discrimination is illegal under Title VII of the 1964 Civil Rights Act; it forbids discrimination based on race, national origin, religion, and sex. How that law is interpreted is, well, another matter.

The cases are the first LGBTQ+ rights cases to reach the court since President Trump appointed Justices Neil Gorsuch and Brett Kavanaugh. As Intelligencer’s Irin Carmon noted, they represent “a moment of terrifying historical weight” in which the bench must roughly “answer the question of whether a person can be fired for being the wrong kind of woman or man.” The landmark ruling is likely to signal just how the court, which leans conservative, will shape queer rights in the years ahead.

Specifically, if Stephens loses her case, the ruling will have a significant impact on trans women of color, who already encounter disproportionate degrees of violence, harassment and discrimination, and are increasingly refused access to health services and career opportunities.

Outside the court, photographer Tasos Katopodis captured history in motion: the tide of protesters rising against a government that, at times, can feel unmoved and stubbornly moored to the ideals of the past. The contrast is perhaps the image’s most transfixing characteristic. There’s a delicious sense of scale to it—everyone seems so small juxtaposed with the stony immensity of the building—but, really, the photo’s most vivid lesson is in what we witness in the above and the below. Atop the steps there stands a lone officer, pea-sized amid the large columns, surveying the tempest beneath. The framing in the top half of the image, its stark whiteness, evokes the terrible gravity of history: This is how it was, and this is how it shall remain.

But the current of progress—teeming with color and radiance, with a belief in a more equitable world—rages and rages. And it’s there, in that rage, where we can see a glimmer of the future. Establishments of order begin to quake and the laws of the past are threatened with collapse. The current clashes against all that is old and obsolete. The rage intensifies, grows louder. The tide rises more. It won’t soon go quiet.