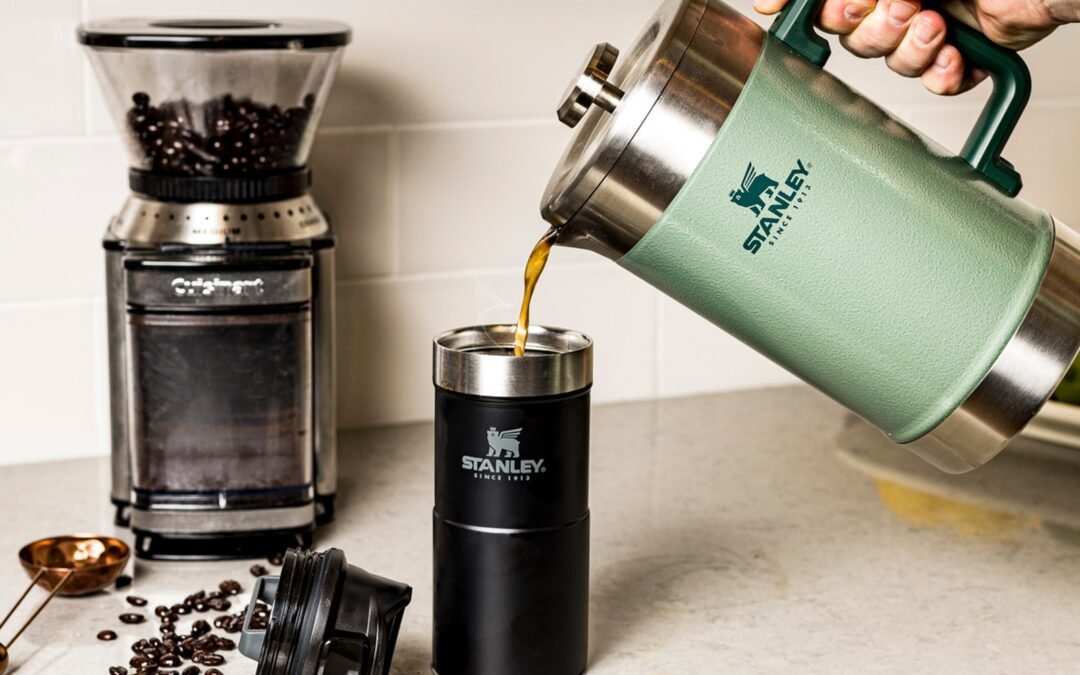 For something completely different, I tried the Espro P7, which, with those two fine filters, produced a surprisingly clear cup with even fewer fines. It’s like coffee-maker coffee for people somehow forced to make only French press, or for campers too far from an outlet to plug in Mr. Coffee. This “clean cup” isn’t a bad thing, but it’s certainly different and perhaps not exactly what French press fans, myself included, want from a press pot. The Espro’s double interlocking baskets are one more thing to clean, but I guess you’d get used to it.

For another outlier, I tried the BruTrek 32 and 48 by Planetary Designs. Despite being drawn like a magnet to the lovely blue color, I struggled with the designs of these, wanting to like them more than I did. The lid stopper gives the BruTrek a bit of a sippy-cup feeling, and you need to screw the lid on before you can depress the plunger. Also, with a rounded bottom corner it’s not completely firm on its feet.

I did find its claim to fame to be an interesting idea: the flap on a metal disc above the filter turns it into something of a one-way valve; once the plunger is depressed, the brewed coffee can’t circulate into the grounds and become bitter, theoretically allowing you to keep the coffee in there longer without it becoming a bitter mess. (The company calls this feature Bru-Stop.) Yet even for me, an appreciator of the ever-so-slightly-sludgy cup, this was a bit much, as the filter let a surprising amount of fines through. This was especially odd as those extra fines in the coffee seemingly negated the work of the flaps. The larger flaw, in my book, is that the BruTrek isn’t dishwasher safe. Not a big deal when you’re camping, but that’s a deal breaker at home.

Finally, there was the “Hulk” prototype, which struggled mightily. The big problem was the hairline crack I discovered after putting it in the dishwasher. When I removed the brewer from the dishwasher, I could hear water sloshing around in the space between the interior and exterior walls. The only effective way I found to expel that water was to fill the brewing chamber with hot water, thus heating the air in the space between the walls and causing the water to squirt from the crack in the bottom corner. Furthermore, the lid was quite difficult to horse off the rest of the vessel, which is not something you want when dealing with hot, wet grounds.

Around this point, just to say I did it, I filled all five presses with just-boiled water, put the lids on and set a timer for an hour. They all emerged at least hot enough for steam to come off the top when I lifted the lid. The Bodum was lowest at 156 degrees Fahrenheit, but cut it some slack! It was half the size of the competition, and I’m feeling protective as I explain it. The Hulk and Espro came in at a just-fine 160 and 165 degrees, respectively; the Stanley Stay Hot stayed an impressively hot 175. At 185 degrees, this was the BruTrek’s moment to shine. If you’re not going to put your coffee in a thermos after you brew it, and the hottest coffee for the longest time is your highest priority, this might be your best bet.

After all of my in-home testing, I was most happy to discover that while there were a few nits to pick and stylistic variations here and there, all the machines seemed to make a pretty good cup of coffee. So at this point, I brought in some coffee pros from Olympia Coffee for some socially distant testing.