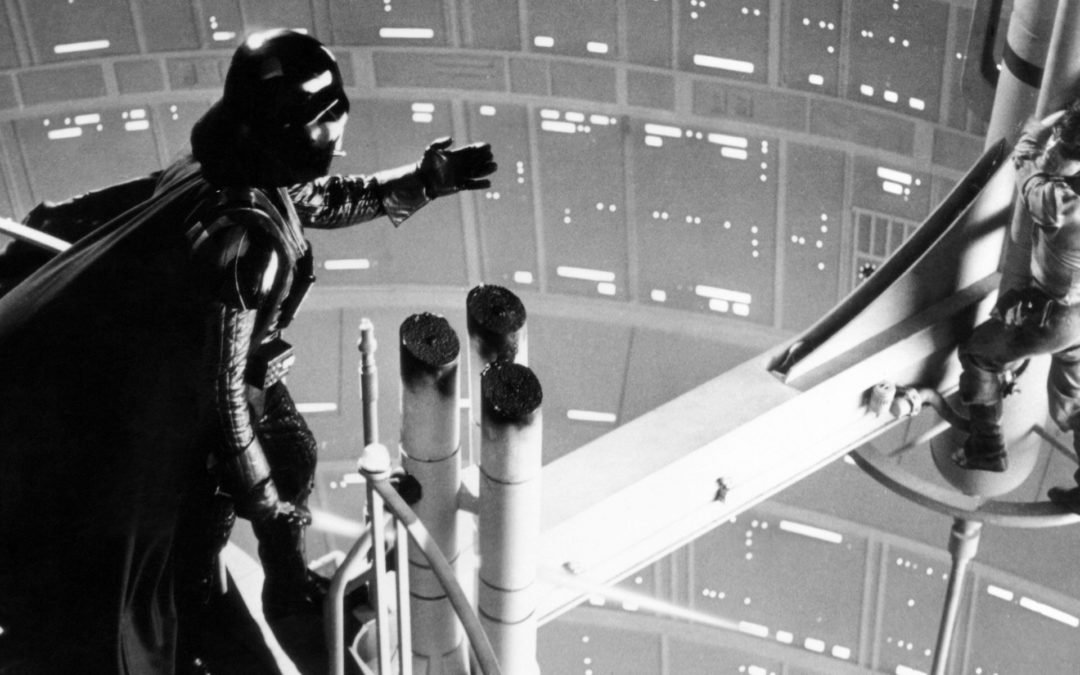 May the Fourth Be With You. That’s Star Wars Day, May 4. Now for some Star Wars physics—because that’s what I do. Yes, I have a bunch of Star Wars physics (here is a list). But since this is a special day, I needed a special analysis. How about an analysis of Jedi jumps in the Star Wars movies?

The Physics of Jedi Jumping

If you watch Star Wars Episode IV, there are zero Jedi jumps. What is a Jedi jump? You know—when someone who can use The Force jumps way higher than a normal person could jump. That’s a Jedi jump. Remember when Luke jumped out of that carbonite freezing chamber in The Empire Strikes Back? That was a Jedi jump. There aren’t too many Jedi jumps in the original trilogy—but then the prequels showed up with tons of jumps.

Of course with a human jump, I can look at the total time off the ground (the hang time) as well as the jump height. Since the only force acting on a real human on the real Earth is the gravitational force, there is a constant downward acceleration with a value of about –9.8 meters per second per second (m/s2). This means that after leaving the ground, the person would move up while slowing down. After coming to a stop for an instant at the highest point, a human then moves down while speeding up. This is your classic case of physics projectile motion.

What about about a Jedi? Jedi don’t care about your silly laws of physics. They jump however they want. That means that it’s up to me to figure out what they are doing. For the purposes of this study, I am going to break all of the Jedi jumps into two parts—a moving up motion and a moving down motion. The Jedi will start at some vertical position, reach some maximum height, and then return to a final position (this is just looking at the vertical motion). Here is a diagram.

So, for each jump I am going to measure these five things. I will find the start, highest, and final position. Then I will find the time interval it takes to go from the start to the highest position and the time it takes to go back down to the final position. Yes, I actually did this. Oh, it wasn’t easy. There are many jumps where I really had to just guess the distances. Even the times aren’t always simple to determine. This is especially true when the camera shows the start of a jump and then switches to something else. But I did it—for you.

Now let’s take a look at the data.

Here is a trivia question for you. How many Jedi jumps were there in Episode IV—A New Hope? The answer: zero. What about the other movies? Here is a graphical answer.

This should surprise no one. There are a bunch of jumps in the prequels—for two reasons. First, there were more Jedi in the prequels (before they were killed—oh, SPOILER ALERT). The second reason for more Jedi jumps in episodes I–III is that they relied more on digital effects. It’s easier to make crazy jumps if you do it digitally instead of in real life.

OK, let’s be clear. In some cases the Jedi doesn’t jump up, but rather jumps down off some ledge or something. This might seem like it shouldn’t count as a jump, but I’m counting it.

Here is a histogram of the jump heights for all the Jedi jumps.

The average jump height is 4.6 meters with a standard deviation of 7.2 meters. Really, the problem is these two huge jumps. There is the jump by Obi Wan in Episode II when he falls off the building thing during his fight with Jango Fett. The other large jump is Mace Windu in the battle on Geonosis (also Episode II).

Oh, there is also Anakin’s jump from a speeder at the beginning of Episode II. I didn’t count this as a jump since it seems clear that it’s more like skydiving without a parachute.

Here is a plot of the ranges for the jump hang times.

This gives us an average hang time of 1.26 seconds with a standard deviation of 0.98 seconds.

Now for some real physics. When you look at a real jump, there are three things to consider (this is true for video analysis).

If you know two of these three things, you can find the third. For these Jedi jumps in Star Wars, it’s plausible to estimate the distance scale by looking at things like Ewan McGregor (height of 1.78 meters) or Liam Neeson (height of 1.93 meters). Yes, those are real humans, but I can still use them for distance scales. Also, it seems that all scenes (except for the one of Rey jumping in the trailer for Episode IX) are in real speed and not slow-motion. This means that the playback video frame rate gives the time scale.

Rhett Allain, an associate professor of physics at Southeastern Louisiana University, writes about physics for WIRED.

Where the Δy is the change in height and the Δt is the change in time. I can use this for both moving up in the jump and down. But since I have a fraction, this suggests that if I make a plot of the jump height vs. the time squared I should get a straight line. In fact, if I plot two times the height, then the slope will be the acceleration. But should the acceleration even be constant such that we get a straight line? On Earth, yes—this would be a straight line with a slope of 9.8 m/s2. For Jedi jumps, we just have to make the graph.

Here is that graph. Oh, since these are Jedi the upward acceleration and the downward acceleration don’t have to be the same thing. For jumps that go both up and down, I am going to break these jumps into two separate data points.

Let me make some comments regarding this graph.

But wait! How about some homework? Really, this homework isn’t for you. It’s for me. These are things that I can do in future explorations. Maybe I will save this for Star Wars Day next year.