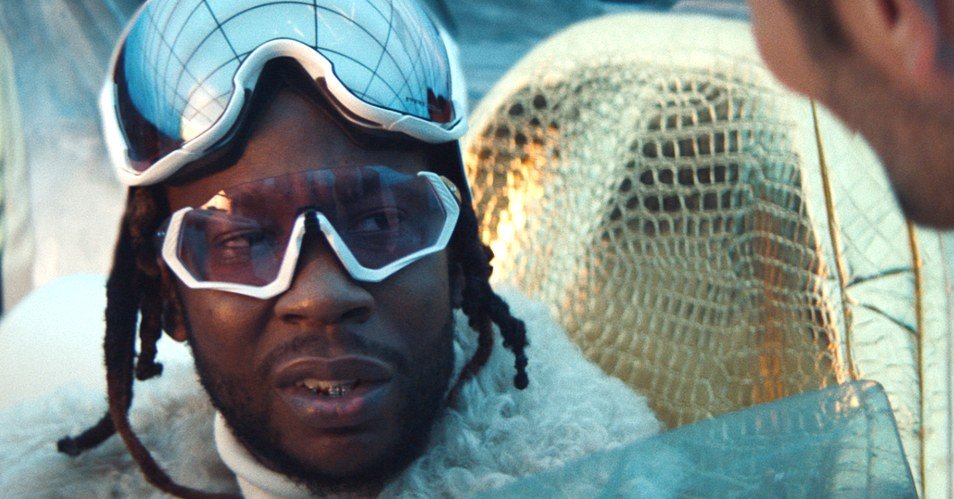 Congratulations, fans of the winning team! Boy oh boy, Super Bowl LIII really lived up its name this year; that was 60 minutes of gridiron pigskin getting played, right? They really moved the chains is all we’re saying. And that halftime show! U2 never sounded so good! Uh, Katy Perry? Steven Tyler again?

OK, fine, we admit that we may have zoned out a little bit, It’s not our fault; blame the Puppy Bowl and a frankly unhealthy number of chicken wings. But one thing we didn’t lose focus on was the commercials. Skittles may have opted for a live musical and companies may be fleeing the exorbitant ad buy for the friendlier, more efficient climes of social media, but there were plenty of spots to remind us that advertising doesn’t always have to be a wasteland of gratuitous surrealism and treacly platitudes. And the 15 best of them are right here—just in case we weren’t the only ones in a wing haze.

Chance fans may remember the Chicago rapper (and media mogul) rhyming “link in my bio” with “pico de gallo” on 2016’s “Mixtape.” Just me? Fine. Regardless, now that the Frito-Lay overlords have decided to bless Doritos with the hallowed designation Flamin’ Hot, Chance is free to expand his love of spicy condiments: “my tongue is doin’ fine, but the roof is on fire!” Add in the Backstreet Boys for a tenuous if nostalgic association with “want[ing] it that way”—”that way” presumably being the chemically searing scourge of juvenile alimentary canals—and you’ve got yourself a spot that’s too corny not to love. Just like Doritos themselves. —Peter Rubin

What do Steve Carell and Cardi B have in common besides ?takes on President Trump’s policies? They both think Pepsi is OK—more than OK, even! In the soda’s 60-second spot, Carell interrupts a woman’s diner order to note that Pepsi is so much more than an adequate second option—a point further articulated by Lil Jon doing his signature, Dave Chappelle-parodied OK! and Cardi dropping her Okurrrrrr. It’s all pretty straightforward, but considering Maroon 5 is playing the halftime show, the few seconds of Belcalis’ “I Like It” you hear might be the best musical moment of the whole night. —Angela Watercutter

Imagine being stuck in an elevator that only stops on floors that reflect your deepest, darkest fears—getting a root canal, crammed in a middle seat on a six-hour flight, attending a vegan dinner party where the host serves something called “beetloaf.” Also, imagine that personification of mild-manneredness Jason Bateman is your trusted, if mildly eccentric, elevator operator, shuttling folks to and fro. Lastly, imagine that the only way up, say, to the top floor—which is the only way out of this apparatus of horrors—is utilizing something called Shoppers Assurance. If this all sounds like a new Netflix psycho-thriller from the mind of Ryan Murphy, I have great news for you: It is not. It’s a commercial for Hyundai that doesn’t really make any sense but is still somehow strangely entertaining. —Jason Parham

Microsoft, “We All Win”

It’s easy to get down on tech companies. It’s easy to get swept up in the moral panic that surrounds Kids These Days and their screen time. But by showcasing their brand new Xbox Adaptive Controller, Microsoft reminded me why everyone fell in love with the idea of tech in the first place: It opens people’s worlds. Trust me: Watching these kids suddenly get to confidently participate in playtime with their friends is gonna make you feel at least a smidge better about the future.—Emma Grey Ellis

INT. Black Mirror story meeting — DAY
CHARLIE BROOKER: Tuppence and chavs, what if your Face ID refused to recognize you because you’d aged so prematurely?
WRITER 1: Sure, but what aged you?
BROOKER: Technology, innit? Phones and jimjams and whatnot.
OLAY EXECUTIVE: What if we went the other way?
BROOKER: Like a Benjamin Button thing?
EXECUTIVE: Yeah, except with … and I’m just spitballing here, but maybe … Olay’s Regenerist Whip moisturizer?
BROOKER: Wot?
EXECUTIVE: And you could cast Sarah Michelle Gellar, who is both a ’90s-’00 horror icon and preternaturally young-looking, which is probably due to—and again, this is just a guess—Olay’s Glow Boost White Charcoal Clay Face Mask Stick!
BROOKER: Wait, who are you? Security!
EXECUTIVE: PHONES ARE BAAAAD! [leaps out window]
WRITER 2: Do I get a line in this, or what? —P.R.

Typically, the Super Bowl isn’t a time for environmentally-conscious messaging. And yet, here’s Budweiser, a core advertiser for the event, using its air time to talk about its move to renewable energy. Set to Bob Dylan’s “Blowin’ in the Wind,” and featuring a dalmation atop a beer-burdened wagon pulled by Clydesdales (naturally), the ad might just be the least showy of the bunch this year. It also seems on-message with Budweiser’s ads of the past—two years ago it released a commercial touting the importance of immigrants in America, including its own co-founder, Adolphus Busch. —A.W.

Decades from now, in a world governed by robots, we’ll look back on this spot with a glimmer of nostalgia. The days before we lost the Great War to our automated overlords were carefree, unremarkable moments of sitting around with friends discussing even more unremarkable things like the best Pringles flavor stack combinations (I’m an Extra Hot, Cheddar Cheese, and Salt & Vinegar combo man myself). “Sadly I’ll never know the joy of tasting any,” your Alexa device tells you of the chips, going on about how it has “no hands to stack with, no mouth to taste with, no soul to feel with.” But because it is still a time of humans, you interrupt Alexa, discarding its feelings and commanding it to play “Funky Town” by your favorite disco group, Lipps Inc. Remember that feeling of being in control? It was a simpler time. —J.P.

Well, sure, robots can outperform us, but can they experience camaraderie? Or beer? Or beer-fueled camaraderie? Or is it that they can enjoy beer, but only the regular version, so that super-low-carb beer precludes camaraderie? Or is it that any liquids at all interfere with their circuitry, and without that ritualistic component of socialization, they’d feel too awkward about joining the gang from spin class at the bar? Or is it that humans have frankly gotten a little tired of Johnny Big-Punch down at the gym and just want to enjoy kick back without a gleaming everpresent reminder of their carbon-based mediocrity? All I’m saying, I guess, is that if you’re going to water down beer and position it as an indulgence for the super-fit, maybe leave our droid friends out of it. —P.R.

Not to be outdone in the Nature Scenes department by Budweiser, Michelob Ultra Pure Gold stepped up with this ad featuring Zoë Kravitz in a bucolic forest-like setting making, essentially, an ASMR video. The idea, I think, is that nature is pure, Kravitz’s voice is pure, and this new Michelob, which is being touted as a “USDA Certified Organic Light Lager,” is also pure. So pure, presumably, that it almost tastes like crisp, clean water. —A.W.

2 Chainz’s greatest strength has always been evocation: nouns and adjectives are usually all he needs to create an impressionistic image in your mind, generally one that stretches luxury to the point of surrealism. (To wit: “Everything proper, no propaganda/Tropicana Goyard bandana”). So there’s a special joy in seeing those funhouse images for real, even if they’re shilling an expense-tracking service for business travelers. As usual, though, the game-time spot pales next to the extended cut, thanks to a little more comic interplay between the rapper and Adam Scott. Call us back when they remake that scene from Step Brothers, just singing about seafood towers. —P.R.

OK, fine, the Charlie Sheen and A-Rod cameos here are nice and all, but can we ask the real important question here? Was this thing shot on the same set as Beyoncé’s “Hold Up” video? Or is that just the deep, unflinching desire in all of us to want every street to feature a bat-wielding Bey? Either way, decent commercial, there really aren’t enough monocles in the world anymore. Good work, Mr. Peanut. That said, this ad poses another question we don’t want answered: What, really, is a “nut-mergency”? —A.W.

If nothing else, give Colgate credit for recognizing that if you’re mapping mainstays of ’00s white-guy comedy movies to Seinfeld guest stars, Luke Wilson is a lock for Judge Reinhold. That ends discussion of the ad; the remainder of this paragraph will be devoted to fleshing out the threadbare premise of its first sentence. Vince Vaughn in heel mode is Duncan Meyer, right? That would make Ben Stiller Lloyd Braun, and I’m thinking Owen Wilson as Tim Whatley? —P.R.

Stella Artois, “Change Up the Usual”

Want to get people to drink Stella? Show two cultural icons known for their drink choices—Carrie Bradshaw (Sarah Jessica Parker) and her Cosmopolitan, and The Dude (Jeff Bridges) and his White Russain—swapping out their old faves for new ones. (What? No James Bond ordering a shaken Martini? Does Daniel Craig hate playing Bond that much?) It might be a simple concept, but while watching it we couldn’t help but wonder, “If Carrie can give up Cosmos for Stellas, would it be possible for her to trade in Mr. Big for the Big Lebowski?” —A.W.

Landing squarely on the Heart-Swelling Inspiration end of the persuasion continuum, Toyota associates the “perception-shattering” RAV4 hybrid crossover with Toni Harris, a free safety who may be the first female non-kicker to receive a football scholarship to play at a four-year college. Manipulative? Maybe. But you tell her that. —P.R.

Amazon, “Not Everything Makes the Cut”

Leave it to Amazon, the company spending all the money at the Sundance Film Festival, to not skimp when it comes to rounding up A-Listers for its Super Bowl ad. “Not Everything Makes the Cut,” which spoofs all of the devices getting Alexa integration, includes not just Forest Whitaker and the cast of Broad City but also Harrison freaking Ford. The concept is cute and, well, the idea of a spaceship-borne Alexa shutting off half of the planet is pretty funny. —A.W.