Calculate How Fast Quicksilver Is Moving in *X-Men Apocalypse* 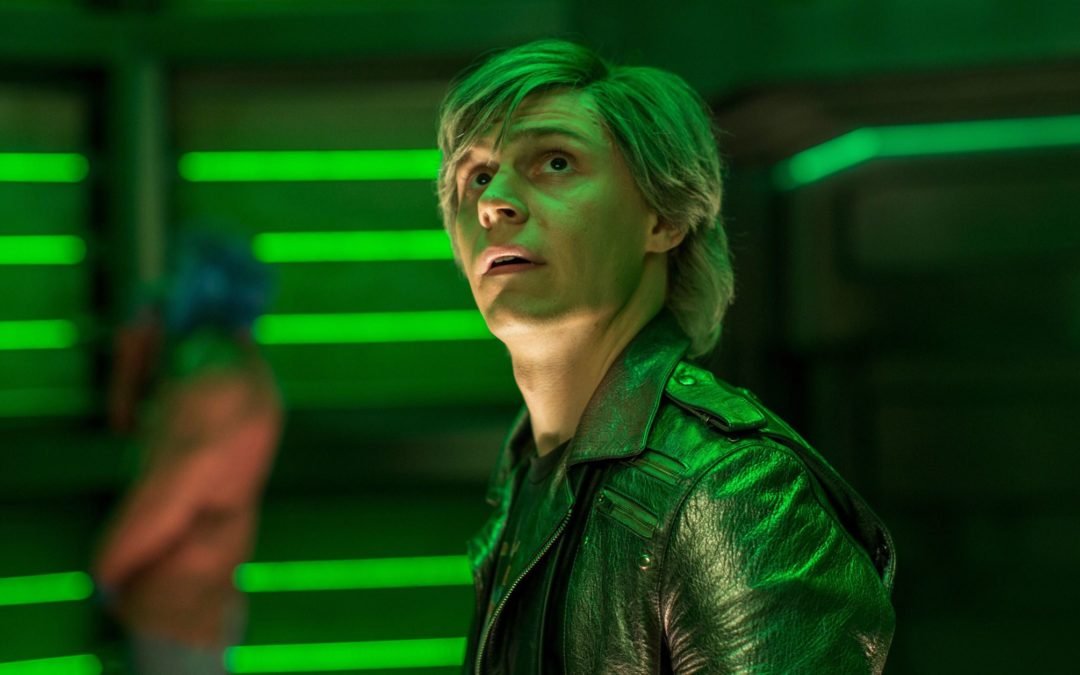 Just how fast is the X-Men character Quicksilver, also known as Peter Maximoff (and son of Magneto)? This would be a popular topic of debate at the comic book bar—if a comic book bar existed. It such a bar does exist, I have to go.

We can take a crack at answering this question, starting with a scene from the 2016 movie X-Men: Apocalypse. In it, Quicksilver arrives at Xavier’s School for Gifted Youngsters (the X-Men mansion). Right as he gets there, he realizes it’s in the process of blowing up. That means it’s up to Peter to save everyone. He makes multiple trips in and out of the mansion to bring the students out to safety. And this is where I will estimate his speed.

Suppose I run across the yard, touch a tree and then come back to where I started. If I know the time this takes and the total distance, I can calculate the average speed as:

That seems straightforward, but I need to point out that this is the average speed. That’s what you get when you divide the distance traveled (Δs) by the time it takes (Δt). Do not confuse this with the average velocity. Normally, when we say average velocity we are talking about the vector velocity. This depends on the starting and ending position of the motion. If I run to the tree and back, my average velocity would be the zero vector.

Now I just need to estimate the distance and the time and boom—I have the average Quicksilver speed. Of course that sounds simple, but there are some problems. I’m going to need to estimate some things. Such as:

Let’s start with the easiest estimation—the time. Quicksilver seems to (somehow) notice the explosion right when it starts inside the mansion. I have no idea how he knows it exploded. He can’t possibly hear it because the sound would travel with the shockwave. Also, he can’t see the explosion since it’s inside the mansion. Oh well. I guess it doesn’t matter. But still—the total time has to be the time it takes for the shockwave from the explosion to expand to the outside yard. That’s how much time Quicksilver has to get everyone out.

So, just how fast is an explosion? Of course this is no ordinary explosion. It’s somehow connected to his nemesis, Apocalypse—it’s not some conventional chemical-based explosive. But still, that’s a good place to start. The speed of an expanding shockwave is called the detonation velocity. Luckily, Wikipedia has a table of detonation velocities.

Now I need the explosion distance. Let me call this dy (for distance to the yard). I have no idea where this mansion is, so I’m just going to guess the distance is 100 +/- 50 meters. Just to be clear, with this notation that means the real yard distance is somewhere between 50 meters and 150 meters. I can put these two estimates together to get the total saving time.

I’m not going to put values in just yet. I’ll do that at the end. But the next thing I need to estimate is the total number of trips Quicksilver makes into and out of the mansion. This isn’t too difficult, because you can just watch the clip and count the number of times he grabs someone (sometimes he grabs two people). Using my fingers and toes, I count 21 trips. I will call this variable N and let it be equal to 21 +/- 1 (in case I added one or missed one).

Now that I have the number of trips, the trip distance (to the yard), and the total time, I have just about everything I need. I can divide the total explosion time by the number of trips to get the time for one trip. The only problem is that this doesn’t quite work. Quicksilver has to act like a kid and stop and play with stuff while saving people. I can’t really estimate the time he wastes since the movie is playing in slow motion. Instead, I am going to estimate the percent of the total time wasted. Let’s call this Pw (percent wasted) with a value of 10 +/- 10 percent. That means the time for one trip into and out of the mansion can be calculated as:

Now for the final expression. This is what you have been waiting for. This is the expression for the speed of Quicksilver.

That’s a nice equation. I like it. Notice something here? The yard distance doesn’t matter (it cancels). Since both the total time and the total distance depend on this yard distance, it doesn’t factor into the average speed. See—we estimated that for nothing.

But here comes the best part. Now that I have both estimates and uncertainties for the estimates, I can get a value for Quicksilver’s speed WITH UNCERTAINTY. Yes, I can get a range for his speeds. It’s going to be great. So, how do you calculate the speed when the quantities have uncertainties? This is the nightmare of your introductory physics lab course. But wait. I am going to make it simple. I will use the “crank three times” method for calculating uncertainties. Here’s how it works.

For the final answer, I will report the plain speed, and the uncertainty in this speed will be the average of the deviation from the maximum and minimum values. That’s it. Let’s do it. Of course I am going to write this up as a python script—both because it’s easier and because that means you can change the values if you like (I know you want to change stuff).

OK, just to be clear. That gives Quicksilver a speed of 280 +/- 188 kilometers per second (or, if you insist on thinking in miles per second, 174 +/- 117 mps). Yes, that’s way faster than the speed of sound, but way slower than the speed of light. That’s about the right range of speeds. But wait. There are too many questions left unanswered. Here are some homework questions.

One last point. I don’t think Quicksilver runs fast. Instead, I think he has the ability to control time. He can make time slow down around him such that it looks like he is running fast. That means that he doesn’t have to have super high accelerations or coefficients of friction and stuff. But who cares how he works. He’s still a superhero.