Christina Koch and Jessica Weir: The Stellar Women of the ISS 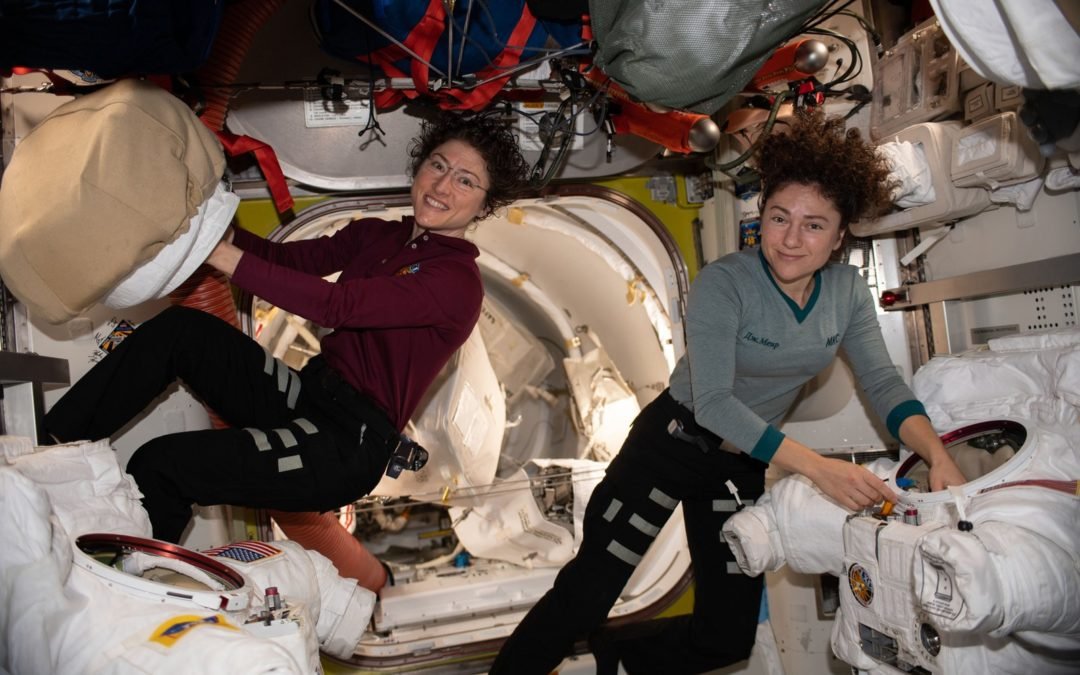 After clocking 328 consecutive days in space, NASA astronaut Christina Koch landed safely back on Earth the week before last. Her trip was the longest-ever single spaceflight mission for a woman, and she did it for science: NASA needs to study the long-term effects of spaceflight on the human body in preparation for eventual stays on the Moon and missions to Mars. Bodies, see, they’ve gotten kind of used to functioning in a gravity-based environment, and when they’re transported to microgravity or zero g’s, things get out of whack. Your heart beat changes because your ticker blorbs into a sphere, your eyes change shape making your vision worse and your body generally goes catawampus due to the lack of gravity. One of Christina Koch’s main experiments was focused on bone health and why vertebrae tend to break after long duration flights; this kind of high-level (so to speak) guinea pig work could help doctors keep future astronauts healthy. This week we are going to float around with Koch and her pal and crewmate, Jessica Weir. Don’t forget your helmet! 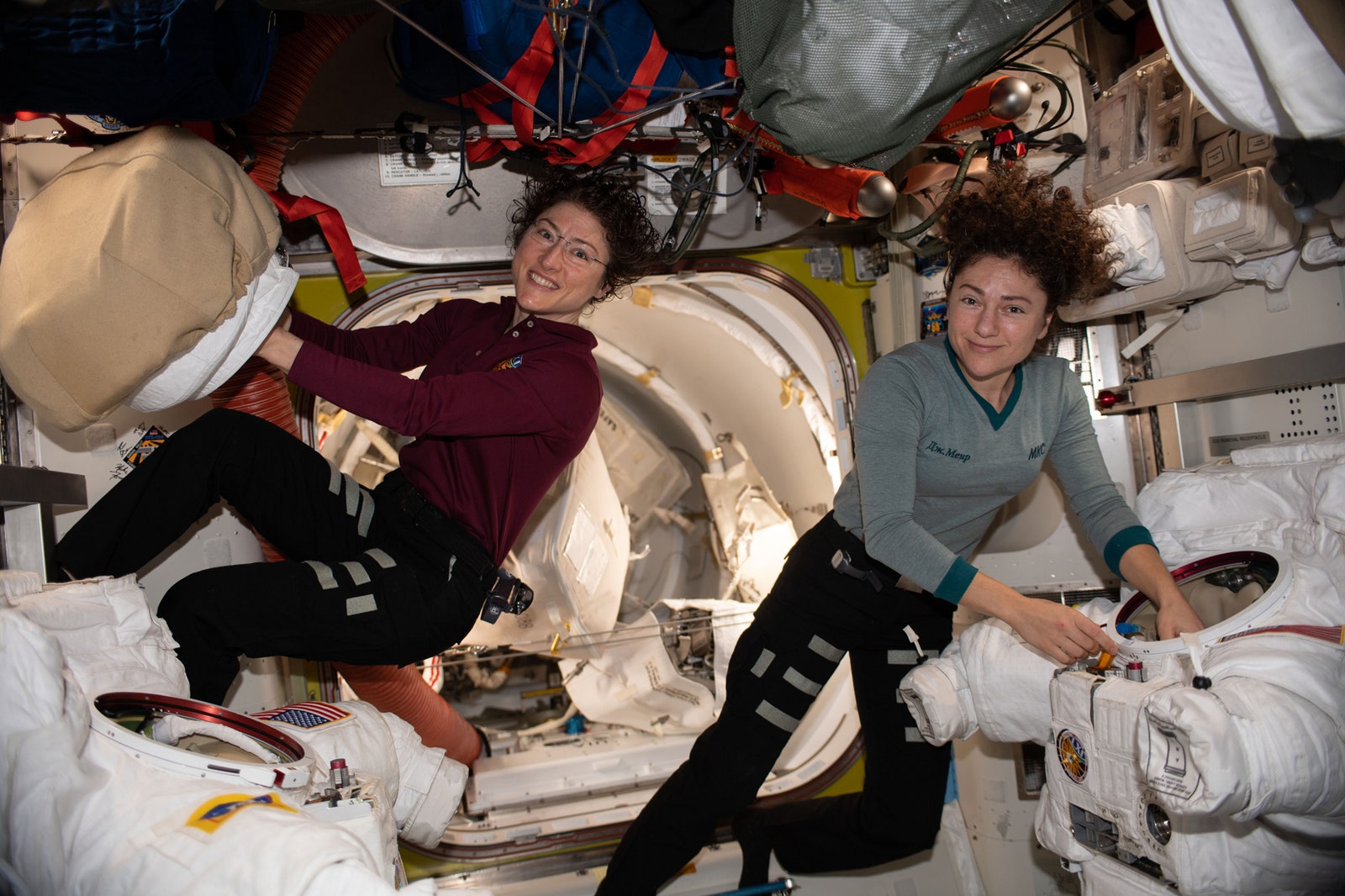 Astronaut Christina Koch (left) and Jessica Weir are prepping their space suits a few days before the second all-female space walk on January 15. (They spent seven hours out there replacing some lithium batteries on the station.) The two astronauts are also best friends and made history by completing the first all female spacewalk in October 2019. Just stuff normal friends do.Photograph: NASA 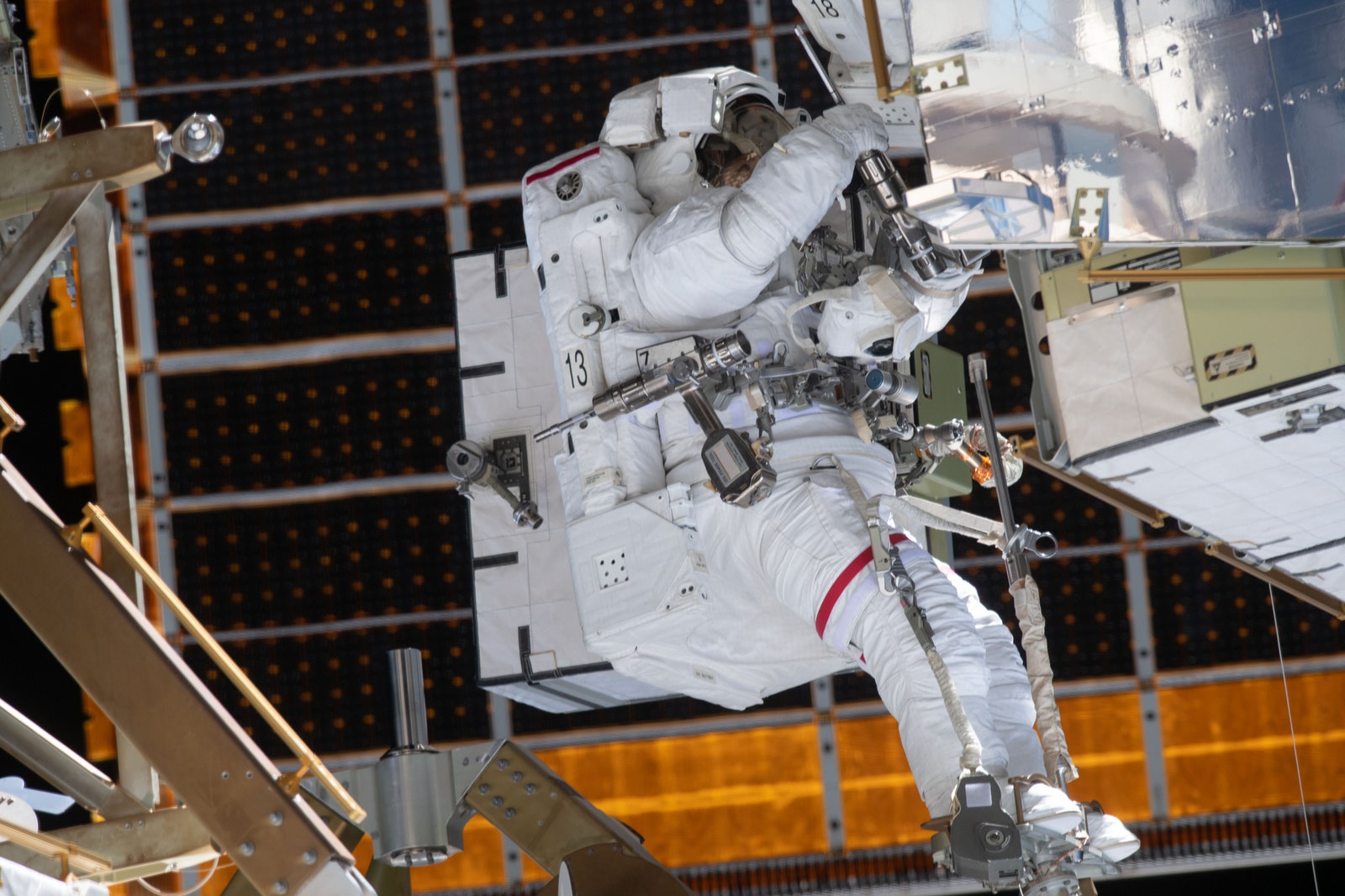 This is Weir upgrading a power system on the ISS. Views like this give you some sense of how difficult it is to do manual work wearing huge gloves and a big spacesuit whilst perching on a teensy foothold.Photograph: NASA 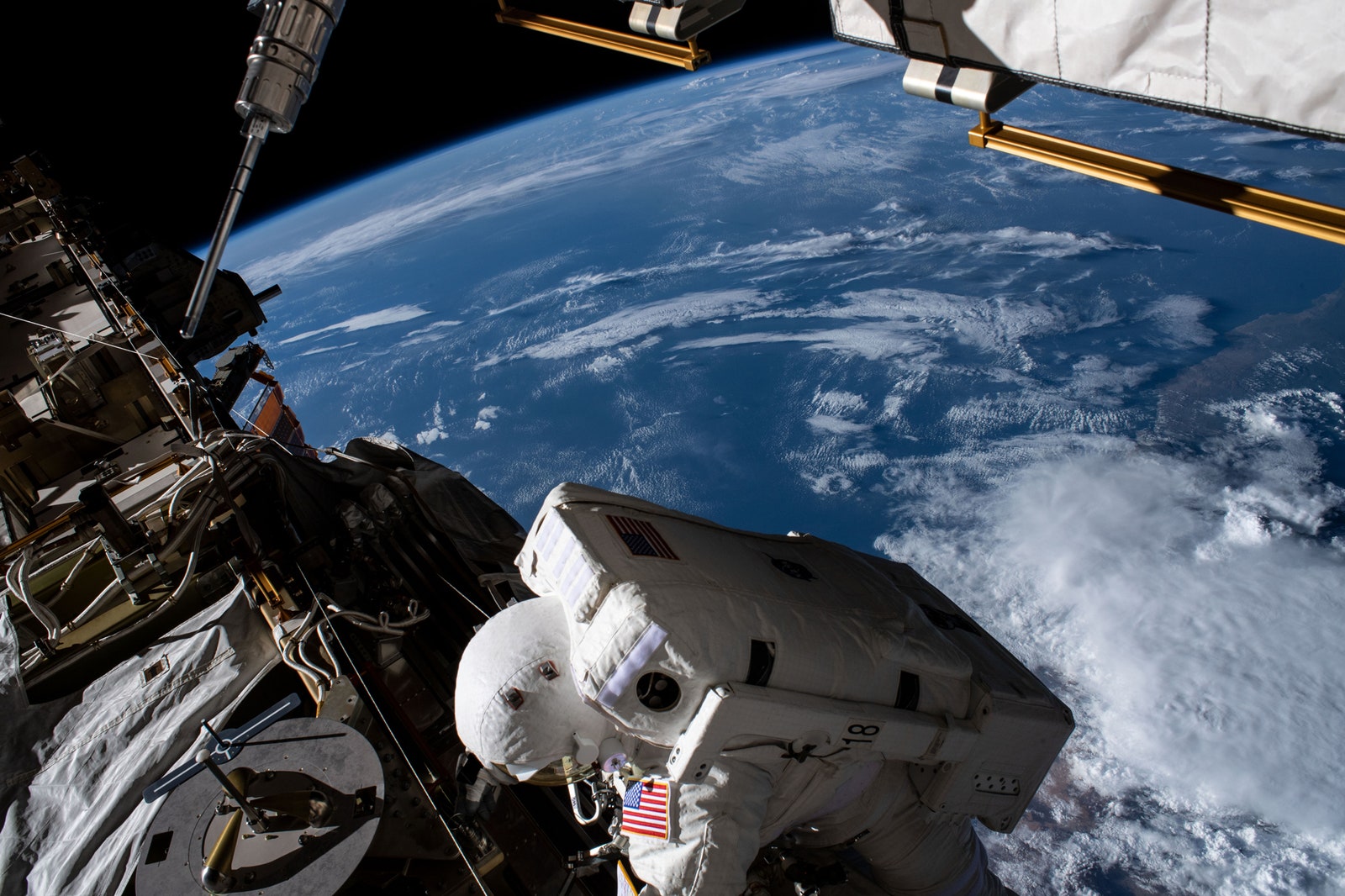 This is Koch strapped to the outside of the ISS replacing the lithium ion batteries that are charged by the ISS’s massive solar panels. Weir is around the corner completing the same task. Behind Koch you can see the Atlantic Ocean off the coast of Africa. Talk about an office with a view.Photograph: NASA 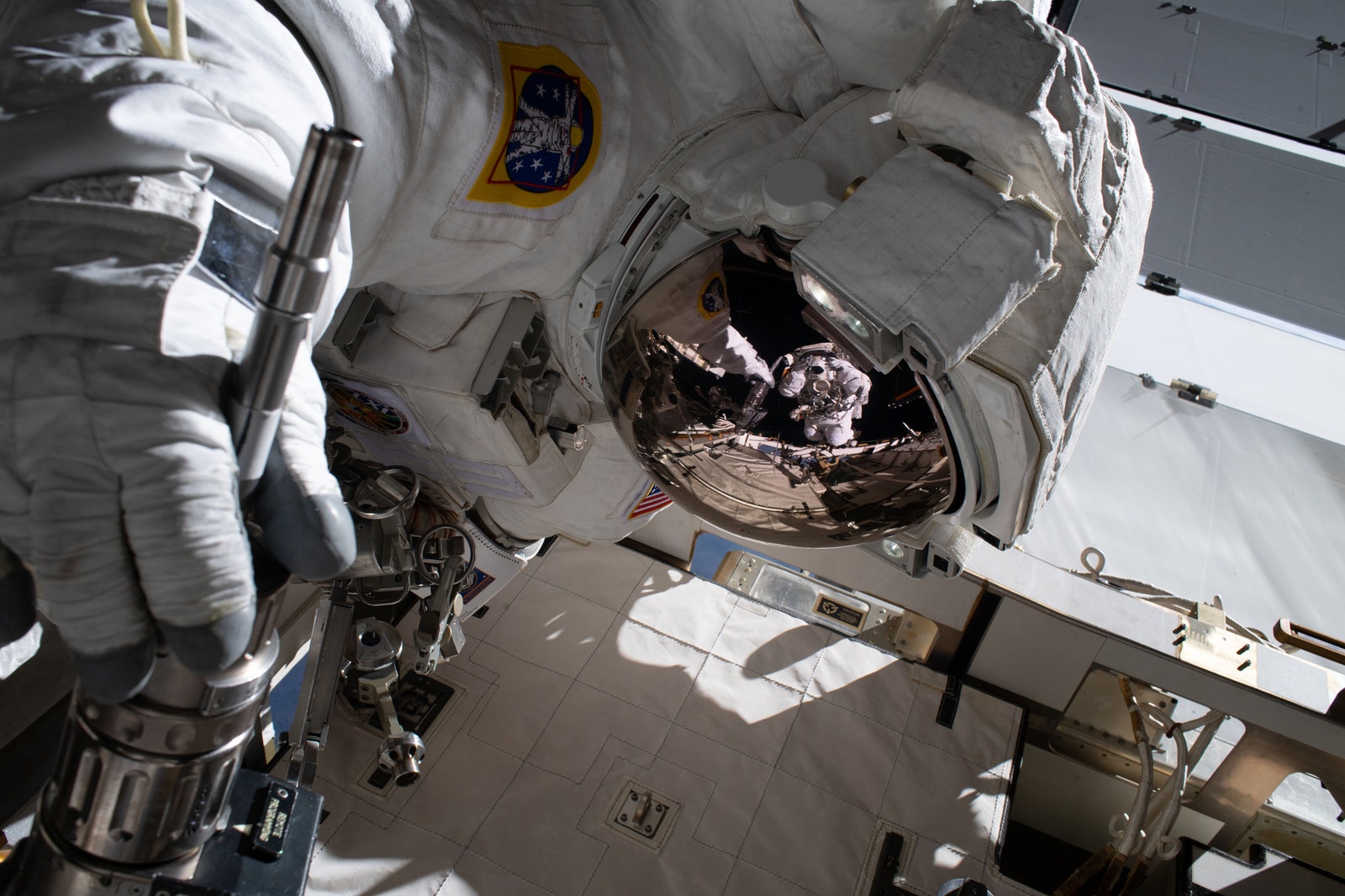 This accidental artistic photo shows two astronauts: Weir is working on battery replacement, and Koch, who took the photo, is captured in the shiny reflection on Weir’s visor.Photograph: NASA 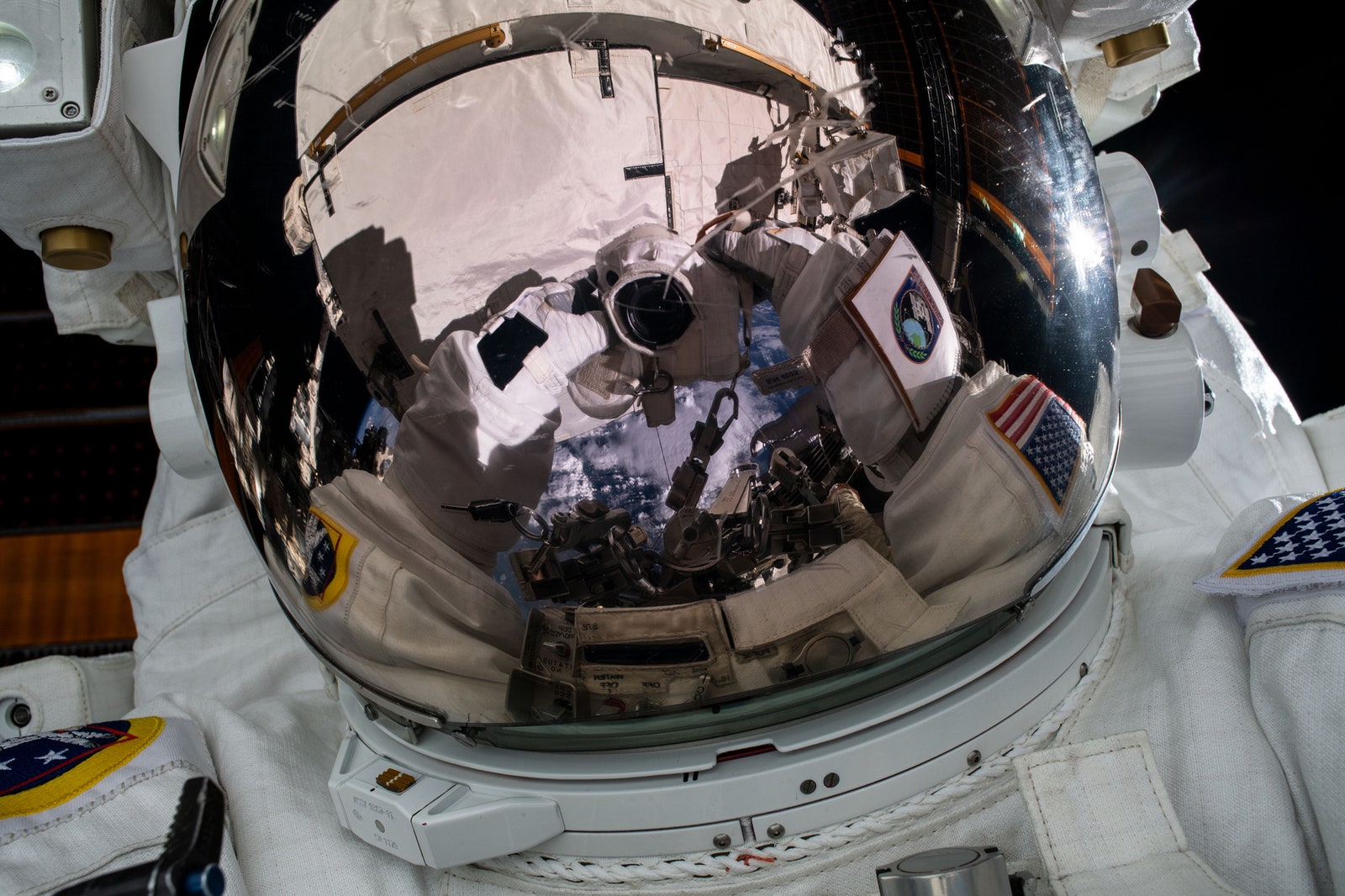 Weir takes an out of this world selfie (photo bombed by the Earth, way down below!) during a spacewalk on January 15.Photograph: NASA

Float over here to look at more space photos.