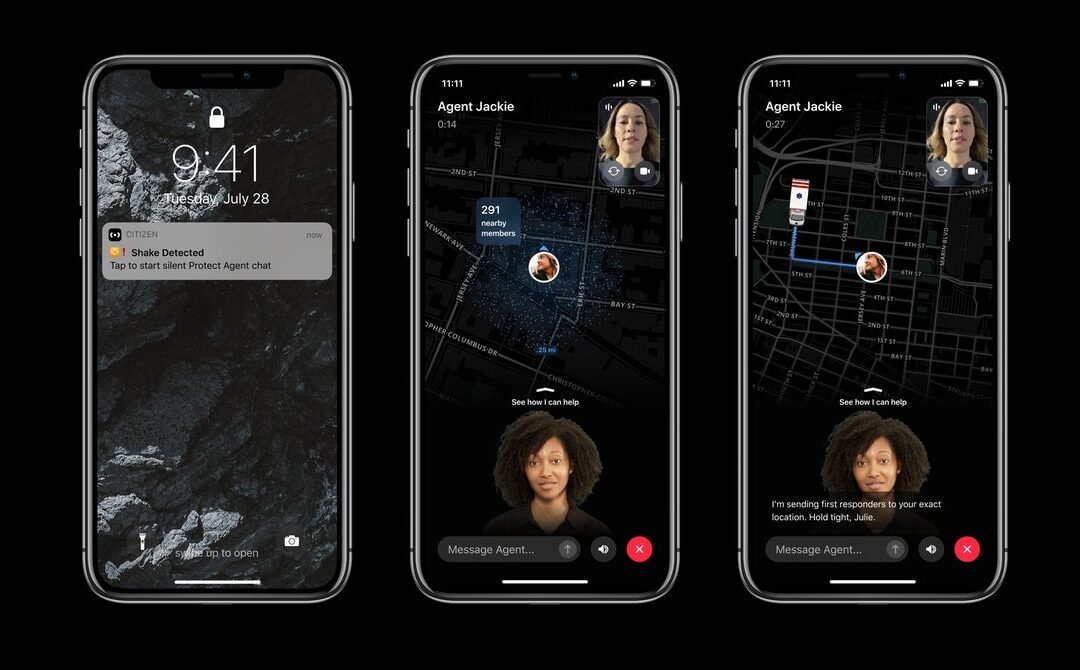 Citizen, the app that tracks local crime and lets users film incidents as they happen, has launched a new subscription service. It’s called Protect, and it enables subscribers who pay the $20 monthly fee to contact Citizen’s team of virtual security agents for help whenever they feel threatened.

Tuesday’s update marks a significant change in Citizen’s business, which until now has involved sending smartphone alerts about nearby crimes and incidents to its users for free. With this paid service, the company is not only taking a step toward actively monitoring the safety of users who pony up the monthly fee, it is also expanding a service that privacy advocates have repeatedly decried as overreaching.

Protect works like a Life Alert button for your phone. If you’re in danger, the pitch goes, just touch the red Get Agent button inside the Citizen app and you’ll be connected to a video or text chat with a Protect agent. If you need assistance on the scene, the agent can call the police or other emergency services and guide them to your location. If you have emergency contacts who also have the Citizen app installed, an agent can contact those people in the event you’re incapacitated or just otherwise too busy dealing with your emergency to reach out yourself.

The feature has been available only to select beta testers since early 2021, and today it rolls out in an app update so any Citizen user can sign up.

The new version of the app can even listen for your screams. A feature available to subscribers called Distress Detection uses an algorithm to monitor your mobile handset’s microphone for sounds that “indicate trouble,” according to the company—Citizen cites a human scream as an example. The Distress Detection feature is available only on iOS, though Citizen says it plans to expand the feature to more devices.

“We really are just on this journey to evolve the public safety system and use technology to supercharge it,” says Citizen CEO Andrew Frame.

Citizen says that somewhere around 100,000 users have tried the service in beta. Last week, Citizen provided me with a free trial of the Protect service. In my week of testing, it worked as promised. Pressing the Get Agent button on the bottom of the home screen presented me with options to contact a Protect agent through either a video chat or text chat. In one of my tests, I connected with a Protect agent identified as Agent Aaron, who told me they could see my device’s location, battery level, and rate of travel—zero, since I was sitting still. The agent also said that if I had synced Protect with an Apple Watch, they would be able to see my heart rate. That extra layer of data would presumably let them know if I was panicking or physically exerting myself. (Citizen says it isn’t commenting on any health-sensor-related features at this time.)

On iOS, a setting called Protect Mode opens up access to the phone’s microphone to allow for the aforementioned scream alerts. It also unlocks a gesture option that lets you shake the phone to text an agent. They both worked when I tested them, though it took a few screams to get the app to send an alert. In practice, Citizen agents can then loop in emergency responders and notify them of your phone’s location. In the event of an official response, Citizen will also create a public alert for the incident that will notify nearby Citizen users.

Help on the Way

Protect is Citizen’s first subscription-based offering, and a paid product of any sort is long overdue. The company has hoovered up venture capital funding since it began in 2016, while only hinting at its plans for eventually building a profitable business. In early 2020, Frame said that Citizen planned to monetize that year. (“The VCs said that they won’t continue funding this until you figure that out,” Frame told me last year.) The pandemic may have destabilized that timeline a bit, but the company’s lack of profitability doesn’t seem to have fazed investors. Citizen raised $50 million this year alone in a Series C round.

Now, after a few months of beta testing, Protect is available to all of Citizen’s 8 million users. But it’s unclear whether customers will embrace a paid service offered by one of the most contentious tech companies.