Climate Stress Was Getting Me Down, So I Made a Clicker Game 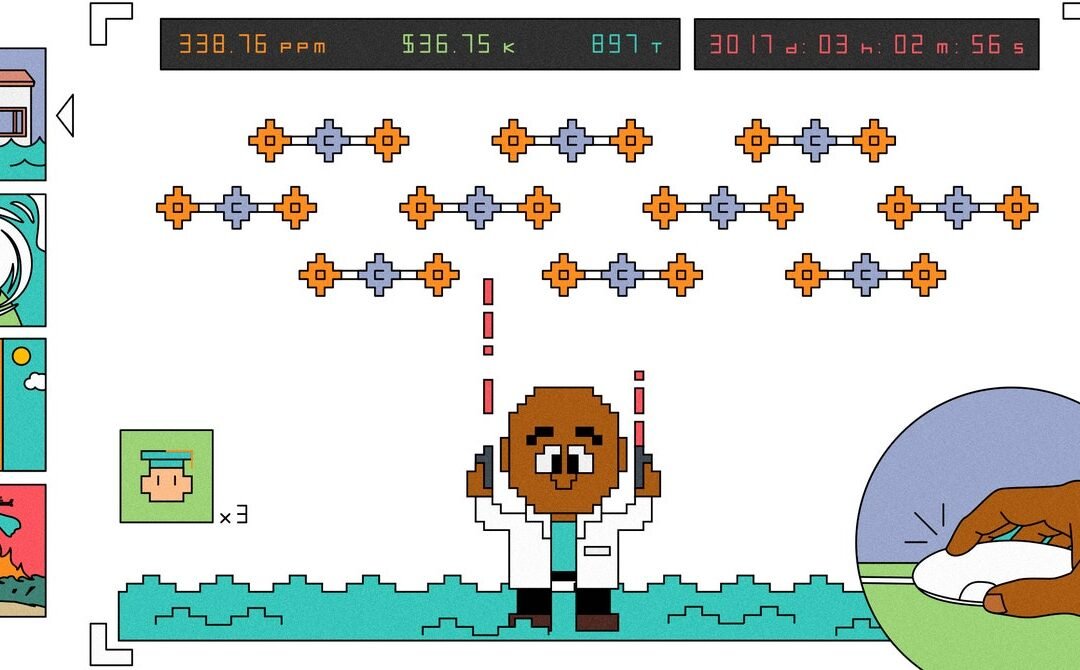 On cue, a flood came. We had prepared with long plastic gutter extenders that snaked away from the house, but water seeped into the basement anyway. I have a small piece of Wi-Fi-connected wall art that shows in colored LEDs where all the trains are in New York City. We watched as line after line went dark. Then we spent a long night rescuing storage boxes and bailing puddles with a takeout container. When the water wasn’t burbling in, we checked Twitter, where you could see the storm in parallel—subway waterfalls, sink geysers, hallway creeks. There was a picture of someone trying to deliver food on a bike in waist-deep water. It all felt very cyberpunk: plastic tendrils coming off the house, social media threading the crisis in real time, gig workers directed into peril by the apps that control their lives, streets turned to liquid. But of course the sun came up.

We wandered around, groggy. Our next-door neighbor said he’d been here 20 years and had never seen this before, which made it a once-in-two-decades kind of event. No one had a sump pump. My shrink, who used to own a house a block away, said he could remember a big flood in the neighborhood maybe 30 or 35 years ago. Could have been longer. So: a three-times-a-century event. (Of course probability doesn’t work like that; I was just trying to figure out how weird things might be getting.)

My shrink makes me repeat, many times a day: I will remain calm no matter what. And No matter what happens, I can handle it. And I will broaden my expectations. That’s his whole thing. Stuff happens, remain calm, handle it. I started seeing him because I was yelling at my kids about stupid stuff (I’ve stopped, mostly), but it’s not a bad approach for floods, either. We did stay calm under (hydrostatic) pressure. Another flood will surely come, though, which means it’s time to broaden our expectations.

My wife and I accomplish this through shared spreadsheets. There’s a lot to do—for example, I threw away the basement couch when it sprouted mushrooms—but most of the work reduces to the universal unit of home care: the Guy. Gutter guy, floor guy, roof guy, and plumber (there the “guy” is silent). They assume I’m also a guy, but it’s my wife who works in construction, so I hide upstairs when they arrive. Later she comes up and draws diagrams on an epaper tablet to explain what’s going to happen. I nod and say simple words as questions, like “Pipes?” or “Sewer?” That is our love language.

The spreadsheets are fine for dealing with our basement, but I don’t think they’ll scale to every basement on Earth. And because, like so many people, I’m obsessing over climate change, I’ve been looking for software tools that will help all of us plan. A friend recommended Temperate, which seems fine—let’s call it a “climate mitigation wizard” for communities, to make sure you’ve thought about flooding, hurricanes, heat waves, and wildfires. I messed around with the free trial, but I’m not a community. Then I read through toolkit.climate.gov. The problem there is that the government offers around 500 “tools”—some websites, some PDFs—ranging from shareable sunscreen memes to calculators that tell you the pathogen risk at your local beach. It’s like browsing the pamphlets in a health clinic. I did find some helpful checklists, but I am not a coastal wetland (yet), so they weren’t as useful as they could have been.