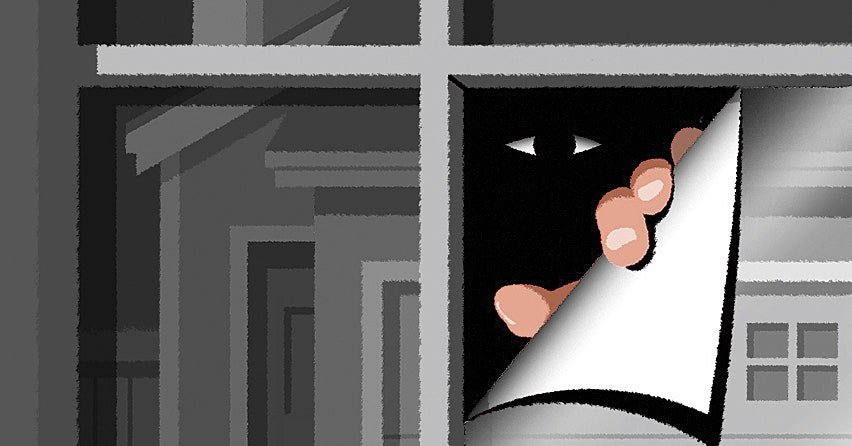 I haven’t been burglarized or anything, but I’m feeling some pressure to get one of those Ring surveillance systems for my front porch—the ones that record 24/7 video. Seems smart, but friends are telling me it’s a bad look. Would it be unneighborly of me? Am I just an untrusting, untrustworthy gentrifier?

I’m trying to figure out why, exactly, you believe a Ring would be a bad look—not because I doubt it, but because there are so many possible reasons to choose from. There is the fact that the systems, whose signature blue halos blink across America’s residential neighborhoods like the all-seeing eyes of Argus, form what is essentially a massive for-profit surveillance network, one that law enforcement agencies can access without a warrant or probable cause. There is the fact that the technology contributes to arrests for petty crimes in an era when we’re well aware that encounters with the police can be fatal. There is the very real possibility, given patents Amazon has registered, that the cameras will soon use biometric sensors to identify people by their skin texture, gait, and smell (this from a corporation whose facial recognition software is notorious for misidentifying non-white faces). Then there is the Ring-adjacent social app for reporting “suspicious” people, which Amazon chose to christen, in a spirit that was either laughably ingenuous or brashly Orwellian, “Neighbors.”

But it seems to me that your question gets at a more fundamental dilemma, that you’re asking not merely whether you should buy one of these systems but, more broadly, what it means to be a good neighbor in the age of mass surveillance, gentrification, and police violence. Considering the popularity of community Facebook pages and social platforms like Nextdoor, which putatively connect people with their communities but too often serve as crime-reporting tools and forums for all sorts of conjecture about “suspicious persons,” one might assume that a good neighbor is a kind of detective, a citizen who is willing to sniff out interlopers, collect evidence, and work in conjunction with law enforcement to keep the neighborhood safe.

Many faith traditions teach that we should love our neighbors—that we should love them just as we love ourselves. In the US, this tenet has long lived in tension with the virtues of individualism and the sanctity of private property, and has often prompted that tepid “good fences” wisdom that Benjamin Franklin famously prescribed (“Love thy neighbor, yet don’t pull down your hedge”). Loving one’s neighbor, it would seem, is an act best practiced within the constraints of the law, which draws perimeters, enforces boundaries, and makes clear distinctions between what belongs to you and what belongs to others. If you find this logic reasonable, you are in good company. It’s become something of a no-brainer in popular culture that self-preservation is the foundation of any viable altruism; you cannot properly care for others until your own needs are met. Some might argue, even, that the religious dictum endorses the effort to fortify one’s house. Loving your neighbor “as yourself,” after all, implies that there is also virtue in self-love, so you could make the case that protecting your property and your own safety falls under that command’s umbrella.

I will point out, however, that this is not the only way to interpret the spiritual maxim. For quite a different perspective, you might look to Kierkegaard’s “Works of Love,” one of the most uncompromising meditations on the injunction to love one’s neighbor. The existentialist philosopher argued that the commandment offers a far more radical proposition, one that requires us to surrender our commitment to justice, fairness, and private property. Just as major crises—revolutions, wars, earthquakes—erase the line between “thine” and “mine,” forcing people to relinquish their material belongings and attend to the more immediate needs of their communities, true love for one’s neighbor is a fundamentally disruptive practice that rules out petty questions of ownership. Thieves also disregard the distinction between mine and thine, Kierkegaard points out, and love is the inverse of theft, a willingness to cheerfully surrender what belongs to you for the sake of your brother. This advice might seem impossibly lofty, or even absurd, though as far as I can tell, Kierkegaard meant it to be taken literally, drawing as he did on the radical Christian ethic that insists if someone steals your coat, you should give them your shirt as well—or, to update the analogy: If a porch pirate swipes your Amazon package, throw in your FedEx parcel to boot.

To truly love in this way, Kierkegaard argues, it’s necessary to abandon the role of a criminal detective, those “servants of justice who track down guilt and crime.” This is the impulse, inherent in each of us, to investigate the behavior of others, to unearth their sins, to ferret out clues of potential wrongdoing. Instead, the person who truly loves their neighbor must assume the best. The investigative mindset might even become a force for good if it’s turned in a more positive direction, toward finding charitable explanations for others’ behavior and interpreting it in the best possible light. Perhaps the stranger wandering the halls of your building is house-sitting for one of your neighbors. Perhaps the unfamiliar person approaching your porch is simply returning a misdelivered piece of mail. If no explanation is possible, Kierkegaard advises, we must simply forgive the person. In the end, he offers a firm warning to citizens drawn to the enthralling drama of the digital neighborhood watch: It is the job of public officials to track down crime and wrongdoing. “The rest of us are neither called on to be the judge nor the officer of justice, but, on the contrary, we are called … to love, hence by the help of the extenuating explanation, to cover the multitude of sins.”

Perhaps this is already apparent, but Kierkegaard would not have bought into the contemporary self-care motto that well-being, like airplane oxygen masks, is a safeguard that you must secure for yourself before attending to others. In fact, he argued that the command to love one’s neighbor “as oneself” does not entail a moral symmetry but rather relies on a “heightened inequality,” as it demands that we spare ourselves the leniency that we must extend to others. It may be virtuous to respond to another’s limitations with generosity, but we should not apply this same optimistic outlook toward ourselves. We should not presuppose that we are our best selves, that our motives are entirely pure. Instead, one should practice a vigilant self-doubt and “treat oneself as a suspicious character,” as he puts it. It is with one’s own conscience, in other words, that the procedure of a criminal detective becomes virtuous.

With that in mind, I’d encourage you to turn inward, training your moral surveillance not on the peculiar actions of those around you but upon the murky recesses of your own heart. Does your anxiety about intrusion belie your suspicion that you are yourself an interloper in this community? Does your fear about being seen as the enemy reveal that you’ve come to regard your neighbors that way? Your concern that you are “an untrusting, untrustworthy gentrifier” suggests that you already understand the recursive logic that undergirds many religious ethics: that we take on precisely those vices we most fear in others. Those who are untrusting tend to be untrustworthy; those who are fearful should rightly be feared. Morality is not a digital peephole that allows you to scrutinize others while you yourself remain protected and unseen. The ripples created by our actions flow in both directions.

This article appears in the March 2022 issue. Subscribe now.