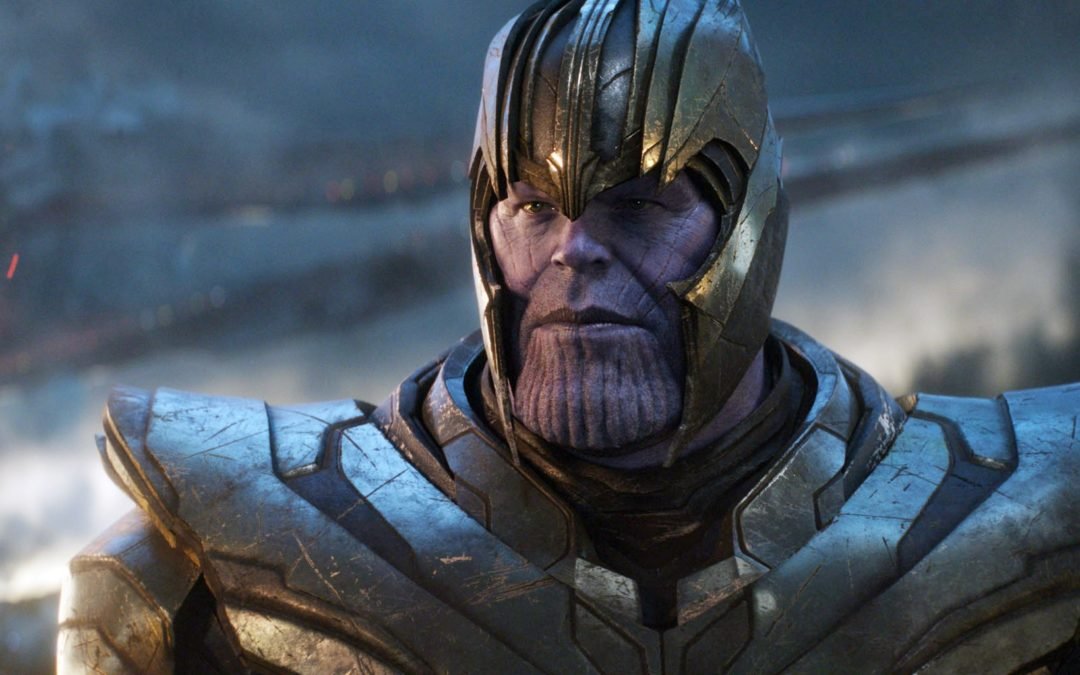 I’ve waited, and now it is time. With the official digital release of Avengers: Endgame I can now analyze some scenes. Yes, I like to wait this long to give everyone a chance to see it first.

In this epic scene, Captain America picks up Mjölnir (Thor’s hammer) and uses it to smack Thanos. Honestly, it’s one of the great parts of Endgame. But what can I calculate from this? Well, using video analysis I can plot the motion of both Cap and Thanos. From that, I can see if momentum is conserved. I’m sure it’s not—so I will then estimate the external forces on Mjölnir that would produce this result.

What the heck is momentum? This is the product of an object’s mass and velocity and typically represented by the variable p (in units of kilogram*meters per second). Momentum is used in the momentum principle. As an equation, it looks like this.

This says that a net force on an object changes its momentum. That’s what forces do—and yes, both force and momentum are vectors. Don’t worry about the vector stuff for now though.

Let’s consider two objects (like Captain America hitting Thanos). Since forces are an interaction between two objects, the force that Cap exerts on Thanos is the same (but opposite direction) as the force with which Thanos pushes back on Captain America. It’s just the way forces work.

If this interaction force is the only force acting on our two humanoids for the same amount of time, Captain America’s change in momentum will be exactly opposite that of Thanos. It doesn’t even matter what their masses are—this will still work. If you consider the total momentum of both Thanos plus Captain America, the total momentum must be constant. In physics, this is called “conservation of momentum.” Of course this only works if the ONLY force is the interaction between the two humanoids. If Mjölnir exerts an external force or Thanos is pushing on the ground, then momentum would NOT be conserved.

Great. Let’s get some data. I can use video analysis (using Tracker Video Analysis) to get the position of Captain America and Thanos in each of the frames. I will make the following assumptions.

Let’s start with the vertical motion for both Thanos and Captain America.

You can see that after the hit from Captain America, Thanos seems to move with a constant vertical acceleration. This would give him a parabolic trajectory (for the position-time plot). I’ll skip all the math details (they are here if you want to see them), but with this data, I can find the vertical acceleration of Thanos with a value of -6.86 m/s2. That’s a little bit lower than the acceleration on Earth. If I speed up the frame rate (after the hit) by a factor of 1.22, I get a much better acceleration.

Oh, but check out that graph above. Do you notice anything odd? Yup. It’s Captain America. His vertical position after knocking the crap out of Thanos is just stationary. He’s mostly just floating. Oh sure, maybe he’s getting a lift from Mjölnir—or maybe he’s just spending a little extra time holding that epic hero pose.

Let’s get back to the momentum. I want to look at the horizontal momentum both before and after the hit. But there is a small problem—the mass. I can roughly estimate the mass of Captain America with a value of 120 kilograms (265 pounds) with Mjölnir and the shield. But what about Thanos? That’s pretty tough. From the video, I can measure the height of Thanos at about 2.7 meters (8.86 feet). This is about 1.5 times the height of a human (with a mass of 70 kg—for an average). If you increase his size by the same factor in all three dimensions (so that he still looks humanoid), his volume would increase by a factor of 3.375 (that’s 1.5 cubed). Assuming he has the same density as a human, this puts his mass at 236 kilograms (520 pounds). True, there is no reason to assume the density of Thanos is the same as that of a human. So you could reasonably put his mass anywhere from 200-260 kg (or really any value). I’m going with 236 kg.

Finally, I’m ready to look at the horizontal velocity both before and after the collision. Here is a plot (with adjusted time scale).

Check that out. From the slopes of the position-time plots, I can get the horizontal velocities. Here are the values.

Now for the momentum calculations. Here, I put them in a short bit of python code (so you can change the values). Just click the “pencil” to edit the code.

Here you can see a problem. The momentum before the collision is not the same as the momentum after the collision. But wait! I can fix this. What if we consider the system of Thanos plus Captain America? This system does not have a constant momentum; rather, it increases in the positive x-direction (to the right in the scene). Why does the momentum of the system change? The only physics reason would be an external force. Suppose this external force comes from Mjölnir—I’m not sure how, but let’s say it does. Maybe Mjölnir gets an external force from another dimension or something. In this case, I can use the calculated change in momentum with the time of impact (I’m going to use two video frames) to calculate this force. As you can see in the calculation above, that puts the Mjölnir force at 4910 Newtons (1,100 pounds). Actually, it could be much higher with a shorter time interval (which I just guessed).

Oh, you don’t like that answer? Fine. Here are some homework questions then.