FitXR Is Gonna Make You Sweat (in the Metaverse) 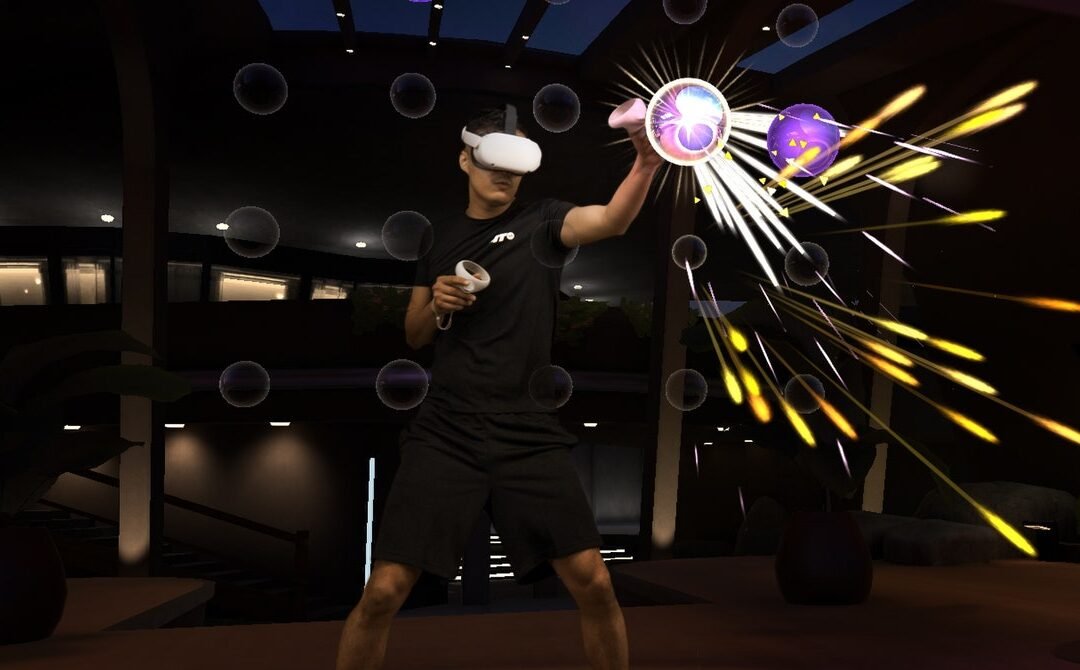 Even if you don’t have any online friends working out with you, the classes pair you up with six virtual players to give each class a group feel. A leaderboard displays how well you’re doing during the workout compared to your (real or virtual) competition. It shows the time left in the workout and your score, current streak, best streak, and your current level. Points are scored based on how accurate your strikes and movements are as the workout progresses.

One of the best indicators of when to move is the beat of the music. FitXR has an excellent soundtrack with lively and energetic beats in every workout, and the songs’ beats act as auditory cues for when you should move, duck, or punch. It took me some time to figure out during my first few boxing sessions, but once I got dialed into the rhythm, my scores, streaks, and stoke level went through the roof.

Playing on the Quest 2 was a great re-introduction to the VR world. The workouts take place in a variety of settings, from rooftops to cliffs or a traditional fitness studio, and the music, graphics, and tactile cues are the closest thing to the X-Men’s Danger Room that I’ll ever experience.

The resulting experience is a workout that is so fun you won’t realize you’re getting a workout until it’s over. Often, I’d crank away in a boxing workout, shooting for a high score, then take off my headset afterward and realize that I was breathing hard and dripping sweat. During multiplayer sessions, you and your workout buddies can talk smack, yell at each other, and shout encouragement. Or, if you’re petty like me, you can try to distract the leader or goad them into missing a few reps so you can attempt to pass them on the leaderboard.

Having a fitness studio in a headset is also great for frequent travelers. Plugging into a virtual world and swinging away at an armada of glowing neon blobs to a killer soundtrack beats the hell out of plugging away in a sad hotel fitness closet. I’ve taken the Quest 2 headset and its hand controllers on several trips specifically to squeeze in a quick FitXR workout while on the road. It’s a lot easier (and more fun) to bust out a quick workout in your boxers in the privacy of your hotel room before you hop in the shower and head out the door. Just make sure you don’t get too excited and end up punching the TV in your hotel room. Not saying it happened, not saying it didn’t.

The tie-in with Oculus enables a neat perk. You gain the ability to beam whatever the user sees to a second screen so other people can watch the action. My wife and I have taken turns doing workouts while the other one watches and shouts encouragement (or laughs at a missed target).

The most significant barrier to using FitXr is that you need to own a Quest headset to use it, but to be fair, the Quest 2 is a hell of a lot cheaper than a lot of home fitness systems. Also, at least for now, you’re still going to need a Facebook account to log in. If you’re one of those anti-social media types, you’ll have to create a dummy account and hope you don’t get sucked into the Meta vortex.

Things do get a bit steamy inside the headset, but that’s something else that could change with Meta’s push into the world of VR—the company recently announced Active Pack for Quest 2, a set of controller grips and a face cushion that are made to get sweaty. That’s due soon.