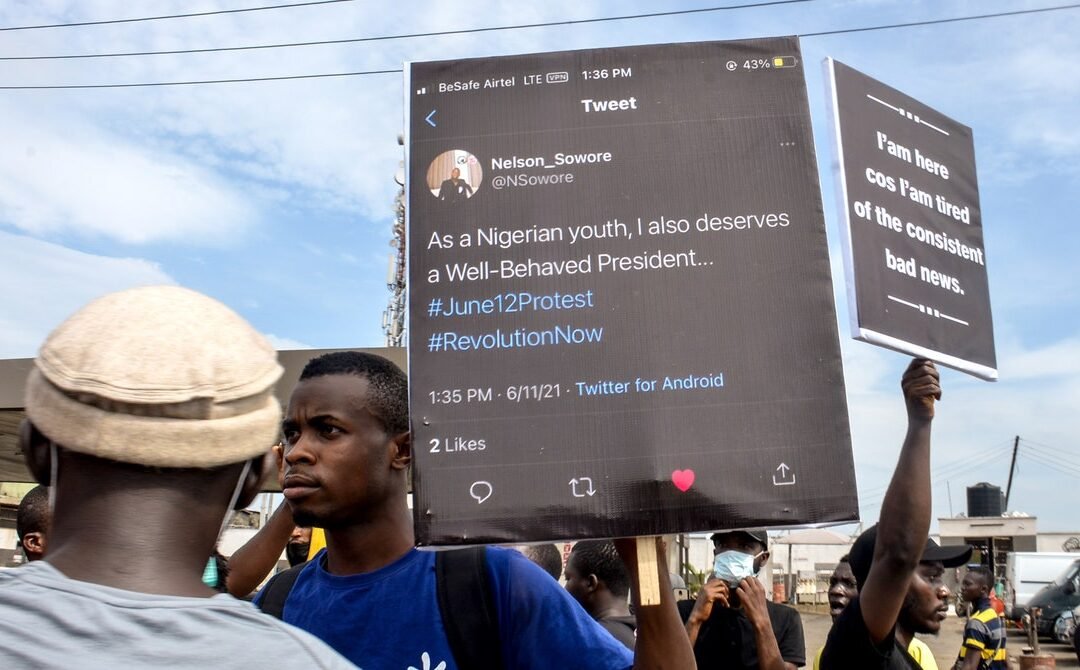 Earlier this month, Twitter took down a tweet from Nigerian president Muhammadu Buhari that threatened to punish regional secessionists, violating the platform’s rules. Two days later, the Nigerian government retaliated by suspending Twitter, which it ironically announced on Twitter. Months earlier, the Ugandan government shut down its country’s internet after a fight with Facebook and Twitter in which several accounts linked to the ruling party were suspended for “coordinated inauthentic behavior.”

The wrestling match between African governments and Big Tech platforms has been painful. While platforms are finally enforcing their content policies, these long overdue actions have led to outcomes worse than no content moderation at all: citizens having their access cut off.

Odanga Madung is a journalist and the cofounder of Odipo Dev in Kenya. He is currently a fellow at the Mozilla Foundation, where he explores the intersection of civic freedoms and technology.

Human rights lawyers and activists in both Nigeria and Uganda insist that these bans were unconstitutional violations of free speech. In Uganda, however, a constitutional court recently dismissed a case challenging the internet shutdown during the country’s elections. The court determined the ban was done in “good faith and secured the country against the risk of incitement and violence,” setting a dangerous precedent. Authoritarian overreach is redefining itself, and as more territories seek to quash dissent from the Congo to Ethiopia, tech companies will often find their human rights and content moderation principles in direct opposition to their profit motives.

Nigerians are also challenging their government’s decision in court, on the grounds that suspending Twitter is an attempt to silence criticism. The country is slipping back into a dictatorship under Buhari, who previously took power in a military coup in the 1980s. Nigeria’s youth see Twitter as the most active opposition to oppression. As we saw last year with the #ENDSARS protests, the platform has amplified their voices, providing avenues to hold the government to account after the police blatantly shot at peaceful protesters in the Lekki massacre. Nigeria’s thriving tech ecosystem, with the most startups in Africa, is also asking itself what the future holds as this ban sends a threatening signal to investors. Many local businesses that sell their wares through Twitter have also been affected.

The Nigerian government says that the suspension of Twitter had nothing to do with the deletion of Buhari’s tweet; rather, they say, it was in order to muzzle a separatist leader who it claimed “issues directives” via the platform. Whatever the real reason, the fact remains that a platform is again on the losing end after standing up to authoritarians. Counteractions taken by the governments of Poland, Vietnam, and Pakistan have followed a similar template, and are being called “hostage taking laws.” The playbook goes like this: Suspend a social media platform, then require the platform to set up an office or hire representatives in the country, primarily to receive government orders, and make them store data locally. Nigeria has already taken the first step by requiring all social networking sites to register locally in order to operate in the country. In effect, platforms are forced to put their own workforce in danger—as we’ve seen in India, where Twitter’s offices have been raided multiple times, and Brazil, where a Facebook vice president was arrested.

Since the 2016 US elections, a large part of the “techlash” has focused on pushing platforms to create systems for removing harmful content. The content moderation boom is now showing cracks. The difficulty of moderating the ocean of content that gets posted by billions everyday was obvious well before Covid-19 and election misinformation emerged. The political challenge now, however, is formidable, and the long-term survival of platforms, or the open internet as we know it, is unknown. More content moderation might not be the best solution. While it’s commendable that Twitter has the spine to stand up to authoritarian governments, the company faces steep tradeoffs. Deleting content doesn’t delete the content’s root cause.

As platforms confront politics in African countries via their fact-checking and moderation programs, battle lines will be drawn. Beyond issuing weak statements, Western governments have barely responded; no hard sanctions have come the way of the offending countries. Twitter will be largely left to fend for itself in its spat with the Nigerian government, and the Nigerian government will win. Sadly, Twitter will never be able to replace or compensate for failing institutions.