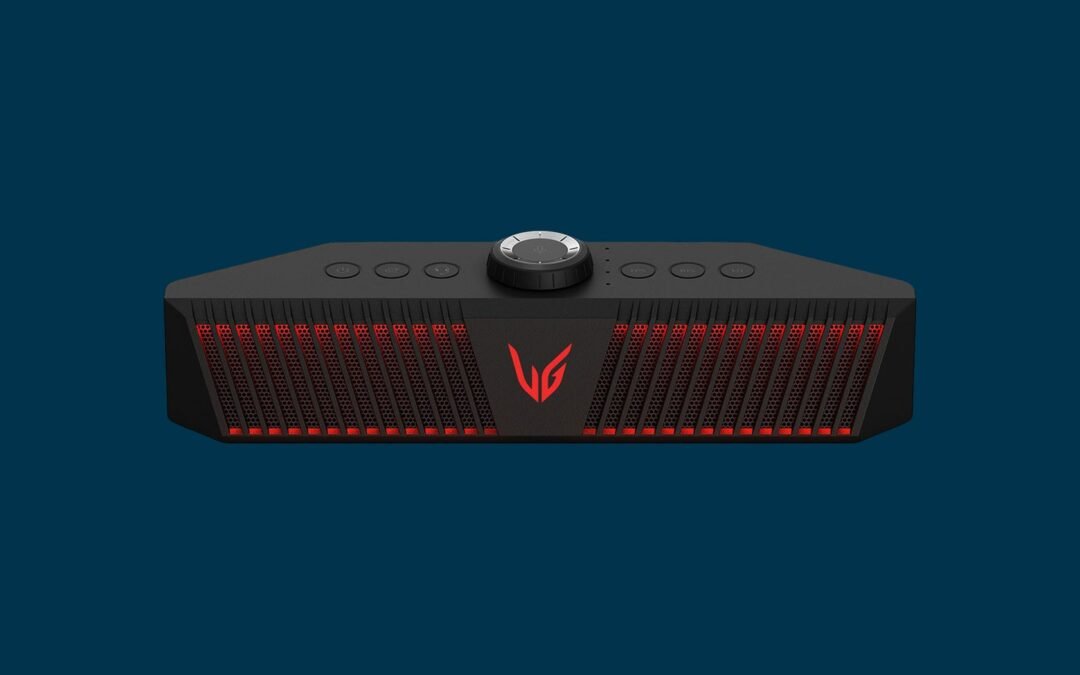 Soundbars are generally something you’d associate with a home theater. They offer most of the benefits of an elaborate sound system, but in a much more convenient package. It’s a concept that seems like it would lend itself well to a desktop gaming rig, but few companies have even tried. LG’s attempt is the most ambitious yet, but if this is an indication of where the market’s at, there’s a long way to go.

LG’s UltraGear GP9 is a 20-watt mini soundbar, just under 15 inches across. It packs two 20-mm tweeters and two 2-inch woofers. It also includes a 2,600-mAh battery, allowing it to act as a portable Bluetooth speaker. Most notably, it includes a built-in microphone for chatting with teammates in-game, which might be the most shockingly well-implemented feature present here.

Everything but the Kitchen Sink

On paper, the LG UltraGear GP9 seems like the perfect soundbar. It can plug into your computer via either USB-C or an optical audio cable, and switching inputs is as easy as pressing a button on the top. Right next to those buttons, you’ll find a giant volume knob that controls the speaker’s internal volume, with a large mute button in the middle. That means even if you can’t find which app is making noise, you can turn the sound down real quick.

This is especially useful when the GP9 is being used as a Bluetooth speaker, one of its neatest tricks. Since it has a built-in battery, it can be unplugged from the wall. It’s powerfully freeing to know that the sound system I’m using for my desktop could just as easily go with me to the beach or, more likely if I’m being honest, downstairs for board game night. I’d usually need an entirely separate device, and that’s a huge factor when considering the price. Sure, $500 would be a lot for desktop speakers, but what about desktop speakers and a portable Bluetooth speaker? Okay, that’s still a lot. But the value is getting closer to reasonable.

On top of that, the GP9 pulls another trick out of its hat: It can also be used for team chat. How in the world can it manage that, you ask? Pure magic is my best guess. The microphones are inside the same soundbar that’s blasting audio at your face. That’s normally a recipe for feedback, echoes, and noise. Yet the intelligent echo and noise cancellation is able to distinguish your voice from the audio that the soundbar itself is putting out.

I tried it out and was told by teammates that I sounded clear, with no major audio problems, which feels like nothing short of a miracle. Being able to chat with your team while listening to game audio, all without a single piece of hardware on your head, is the kind of futuristic feature that would normally sell a device all on its own.

But unfortunately, it’s at this point that the reality of the UltraGear GP9’s performance comes crashing back to earth. As many great ideas as this little soundbar packs into a single package, it has one job to do over all others. That’s where the problems started.

Competing With the Past

Close to two decades ago, I walked into a Micro Center and dropped just shy of $100 on a 5.1 surround sound Logitech desktop speaker system. It wasn’t the highest-end option, even at the time, but it came with five speakers with some really, really long RCA cables and a reasonably hefty bass that everything plugs into. I’ve long since given up on using the rear speakers, and I have made no attempt to update or even marginally improve this system since I first bought it.