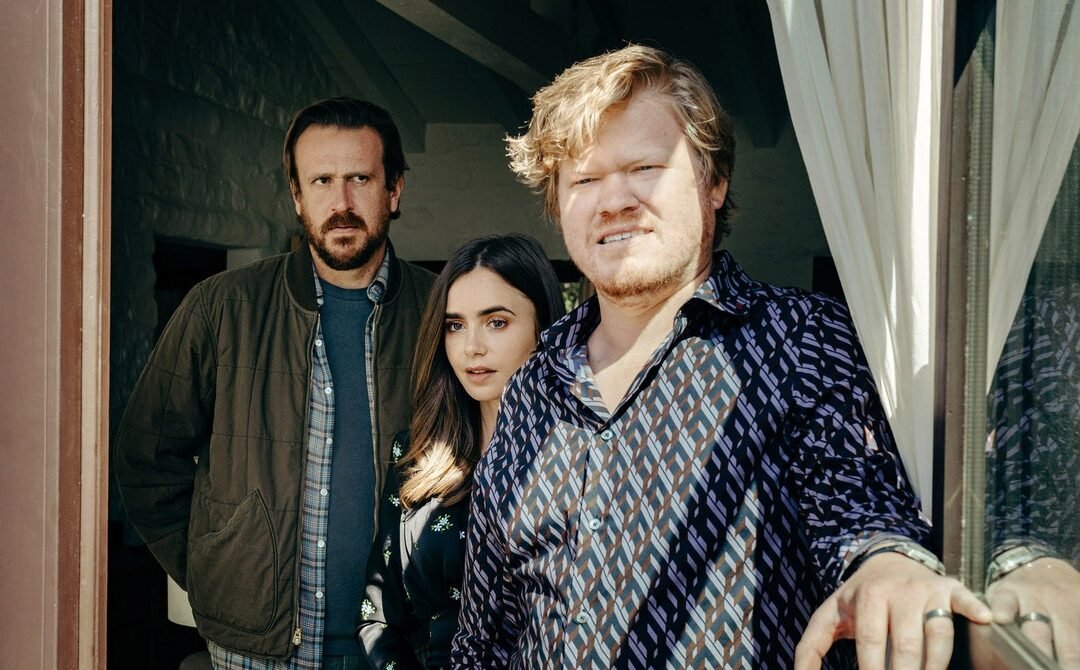 Ever notice how the houses of the ultra-wealthy look like nobody lives in them? There’s an eerie quality, the opposite of hominess. Netflix’s new movie Windfall opens with a long, lingering shot of a mansion’s poolside patio furniture, straight out of an Architectural Digest spread. Birds chirp, flowers bloom, the outdoor coffee table is a solid slab of concrete. It all screams expensive. In a long, wordless scene, we follow a nameless man (Jason Segel, credited as “Nobody”) as he wanders around this gorgeous property, sipping iced coffee by the pool and eventually walking into the empty home. Its rooms are as posh as the grounds, with Spanish tile, pristine plaster walls, and abstract pottery everywhere. The man almost leaves, then doesn’t. Instead, he returns to the house and starts looting. He fastens a Rolex around his wrist, collects jewelry, stuffs all the cash he can find into the pockets of his ratty pants. This is a burglary, albeit a laconic one. The thief is on his way out when the owners show up for a last-minute romantic getaway. They catch him before he manages to sneak out. And although this man is a total amateur, he piles crime on top of crime, taking the well-heeled couple hostage.

The owners, a tech billionaire (Jesse Plemons) and his chic wife (Lily Collins), attempt to reason with the burglar, offering him whatever he can grab. They almost succeed in getting him to leave. But when “Nobody” suspects he’s been caught on tape, he asks for enough money to start a new life, so the trio must wait around for a half a million in cash to be delivered the next day. As they watch the clock, the burglar and his captives stroll around the pretty, sun-dappled grounds, meandering through its expansive orange grove, sitting around a fancy fire pit, snippily making conversation. The billionaire can’t believe what an oaf his captor is and finds any excuse to needle him. We learn that the origin of the billionaire’s fortune is an algorithm for layoffs and that he doesn’t feel bad about having created it; he wastes little time asking the thief if he was one of the unlucky who lost their jobs because of his work. And the burglar is an oaf; he struggles to unclasp the wife’s purse, can’t keep his boots tied, and has tantrums every time something doesn’t go his way, which is frequently. Meanwhile, as the wife plays peacemaker between the two men, she starts to stew on the state of her marriage.

Director Charlie McDowell excels in putting unhappy couples through their paces during would-be secluded retreats. In his 2014 film The One I Love, another husband and wife encounter unexpected strangers at a dreamy vacation home while attempting to revive their relationship. But whereas The One I Love had a science-fiction twist, Windfall is propelled by a real-life crisis: the gaping chasm between the incredibly rich and the rest of us, and the impossibility of bridging it unscathed. Despite its gleaming setting, Windfall strikes the tone of a noir, its story suffused with a cynicism as sweeping as the vistas its mansion overlooks.

Watching Segel’s burglar bumble his way into increasingly grim circumstances, I was reminded of The Edukators, the 2004 German-Austrian crime drama about a trio of young radicals who decide to teach the wealthy a lesson by breaking into their homes just to unsettle them. But while The Edukators has sympathy for its underclass, Windfall is pitiless. It would’ve been easy for this film to slide into a morality play—poor schlub robs rich assholes, hurrah!—but it’s no triumph of the proles. If anything, it’s a testimony to the amorality of the universe, a Fargo with no Marge Gunderson in sight. Segel’s burglar isn’t a modern Robin Hood; he’s just a doofus who summoned up enough courage to commit a robbery and enough foolishness to get greedy and ask for more. Although its characters are presented as archetypes, there is no hero here.

For the first hour, Windfall plays like a dark comedy. The burglar’s ineptitude fuels some funny moments, like when he’s demanding more money and asks for $150,000 in cash. The wealthy people he’s extorting tell him he’ll need more than that if he’s trying to create a whole new identity. Nobody in the trio seems violent, and they’re all more annoyed than scared. Collins’ wife isn’t an innocent ensnared so much as a person slowly realizing that the terms of her deal with the devil weren’t really so favorable. Plemons’ billionaire, cocky and contemptuous, is technically a victim yet so viscerally unpleasant that it is hard to muster sympathy when he gets tied up and looted.

But hostage situations rarely end with everyone going off on their merry ways unscathed. I won’t say more about what unfolds, except that there is a scene about 70 minutes in that shocked me so much I leapt off my couch. (Gore-averse, be forewarned!) Jokes aside, this is a tart, nasty little thriller. Despite its modest scale, it leaves a powerfully astringent aftertaste.