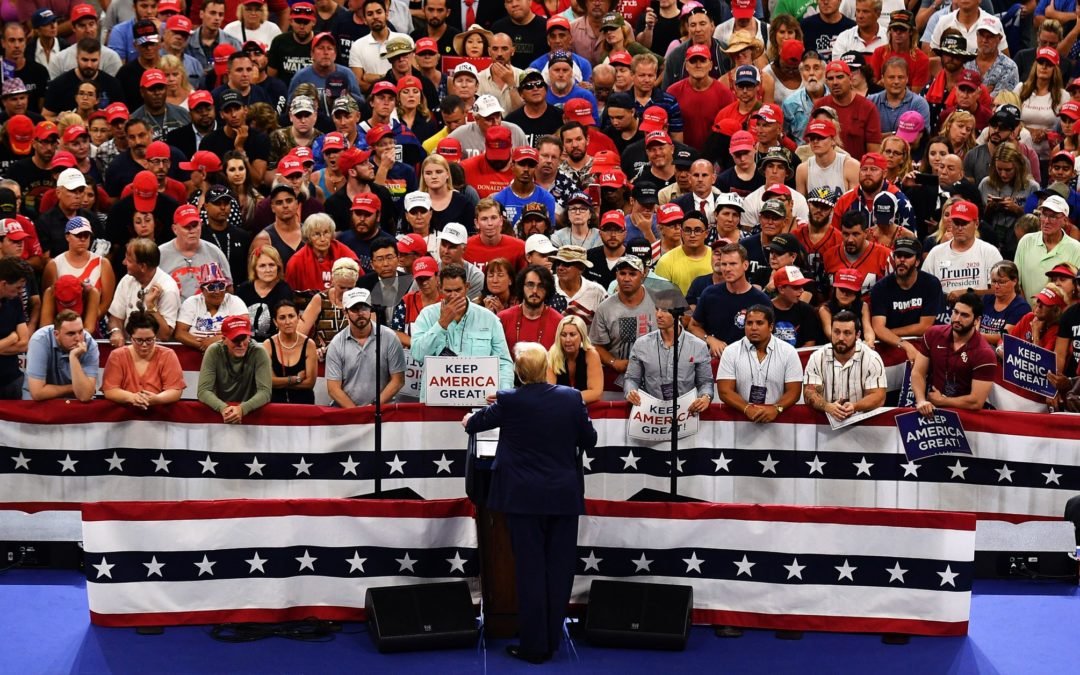 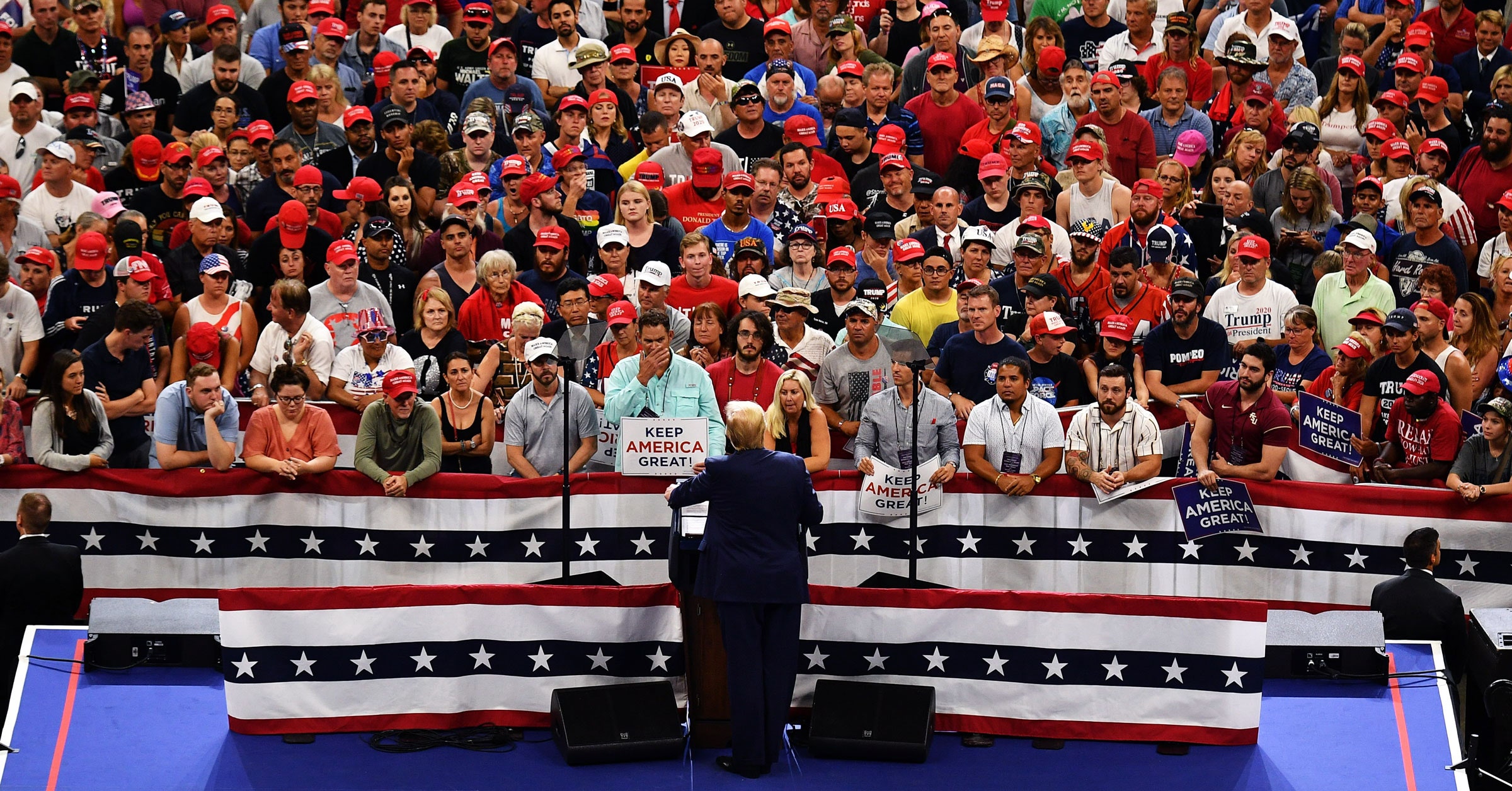 Wow. So, what all happened last week? Well, former vice president and presidential hopeful Joe Biden can’t seem to get out of his own way, and people are starting to wonder if smartphones give you horns. So there’s that. Also, Roy Moore, is inexplicably back in politics. Meanwhile, Slack went public; Radiohead’s Thom Yorke is making musicals now; the Senate surprisingly voted to block President Trump’s attempts to sell arms to Saudi Arabia; the US team is still dominating the Women’s World Cup; and the NBA Draft happened. Really, it’s been quite the week. While You Were Offline is here to catch you up on the rest.

What Happened: There are detention centers inside the US for immigrants the current administration has deemed unwanted, but apparently calling them concentration camps publicly upsets a lot of people, even though experts on concentration camps stand behind the usage of the term.

What Really Happened: That the US treatment of immigrants has become increasingly inhumane over the past few years is, sadly, no surprise. On Monday, President Trump announced a new plan of mass arrests by ICE, and there are currently large detention centers of immigrants along the border, where multiple detainees have died. If that sounds like a concentration camp to you, you’re not alone; one historian, who literally wrote the book on the history of concentration camps, agrees, and her agreement is where our story starts. It was, after all, noticed by congresswoman Alexandria Ocasio-Cortez, who brought it to light on Twitter.

Given how much of a controversial figure Ocasio-Cortez is on the right, it was only a matter of time before her tweets became fodder for the outrage machine. Sure enough, despite her attempt to preempt semantic criticism, such criticism quickly appeared.

More than a few watching the back-and-forth on Twitter were aware of just how surreal the entire discussion, such as it was, had become.

Beyond surreal, there’s also something about the semantic argument that was also inhumane in itself, as others also couldn’t refrain from pointing out.

Indeed, to look past the debate over just what to call the camps, perhaps it’s more worthwhile to look at reporting about life inside the camps and consider the causes of disease inside the camps—perhaps it has something to do with the Justice Department arguing against giving soap to detainees. If nothing else, everyone should read about the youngest child separated from his family at the border.

The Takeaway: If nothing else, this debate does illustrate how particularly unfocused and broken the current level of political debate has become.

What Happened: Guess what? Donald Trump is running for president … again! If that sounds particularly familiar, just wait until you hear what he talked about at the rally to officially launch his 2020 re-election efforts.

What Really Happened: In what may have been the least unexpected development of the week, President Trump announced he wants to keep being president. Last week, he officially announced his 2020 candidacy, despite the fact that he started planning in 2017 and revealed his 2020 slogan that same year. But, sure, OK.

The announcement was made at a rally in Orlando, Florida on Tuesday evening. Let’s look at who was in attendance, shall we?

See? They’re just dancing regular Americans, nothing to be worried about!

…Oh. But should we be surprised that conspiracy theorists and Proud Boys were out in force? Inside the rally itself, meanwhile, it went, well, pretty much as anyone could have expected. Which was potentially the problem.

Indeed, reporting about the event centered on how familiar everything the president’s rhetoric had become. But should we have expected anything else from a man who seems pathologically unable to learn anything new or change direction in any meaningful way?

The Takeaway: Some were underwhelmed by the re-election reveal, which might bode ill for the future for Trump.

What Happened: Not content with being one of the most important political figures in recent memory, Senate Majority Leader Mitch McConnell made another bid for a place in history last week by arguing that there was no need for reparations for slavery because, hey, that was all a long time ago and didn’t we have a black president a year or two ago? No hard feelings, guys.

What Really Happened: That Mitch McConnell is a man shameless in his own smug ambition and selfishness is no surprise, as many have previously pointed out at any given opportunity. Nonetheless, it was still oddly bracing to see him arguing against reparations for slavery last week.

For those paying attention, yes; McConnell really is arguing that President Obama’s tenure in the White House makes up for slavery. It was certainly an option to say that.

Unsurprisingly, McConnell’s particular take on the subject was widely viewed as ahistorical and highly contrary.

McConnell’s comments came in advance of a House hearing on the subject of reparations. One of those testifying, author and journalist Ta-Nehisi Coates, easily unpacked and rebuked McConnell’s argument.

The Takeaway: Perhaps there’s something to be said for the fact that McConnell made these comments at all, even if only to illustrate who he is, and where he comes from—which is to say, the past.

What Happened: For years, former White House communications director Hope Hicks was an enigma within Trumpworld: Seemingly omnipresent, yet rarely heard from. Last week, she had to testify in front of Congress, but for those expecting her to break her silence, only disappointment—and an army of attorneys determined to help her keep quiet—awaited.

What Really Happened: As investigations into the Trump administration continue, Wednesday saw testimony from one of the more private of Trump’s confidants: former communications director (and, apparently, “the Forrest Gump of the White House,” according to one profile) Hope Hicks. The testimony was held behind closed doors, away from the media and the public, but it was clear to everyone fairly early on that it wasn’t going to be the most illuminating experience nonetheless.

Indeed, the White House claimed something called “absolute immunity” to keep Hicks from revealing anything, which came as a surprise to many, mostly because there’s no such thing.

Absent any new information—and certainly nothing worth keeping from the public—it only took a day before Hicks’ testimony came out.

The release of the transcript was certainly illuminating—

—and in ways that may not have been immediately apparent at the time. For example, why was Hope Hicks accompanied by so many attorneys at the hearing?

The real answer, of course, was to stop her from answering questions more than 150 times. But, even with that limitation, there was, some argued, even more reason to be thankful for the transcript.

Wait, so is this one of those situations where what we don’t know actually tells us exactly what we know?

The Takeaway: So, was this a win in terms of the long game or not? The jury is out.

What Happened: Even though no one outside of a handful of people were aware, apparently the US came very, very close to war with Iran last week.

What Really Happened: Tensions continued to rise between Iran and the US last week, and news at the end of the week made it clear just how tense things had actually become without most people being aware of it. Midweek, it was announced that Iran had shot down a US drone, something that Iran described as “provocation,” even as President Trump suggested it was an accident. But if that suggested that Trump was playing peacemaker, the reality turned out to be far more scattered.

And, before the administration even had the chance to call the New York Times story fake news, others were reporting the same thing.

Some who have long been paying attention to the situation between the two countries felt the need to argue that this brinksmanship was not unexpected.

Even as the White House was keeping quiet about whether or not reporting on the situation was accurate, the president himself confirmed it via Twitter.

But was his posturing having the appropriate response amongst his base? That remains unclear, judging by the public sample group.

So: More looming threat of war, anyone?

The Takeaway: As scary as all of this is, should we perhaps be happy that the missile strike had been called off?