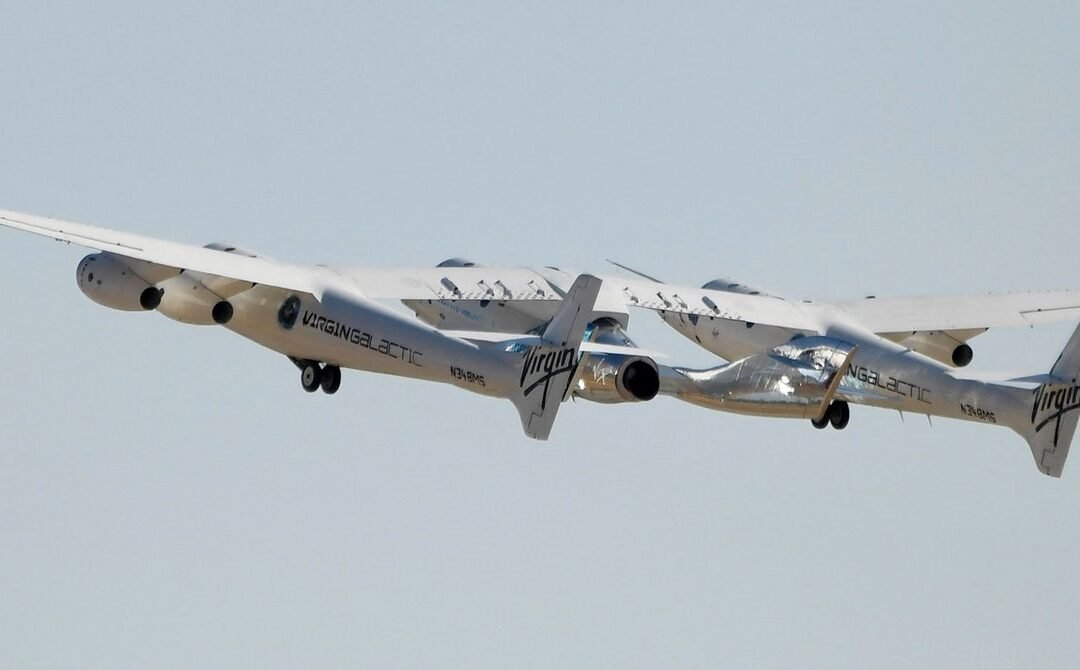 The sky over the Spaceport America in Las Cruces, New Mexico, was afire with lightning last night. The storm was sufficiently fierce to postpone Virgin Galactic’s planned rollout of its twin airships, mothership Eve and a space vehicle called VSS Unity, from their hangar. The delay meant that liftoff for today’s planned flight, which would send a crew on Unity 50 miles above Earth, would be pushed back 90 minutes.

But no matter—Richard Branson still had plenty of time to beat Jeff Bezos into outer space.

And he did it. At 9:25 am MT, about 45 minutes after taking off from the spaceport at the delayed time, the spaceship component of the duo, Unity, was ready to be freed from Eve. Branson and five of his colleagues—two pilots, three other mission specialists—were on board. Branson awaited the ignition of the rocket engine with a smile frozen on his face. Then fire belched from the vehicle, and in just under two minutes, it reached altitude. Branson was at the edge of space, around 80 kilometers up. Fifteen minutes later, Branson and his crew were back on Earth, ready to talk about how Virgin Galactic would be offering an identical experience to anyone willing to pay $250,000 or so. Hundreds are already on the waiting list.

Branson is the king of spectacle, so it’s not surprising that the launch had a festival feel to it. In the hours before the launch, Branson’s Twitter feed, along with those of his colleagues, was stuffed with slick videos intended to portray a hero’s journey. We saw him arriving at the spaceport on a bicycle—pedaled across the Atlantic?—greeting his crewmates, who were already decked out in their custom-designed Under Armour suits. “You’re late!” they told him. “Suit up!”

A longer version of the video showed them signing into a log book, with Branson identifying himself as Astronaut 001. The Virgin Galactic founder posted a photo of a welcome observer to the launch—Elon Musk. As Branson walked to the launch pad, he was surrounded by cheering spectators; he paused his fist-bumping stroll to sign some souvenirs offered by little children. The live feed itself was cohosted by Stephen Colbert. Waiting in the wings was Khalid, who had written a song, “New Normal,” to be unveiled upon the end of the ride.

The only disappointment was that the King of Media’s live feed in the capsule failed during the two minutes of actual space travel. Spectators were denied a view of Branson and crewmates spinning in weightless bliss. (The closest we got was about three seconds of heavily pixelated limbs waving around.) Nor did we hear from the British entrepreneur during his time freed from gravity. “We’ll be sure to capture his magical words and share them with the world when available,” said one of the Virgin commentators on the live feed.

Lurking behind today’s Virgin Galactic flight is some not-so-warm-and-fuzzy competition between billionaires. After a successful May crewed test flight, Virgin Galactic’s plan was to have three more test flights this year with Branson on the second of these. But after Bezos announced that he would be among the passengers on Blue Origin’s first crewed flight, Branson hastily changed the Virgin timetable. Unity would head back into flight on July 11, with the quickest turnaround the company has pulled off. And Branson would be on board, along with a cabin-full of his employees. In addition to the personal risk, there was a financial one: Virgin Galactic became a public company in late 2019 by merging with an existing firm on the stock exchange, and an unsuccessful flight would screw the pooch, in terms of share price.