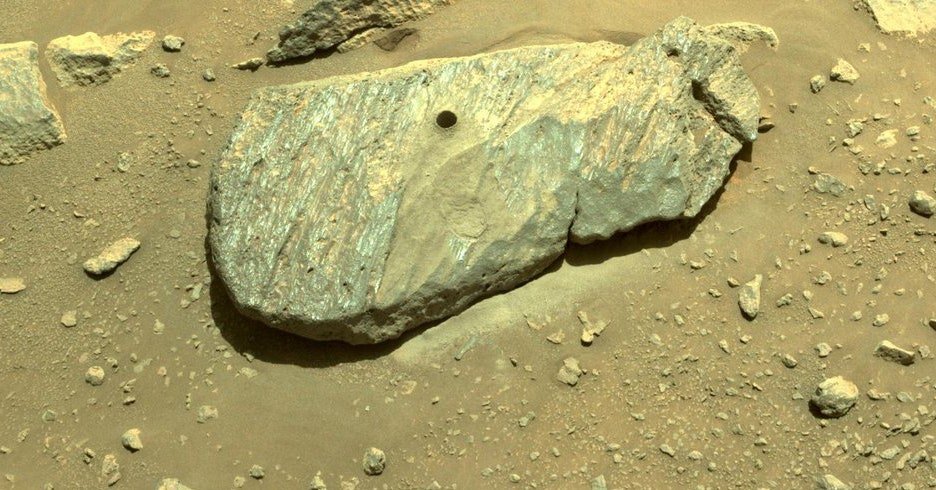 As the Perseverance rover drilled into a rock on Wednesday to collect a sample from Jezero Crater on Mars, Justin Simon, a planetary scientist at NASA’s Johnson Space Center in Houston, felt both nervous and excited. He has the honor of serving as the “sample shepherd,” leading the effort from millions of miles away, but the pressure’s on. “These samples not only will allow us to understand the geology of the crater but also minerals likely related to the history of water there,” he said yesterday.

But first, the rover had to actually capture a chunk of rock in a test-tube-sized container. An initial attempt in early August had come up empty. That first rock, nicknamed “Roubion,” simply crumbled to dust as the drill bored into it, and none of those bits made it into the container.

Simon can now breathe a sigh of relief. Perseverance’s second try, with a different rock, appears to have successfully extracted a Martian core slightly thicker than a pencil.

“We got that image of just a spectacular-looking core, a fantastic-looking cylinder, broken off cleanly. It looks geologically very interesting, something scientists of the future will enjoy working on,” says Ken Farley, a Caltech geochemist and project scientist of the Perseverance mission, which is led by NASA’s Jet Propulsion Laboratory in Pasadena, California.

But the analysis of the new sample is going to take awhile, because NASA scientists haven’t been able to get clear photographs due to low lighting conditions, which makes the images tough to interpret. To add more drama for the scientists, when Perseverance did a “percuss-to-ingest” procedure—shaking the sample to make sure the tube wasn’t overfilled, which would make the system jam when it’s stored—one image appeared to show an empty sample tube. (They’re pretty sure they got the sample, but they’re going to try taking more images in better light over the next couple of days.)

Perseverance’s first drill attempt, which essentially pulverized the sample, wasn’t a complete failure, as it yielded evidence suggesting the rock had been weathered, worn down by a river flowing into the lake crater billions of years ago. “It always had been possible that this lake was a transient event, like maybe a comet, rich in water, hit Mars and made lakes, and then it boiled away or froze within tens of years. But that would not produce the weathering we see,” said Farley in an interview earlier this week.

Since that rock was too powdery, the scientists then piloted the rover to a new area, looking for a different kind of rock to sample, using the Ingenuity copter to scout ahead. Perseverance trundled slightly to the west, where on a ridgeline the researchers found a larger, boulder-like rock, which they nicknamed “Rochette” and which seemed less likely to disintegrate when the rover deployed its tools on it. “It looks like a rock that, if you could throw it, would clank down on the ground. A good, healthy rock,” Farley said.

Before each sampling attempt, Perseverance performs reconnaissance by snapping a bunch of photos of a candidate rock. Last weekend, it also performed an abrasion test to see if Rochette was durable enough to sample. The rover is equipped with a rotary percussive drill (with extra drill bits) that both spins and hammers into the rock. This tool helps clear away dust and chip through the weathered outer layer. The abrasion was spectacularly successful, according to Farley, so the scientists decided to go ahead with grabbing a sample. Perseverance extended its 7-foot-long robotic arm, fired up the drill, and carefully extracted a core sample. Then it rotated the arm’s “hand” so that the sample tube could be inspected.