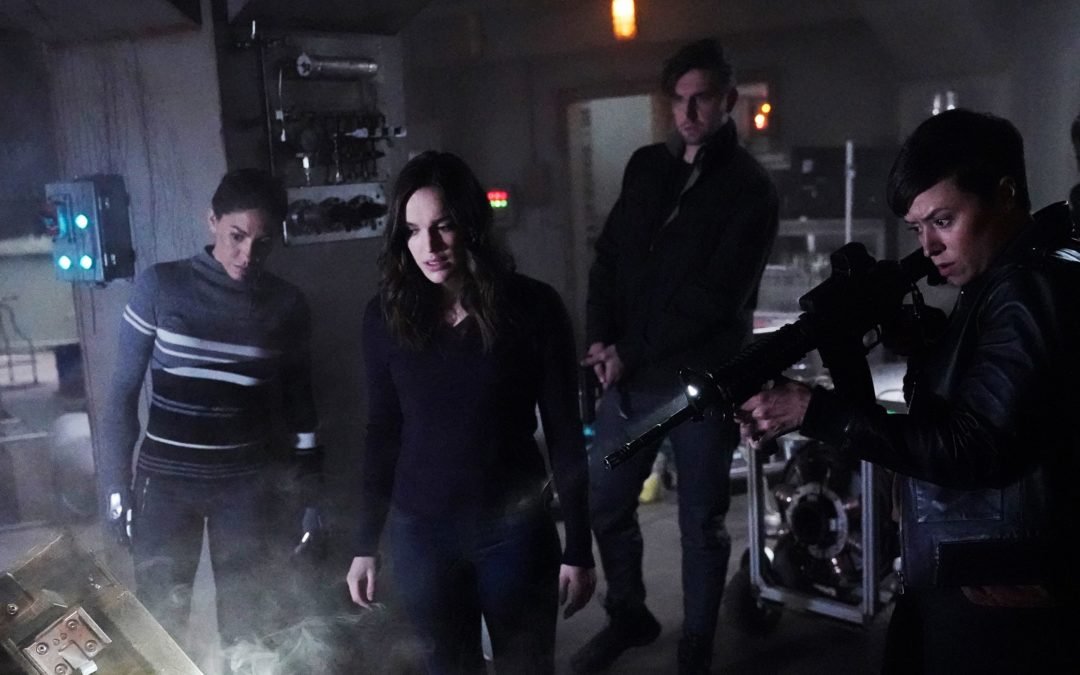 Odds are you watch Agents of S.H.I.E.L.D., because you’re reading this. That puts you in a sort of exclusive club. Which is to say, not many people watch this show. A hanging story-chad of the Marvel Cinematic Universe, S.H.I.E.L.D. has had ratings consistently low enough to make the prospect of its renewal every year a kind of comic-book cliffhanger.

Yet it was. Six times. No matter what—stranding characters on distant planets, swapping members of the ensemble in and out, touring through some back alleys of the Marvel Universe for characters whom it’d perhaps be a stretch to describe as beloved—Agents of S.H.I.E.L.D. was just … on, y’all. And now, as the show preps for its final season, it’s finally over. In the hours before the show’s Thursday panel at San Diego Comic-Con, the network finally took a shotgun-axe to its little sci-fi superhero spy show.

(The shotgun-axe is a thing in the show. That’s the kind of show it is.)

“We’re shooting the very last episode right now, so a lot of us are feeling this,” said show cocreator Jed Whedon from the stage of San Diego’s Hall H, an auditorium I am contractually required to describe as cavernous. “Part of the reason we’re really enjoying this is that we’re going through what the characters are going through, which is, this is our last mission together.”

(The dragons aren’t a thing. The show doesn’t have dragons. Probably.)

S.H.I.E.L.D. started out as part of the Marvel Cinematic Universe. It’s center was Agent Phil Coulson, played by Gregg as the rectitudally high-and-tight right-hand man of Samuel L. Jackson’s Nick Fury in Iron Man and sacrificed to narrative gods in Avengers: That First One. But death is just something people get better from in comics; Gregg was a sunny spot in the movies’ sturm and drang. Coulson came back to take over TV S.H.I.E.L.D.

In the early years, other Marvel cinematic characters occasionally showed up. Lady Sif from Thor did a guest spot. Some of the visual effects showing magic looked like the ones in Doctor Strange. Even Jackson’s Fury came in to shoot a gun, and if you watched closely you noticed that the helicarrier that saves the day at the end of Avengers: Age of Ultron gets handed off from a S.H.I.E.L.D. episode. In the movies—Captain America: The Winter Soldier, primarily—S.H.I.E.L.D. the agency turned out to be rife with bad guys, and it disbanded, and it sort of did on TV, too. The agents went on the run, ran a shadow-S.H.I.E.L.D., I think, and fought an offshoot of the movie bad guys.

For the first couple seasons, Agents of S.H.I.E.L.D. was a sometimes predictable show that had a second job supporting Disney-Marvel’s dominion over all of pop culture time and space. But then it leveraged its hard-to-explain renewals to quietly become one of the zaniest, weirdest pieces of sci-fi on TV.

The renewals aren’t that hard to explain, actually. The show had a marketing value, sure, and a small but avid fanbase, like a lot of genre TV. But since Disney owns the ABC television network, and ABC produces the show, it’s owned-and-operated, relatively cheaper to make because the network doesn’t have to share money with some other studio. Think of it as Disney’s ABC’s Marvel’s Agents of S.H.I.E.L.D. Even a lower-rated, in-house-produced show can make more money, in the end, than an expensive but popular one made by someone else.

That’s a potent combination, as it turns out. Few people watching, little oversight from a network because the stakes are low, a fan base distilled down to the most committed gladiators … what’s a writers’ room to do? Well, any damn thing it wants, is the answer. Guest stars: Patton Oswalt, Bill Paxton, Kyle MacLachlan, Ron Glass, Edward James Olmos, Ruth Negga, Blair Underwood, Powers Booth. Deep dives into Marvel’s back catalog: Ghost Rider, Deathlok, the Absorbing Man, Graviton, Mockingbird.

The show went to a virtual matrix universe where everyone was a bad guy, and the Big Bad was a magic robot lady. When Ghost Rider showed up, he wasn’t the iconic 1970s motorcycle demon with a flaming skull. This was the new Ghost Rider, who drives a low rider (but also has a flaming skull). (The actor who played him, Gabriel Luna, is slated for a Ghost Rider show on Hulu.) There was time travel, space travel, a post-apocalyptic Earth rescued via time and space travel, and blue aliens. A beloved character used suspended animation to join his friends in a timeline where Earth was destroyed, but then died while helping them escape and change that future. So his friends went to space to fish him out of suspended animation in the newly remade present, because now there are two of him. Coulson died again! And came back again, only this time as a bad guy with no memories, from another planet, on our Earth to fight zombie alien space bats.

It’s a lot, right? Don’t get me wrong, it wasn’t always great. But it always felt like real humans were sitting in a room authentically trying to outdo whatever they’d tried last time. “We never know when we’re shooting the end of the thing if we’re going to get another season,” Gregg said in Hall H. So every season it’d get weird, come to a head, and go out big. Someone, probably in a suit, maybe in Burbank, would say, um, actually could you just do more? The show would say, errr, OK. And it would just get weirder!

That’s a rock-solid legacy. Marvel’s TV shows are about to change radically. The deals with Netflix that led to Jessica Jones and Daredevil, among others, have ended; the new streaming network Disney+ has announced shows more clearly derived from the movies, about Loki, Falcon and the Winter Soldier, and others. The days of Marvel on a broadcast network are passing into legend. As for Agents of S.H.I.E.L.D.? “This is the flagship show of Marvel television,” said Jeph Loeb, the head of that division. “And it’s the show that I love most.” Which, you know, I get it. Thanks for the ride, Agents. In the era of peak, golden-age, highly burnished, super-professional polish, TV needs weird, too.