So You Want to Prepare for Doomsday 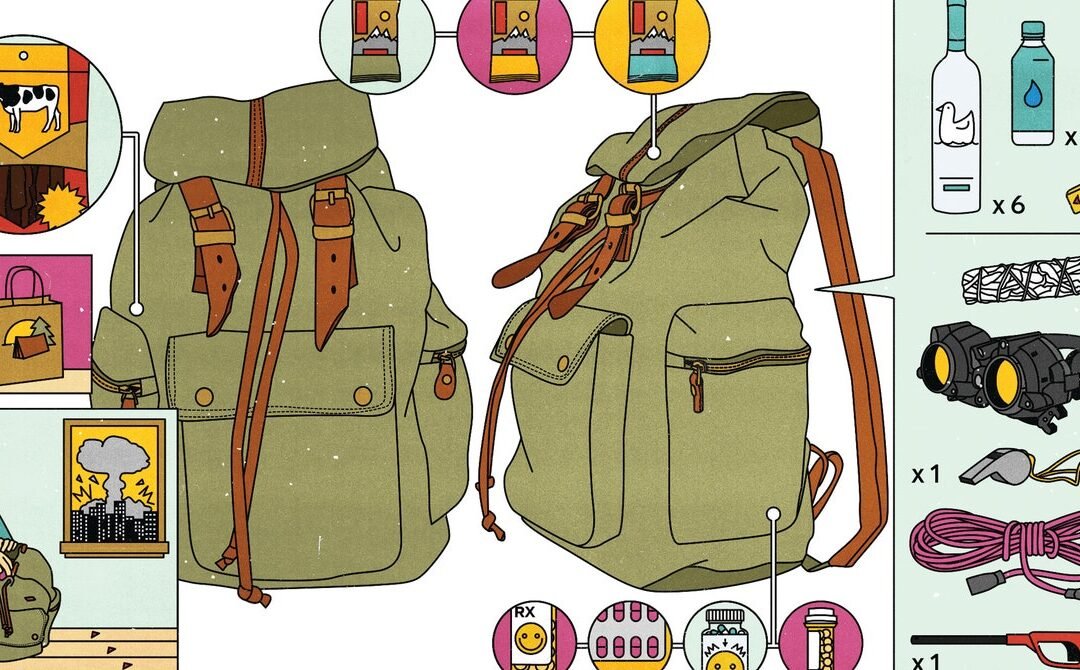 The preppers have the best stuff. It’s because they operate under such constraints: You have to pack your whole society—money, tinctures, food powders—in a lone bag. Then, when the big bug-out comes, you slip on your paracord bracelets and shemagh scarf and vanish into the woods, to an already-scouted redoubt obscured by trees. There, beside your tent, you gnaw jerky and sip bleached snowmelt out of 5-gallon bags, wrapped in a 26-micron bivy that reflects 90 percent of body heat. A society of one.

By day you carefully inventory the dozens of curated objects in your bag, rifling through sub-pockets, enumerating ibuprofen, contemplating seed packets, calculating caloric yields. Portable hand-cranked flashlight. Clove oil for toothache. At night, with darkness yielding to bright gray inside your night-vision goggles, you patrol, hand hovering near your CZ-75 P-01. Far off down the mountain you hear the cracks, groans, whistles, and shots of a splintering society. A week ago you administered an Oracle database. Now your job is to ­survive.

And you dream: One day, after the smoke of civilization has drifted away, you’ll link up with others exactly like you. A new world will rise out of your duffel bag. You’ll hang up solar-powered mesh networks from trees and make your own internet. You’ll transact for potatoes and penicillin on the blockchain under the watch of vigilant owls. But now, jerky.

What the preppers do is fully acknowledge their fears and turn them into a particular aesthetic. Like goths. They make their anxieties perfectly legible. I get it. I read My Side of the Mountain when I was a kid. But while prepper gear is awesome, I keep thinking: We should be trying to avoid a civil war, not packing for one.

The Aesthetics Wiki has hundreds of different entries—Preppy and Punk, of course, but also more modern aesthetics like Dark Academia (Eurocentricity, Whit Stillman, sweaters), Vaporwave (synths, VHS boxes, teal), or Cottagecore (short­alls, Hozier). Many of the aesthetics have left- and right-wing offshoots: Vaporwave has produced Laborwave and Fashwave; Tradwifery (patriarchy, heteronormativity, childbirth) can be understood as reactionary Cottagecoreism.

I would have told you I don’t have an aesthetic. But a few months ago my family moved to an old house, not far from our old apartment. This house has a yard and asbestos and a plaque on the front that says: 1913. Multiple generations of telephone wiring run along and inside the walls, and jacks abound: Bell System four-pin 404A jacks and modular 6P4C jacks, too, all useless in 2021. I like them. They suggest critical infrastructure come and gone. The people who lived in the house before us sent a kind, slightly melancholy note, wishing us the best, but we never met them. Pandemic transaction.

When we moved in, we immediately started to plan for an apocalypse. (My spouse’s elementary school overlooked Donner Lake in California, so worst-case scenarios come easily to her; she has a disaster-preparedness Pinterest board.) I figured out where we could put the tilapia tanks and pondered a new fence. We could store barrels of powdered food in the basement. Following decades of living within the collective fortress of an apartment building, a house—just sitting there by the street—feels extremely vulnerable. After a few days, a nice older neighbor dropped off a box of candy. Hardly the Purge.

Oddly, we keep not buying furniture. We did find a dining room table, cut out of a lane in a decommissioned bowling alley, with little inlaid arrows to guide your throw. Cheap and heavy. We bought some chairs, eBayed out of a university library in Georgia. Each chair carries the shadow of thousands of college butts. We like things that remind us of people gathering, playing, or working. Not shabby-chic, but institutional-heavy. Things that have been rubbed down to a shine.