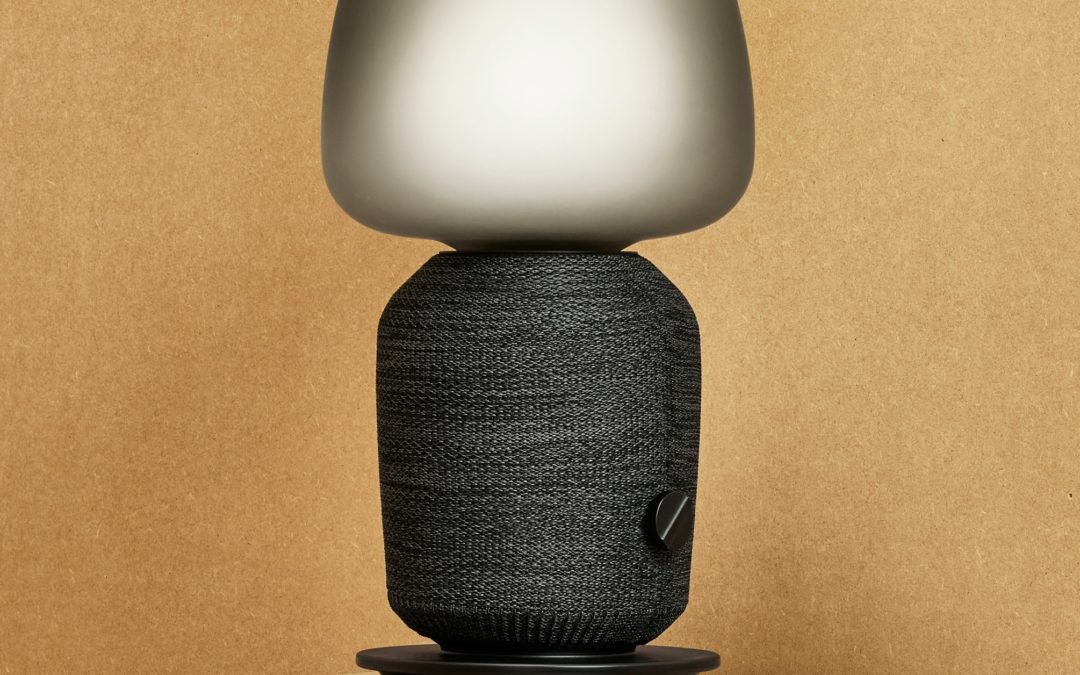 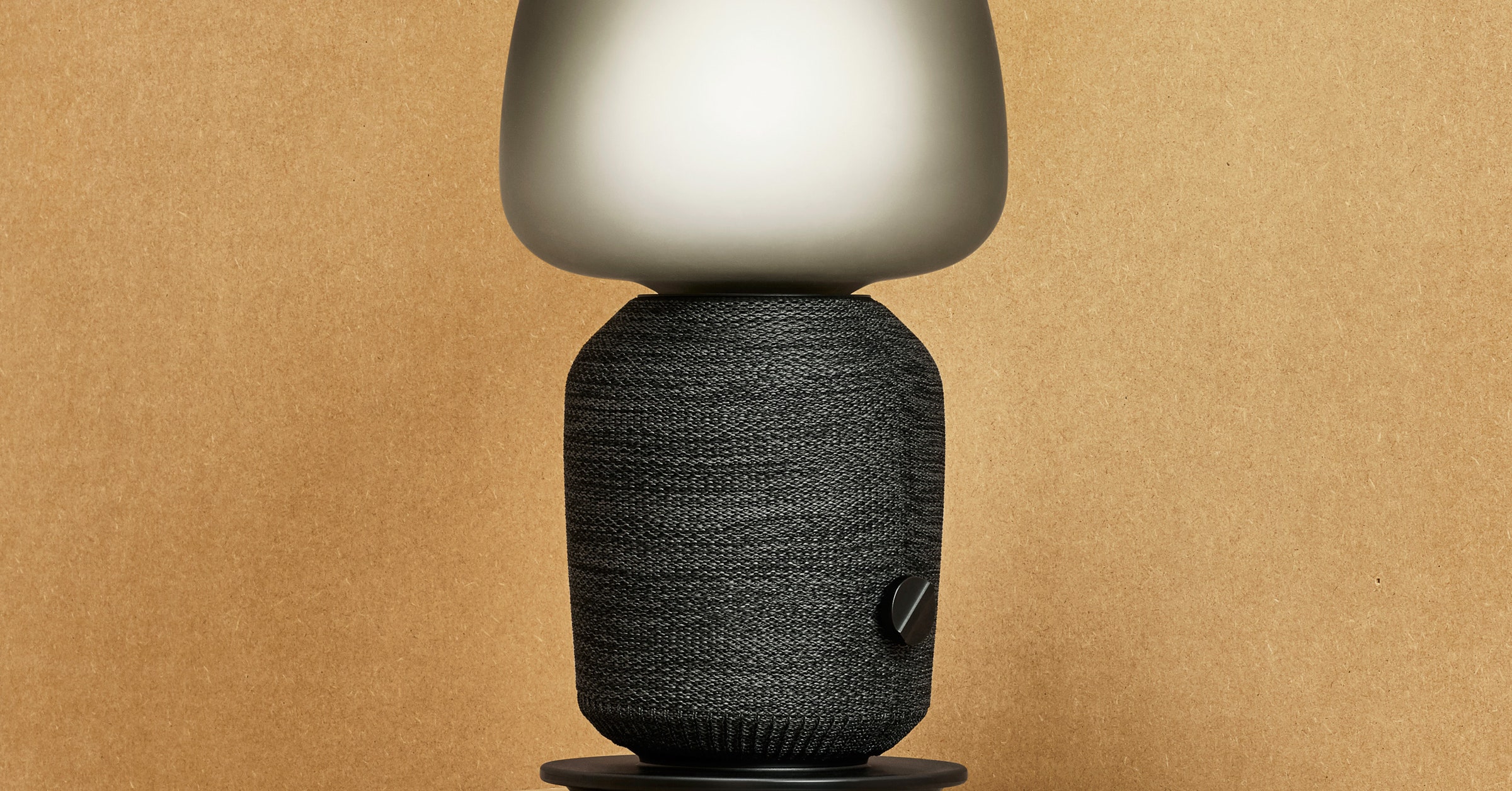 Our home lives are shrinking. Last year, the average size of new houses built in the US fell for the third straight year, according to the National Association of Home Builders. Worldwide, the UN expects more and more people to gravitate toward urban areas over the next 30 years. The smart homes of the future, then, may not involve thousands and thousands of square feet for networked appliances and gadgets, but rather internet-connected products that maximize the space they take up by serving more than one purpose.

That’s part of the thinking behind Ikea’s partnership with speaker maker Sonos, the result of which is a new line of audio products being released under the name Symfonisk. As a result of this new collaboration, your lamp is a Sonos speaker. So is your floating bookshelf, affixed to the wall. I have them both in my apartment. One of them, the bookshelf speaker, nearly disappears, hiding in plain sight. The lamp is much more … noticeable.

Ikea wants to ensure that its reputation evolves as our homes and lifestyles do, and partnering with Sonos a few years ago was part of that. Netherlands-based Ikea is known as much for its streamlined furniture aesthetic as it is for its not-so-streamlined furniture assemblies. As the company got into the smart-home space—first with connected light bulbs, then with smart blinds—it aimed to eliminate inconveniences. Sonos, a pioneer in wirelessly connected, great-sounding audio products, was an ideal match.

Now the speakers are finally here and will ship in early August. They’re affordable, as far as Sonos speakers go: The table lamp speaker costs $179, while the bookshelf speaker costs $99. That price, a full $50 cheaper than the aging Play:1, makes the bookshelf Symfonisk the cheapest Sonos speaker available. Some aspects of these speakers make them feel less premium than other Sonos speakers. But overall, the Ikea-Sonos collab is a brilliant idea. After using these, I can’t wait to see what they come up with next.

Tune In, Turn On, Light Up

The Symfonisk lamp should be appreciated for its concept but not necessarily for its execution. Physically, it lends itself well to the shape of a speaker. Its bottom half has a rounded, cylindrical shape. It looks like an Apple HomePod.

Unlike the HomePod, though, the speaker portion of the lamp is covered in an unglued knit fabric. The fact that the fabric can be moved around with your fingers means that it sometimes puckers or looks as though the stitching is not aligned, like the speaker hastily threw on a sock as it was running out the door.

A round, aluminum on/off dial protrudes from the side of the lamp/speaker. Its base is a lightweight, hollow, plastic disc. The lampshade is made of mouth-blown frosted glass. It’s not quite a globe, not quite a muffin top. It’s more like … a mochi? Yeah, that’s it, a glass mochi. It houses a single bulb (one isn’t included, but you can put any candelabra-style E12 bulb in the socket).

The lamp is not small. It measures 16 inches tall and 9 inches wide. The white version—there’s also a charcoal version—sits on my end table, and it stands out. At night, it gives that corner of the living room an eerie glow but doesn’t offer a whole lot of illumination across the room.

One of the differences between these two new Ikea Sonos speakers and other recent Sonos speakers is that the Ikea versions use the old Sonos mechanical control buttons. This is a very small thing, but it contributes to the overall sense that these are less sleek than, say, the $400 Sonos Beam soundbar. Which, for what it’s worth, also pretty much disappears in my living room.

The bookshelf speaker can be used as a floating wall shelf, one that can handle a load of up to 6.5 pounds. But I positioned my loaner unit as a vertical bookend on an existing shelf and really liked the way it fit in.

It too is tall; 12 inches high when positioned vertically. It’s taller than all of my books. And yet it blends into the bookshelf, which is the point. Like the base of the table lamp, the speaker is made of ABS plastic. Its front has a fixed fabric grille. And like the table lamp, the bookshelf speaker has to be plugged in at all times. Portable speakers these are not.

I’ve spent a fair amount of time writing about how these Ikea Sonos speakers look, because that’s a big consideration when you’re buying a piece of furniture or a home accessory. But, obviously, how they sound is important.

Anyone who owns other Sonos speakers already has a pretty good sense of how they work. Sonos speakers connect to one another over your home network so that you can stream your preferred music services and podcasts to multiple speakers throughout your house. You can either group them all together or control each speaker independently.

You do this via the Sonos app or, in some cases, with your voice using either Amazon Alexa or Google Assistant. You can even run both on the same speaker. While other smart speakers, like those made by Apple, Google, and Amazon, clearly prioritize their own services or voice assistants, Sonos is a breath of fresh agnostic air.

Specification-wise, the Ikea speakers are comparable to $199 Sonos One. That model has one mid-woofer, one tweeter, and two Class-D digital amplifiers. The Symfonisk speakers include the same drivers and amp.

There is, of course, more to consider with speakers than just watts and woofers, things like sensitivity and distortion and software-enhanced calibration. But overall I’d say the Symfonisk speakers offer a warm, mellow sound, perfect for a small apartment, even if they wouldn’t blow the lid off a giant home.

The steady bass of Lou Doillon’s “Too Much” came through smooth on the Ikea table lamp beside me while I worked from home. Snares were subtle, not too harsh, and Doillon’s vocals sounded rich and melodious. The same song on the bookshelf speaker sounded slightly thinner, and even at a higher decibel level, Doillon somehow seemed farther away. But to be clear, it sounds like a Sonos.

The Ikea speakers don’t have built-in microphones, so you can’t shout commands directly at them. You can, however, pair them wirelessly with another Sonos voice speaker or even another smart gadget, like an Amazon Echo Dot or Google Nest Hub, and control the playback with voice that way. I have mine paired with the Beam, which is set up with Amazon’s Alexa.

One of the frustrating things about Amazon’s Alexa is the specific syntax it sometimes requires; my early commands for Alexa to play music on my Ikea Sonos speaks fell on deaf robot ears. Once I went through the Sonos app, though, renamed each speaker something memorable (“Ikea Bookshelf”), and then asked Alexa to play sound through that, it worked. You can also set up multiroom audio commands, but you’ll have to go through the specific voice-control app, not Sonos’ app, to do that.

When you’re not attempting to use voice, you’re going to control your music through the Sonos app, as you would with other Sonos speakers. Ikea is working on a version of its smart home app that will offer some music controls, but that won’t launch until the fall. That also means that if you have Ikea smart home products, like the bulbs or blinds, and you have the Ikea Symfonisk speakers, you’re going to have to use separate apps in the near term to control these different devices.

The Ikea Symfonisk speakers are, at their core, Sonos speakers. But they’re also less expensive than other Sonos speakers, and they are designed to function as both speakers and sleek-looking home furnishings (even if the latter isn’t really achieved—the lamp isn’t my style).

Which might just be where we’re headed: less space, more smarts, and still the sound of music.