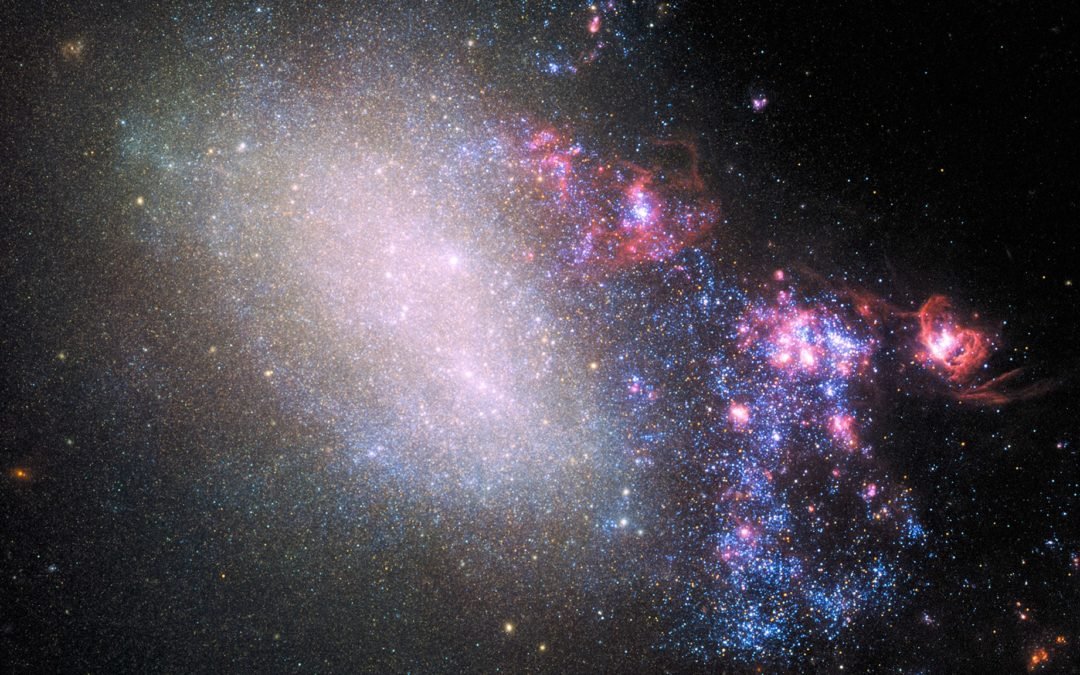 Billions of years ago, the universe was much more tightly bound; it held closer together. I mean, it’s not like galaxies didn’t like each other, but sometimes two would clash. That’s exactly what happened here. The center spiral galaxy, NGC 4485, was sideswiped by the smaller, brighter, yellow galaxy NGC 4490 hanging out at the bottom. As these galaxies tussled and swapped material, they inadvertently sparked a flurry of new star formation. You can see nebulae in bright pink and young stars glowing blue.

Last week NASA’s Mars Reconnaissance Orbiter celebrated its 60,000th orbit around the red planet. This photo is just one example of how useful this spacecraft is: Take a gander at Jezero Crater, the future landing site of the Mars 2020 Rover. Analysis of the sediment shows that minerals there were likely associated with ancient water, and the location is exactly where scientists want to touch down their Martian explorer.

The European Southern Observatory’s Very Large Telescope has taken some remarkable photos of the universe, but it also deserves its own close-up along with our home galaxy. The clear skies of Chile’s Atacama desert not only lend themselves to conducting astronomical observations, but the calm air and minimal light pollution mean the speckled arm of our Milky Way Galaxy can also shine through.

In another example of why age means nothing in terms of real beauty, gaze at galaxy NGC 3384, which is full of ancient stars. Galaxies like these glow diffusely, like a fuzzy cosmic light bulb. This is because they don’t contain young and hot stars, like most spiral galaxies do, and instead are much older and cooler galactic bodies. Regardless of what’s happening on NGC 3384 some 35 million light years away, this beacon of classic starlight is quite beautiful.

NASA’s Christina Hammock Koch lives on the International Space Station, and when she’s not doing experiments and all sorts of astronaut things, she finds time to take stunning photos. “A couple times a year,” she says, the ISS “happens to align over the day/night shadow line on Earth … Beautiful time to cloud watch #nofilter.” You can also make out the thin blue line of our atmosphere against the blankness of space. It’s so easy to forget that we live on an actual, rotating planet.

This false color rendering of Acidalia Planitia on Mars reveals some pretty interesting crater features. Toward the center is a bright blue mound of sand covered in rippling dunes. These are created by the wind that blows fine sand particles around, the same way they do in deserts here on Earth. Images like these, of course, don’t reflect what things really look like on Mars, but can help highlight characteristics that inform scientists about what’s happening on our neighboring planet.