Space Photos of the Week: Jupiter Is a Storm-Eat-Storm World 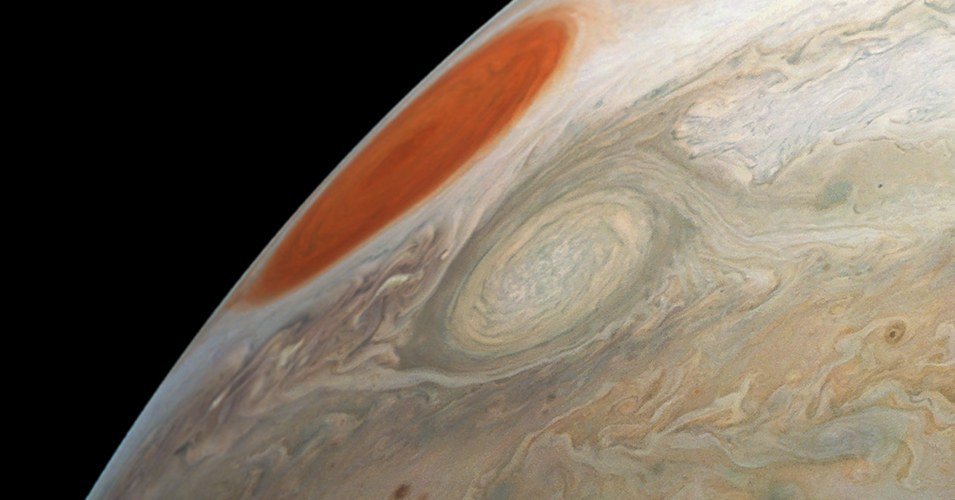 Jupiter is not just the king of the planets, it is king of the storms. Just when you think Jupiter has enough freakish weather, another front moves in. NASA’s Juno spacecraft witnessed two storms in December during its most recent flyby. You can’t miss the Great Red Spot, but look to its right at a massive tempest called Oval BA, which formed in the year 2000 when three smaller storms merged together. Scientists think this is how the Great Red Spot may have formed as well.

The Cassini spacecraft spent 13 years orbiting Saturn, and now thanks to data from its epic mission, we know exactly how long a day is on Saturn: It’s 10 hours, 33 minutes, and 38 seconds. Because Saturn doesn’t have regular features on its surface, it was hard for scientists to track the spin of the planet. The key to solving the mystery was hiding in wave patterns in the rings: The spin of the planet sets off very small waves there, and Cassini was able to measure those telltale ring patterns, giving us the exact length of a Saturnine day.

Inside this blue and purple vision, the planetary nebula ESO 577-24, is the bright beacon of a dying star. The European Southern Observatory’s Very Large Telescope captured this star’s last breaths as the gas from the nebula is pushed out into space. This stunning cloud will only exist for a short time, around 10,000 years, which on the cosmic scale is barely a blip. As for all those yellow point of light, those are galaxies.

On January 21 many across the US and Europe were treated to a total lunar eclipse— where the Earth passed directly between the moon and the Sun. The resulting “blood moons,” as they’re often called, stem from the effect of sunlight passing through our atmosphere; what is able to creep around the curvature of the Earth reaches the moon and makes it look red. This photo, from the European Space Agency, was taken over Lake Maggiore in the Alps while the eclipse was at totality.

In this photo taken by NASA’s Lunar Reconnaissance Orbiter, you can see two craters, both around 1,600 feet in diameter. But one is pretty smooth while the other is strewn with boulders. This difference is likely due to the different ages of the craters. Scientists have long relied on the pockmarked surface of the moon to learn about the formation of the solar system from the impacts absorbed by the Earth and the moon in its early days, billions of years ago.

This Martian surface feature looks like blue snakeskin. NASA’s Mars Reconnaissance Orbiter and its HiRISE camera capture the surface of the planet in unprecedented detail, and that includes dunes like the ones seen here. Such images appear blue because the material in the photo is very fine; we are looking at small grains of sand and dust. Dunes like these are formed by wind and water, but given that water is no longer present on Mars, the winds around the planet are actively shifting these tiny morsels of sand into gloriously organic shapes.