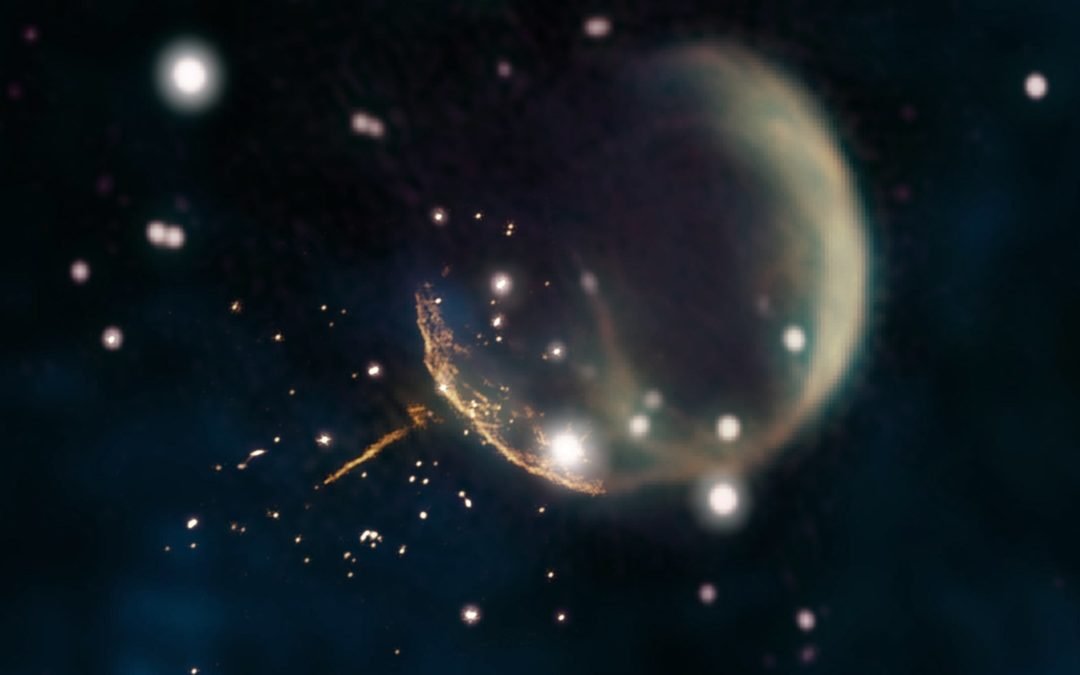 Space seems quiet and void … until you get smacked with a pulsar speeding through space and spinning at 8.7 times a second! Scientists using NASA’s Fermi Gamma-ray Space Telescope and the Very Large Array in New Mexico picked up the intense radio waves coming from this high-energy object, called PSR J0002+6216, in the constellation Cassiopeia. The image shows the ghost bubble from a supernova remnant, and on the left you’ll notice a long streak of light. That’s the tail left by this pulsar as it shoots across the great beyond at 2.5 million miles per hour.

Early this year, NASA’s OSIRIS_REx entered orbit around the asteroid Bennu. Scientists want to collect a sample from this ancient rock and bring it back to Earth for analysis. When the spacecraft arrived, however, things didn’t go as expected. For starters, Bennu is not smooth, but a rough and rocky place. It also turns out that this is a rare type of asteroid called an active asteroid—which means Bennu shares some characteristics with a comet, spitting material out into space. This photo shows pebbles and dust being thrown off from the right of Bennu, posing a new challenge not just for the team that wants to fetch material for analysis, but for the safety and viability of the spacecraft itself. Watch out for flying rock, brave explorer.

The times they are a-changin’ on Neptune. NASA’s Hubble Space Telescope has been observing this far-out planet for some 40 years and has noticed the presence of storms. On the image at left, in the upper part of Neptune you’ll make out a dark splotch: That’s a new storm. Scientists are increasingly intrigued because while they realize storms emerge and then fade, some seem to disappear about as quickly as they pop up—and this blue sphere’s appearance continues to change. (The photo at right, taken by Voyager 2, shows Neptune’s Great Dark Storm swirling in the center.)

In February, NASA’s Juno swooped by Jupiter for another epic photo shoot featuring its massive storms. The Great Red Spot, of course, is at the upper right. These images not only are beautiful, but also they are crucial for scientists on the spacecraft team as well as others eager to gain scientific insight about Jupiter’s active atmosphere.

If only Isaac Asimov were around to see it: This stunning red and ghostly figure is an active star factory called W40, otherwise known as the Butterfly Nebula. A particularly bright cluster of stars at the center of the nebula creates the “wings,” as hot jets of gas eject dust and debris into space. W40 lies some 1,400 light years away from Earth, about the same distance as the famous Orion Nebula.

Spring is here: We recently experienced an equinox, when most parts of the planet experience the same amount of sunlight. This happens twice a year, once in March and once in September. The March equinox marks the changing of the season and the promise of lots more sunshine in the Northern Hemisphere. On March 20, NASA used its Solar and Heliospheric Observatory to look at the Sun in four different UV wavelengths, producing this colorful rainbow series.