Space Photos of the Week: Postcards From a Martian Winter 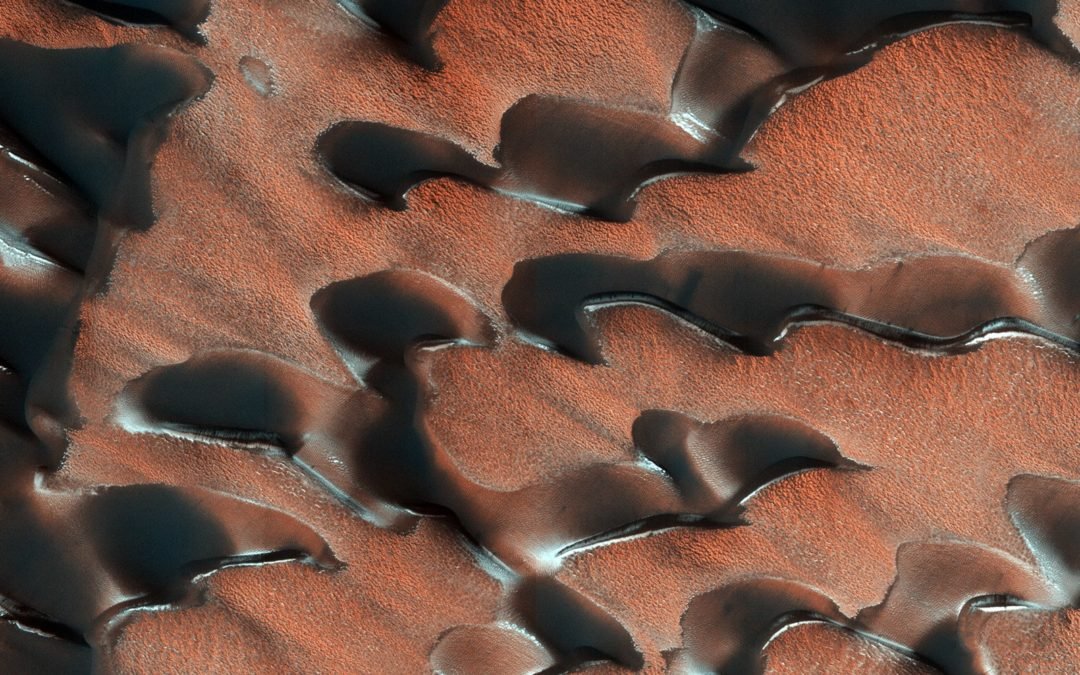 This year will be a big one for the Red Planet, with the launch of NASA’s Mars 2020 rover from Cape Canaveral in Florida this summer. The rover isn’t due to land on Mars until February of 2021, but we can still enjoy the planet’s riches in the meantime. Although very much an alien world, it has a lot in common with our planetary home. The Red Planet has ice caps on its north and south poles, which grow in winter and melt some in summer. It has weather and seasons too, even if they don’t look quite like ours. That means the landscape is changing all the time, a metamorphosis that NASA’s Mars Reconnaissance orbiter has been well-situated to document. Images captured by the satellite’s HiRise camera reveal just what a Martian winter looks like. 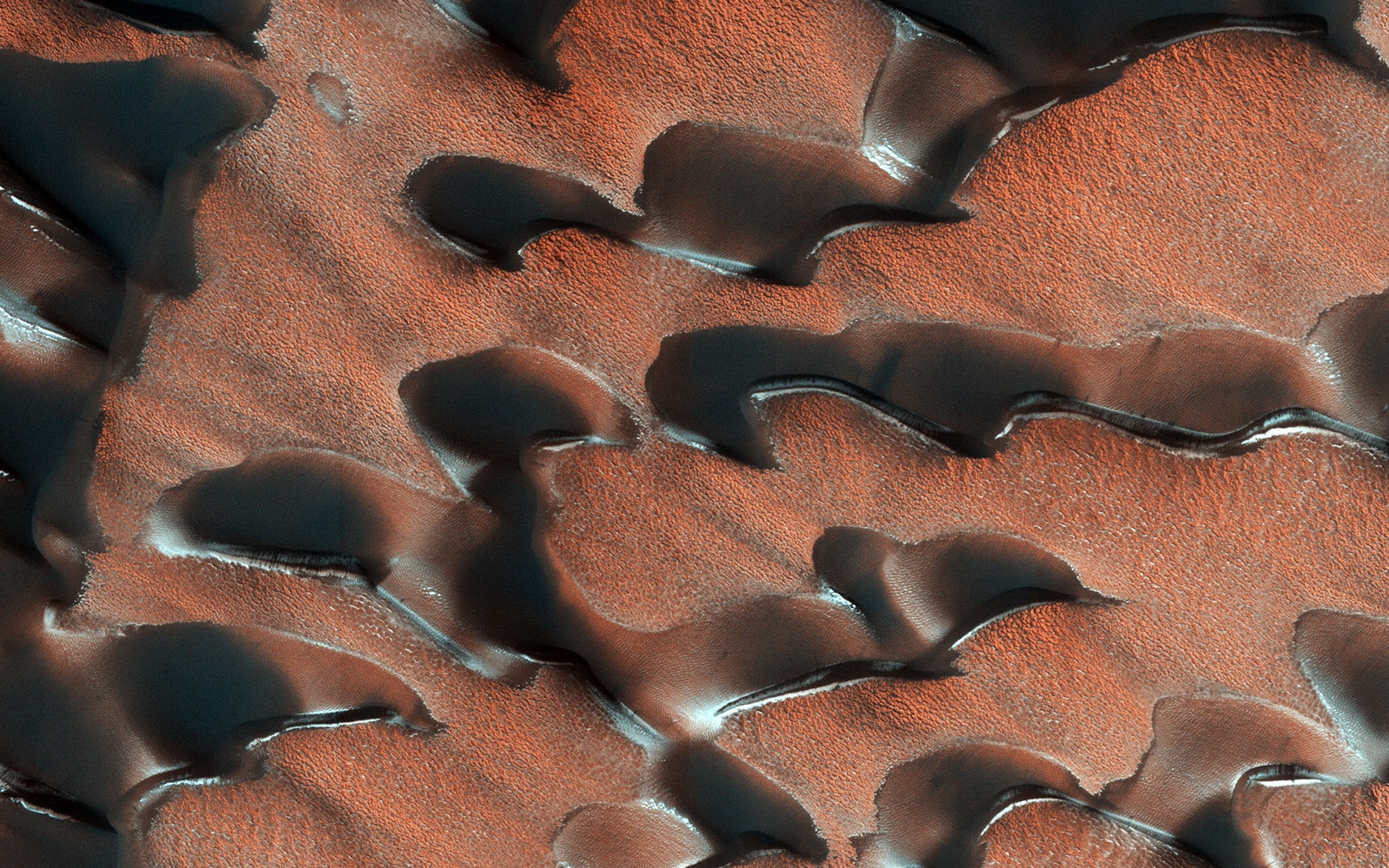 Sand dunes in the northern polar region of Mars glimmer here in winter. The darker sand is basalt left over from ancient volcanic activity. The iconic red Martian terrain is speckled with a white-ish dusting of ice. Not unlike Earth’s seasonal weather, these white patches will eventually sublimate (turn from ice to vapor) during Mars’s summer months.Photograph: NASA/JPL-Caltech/University of Arizona 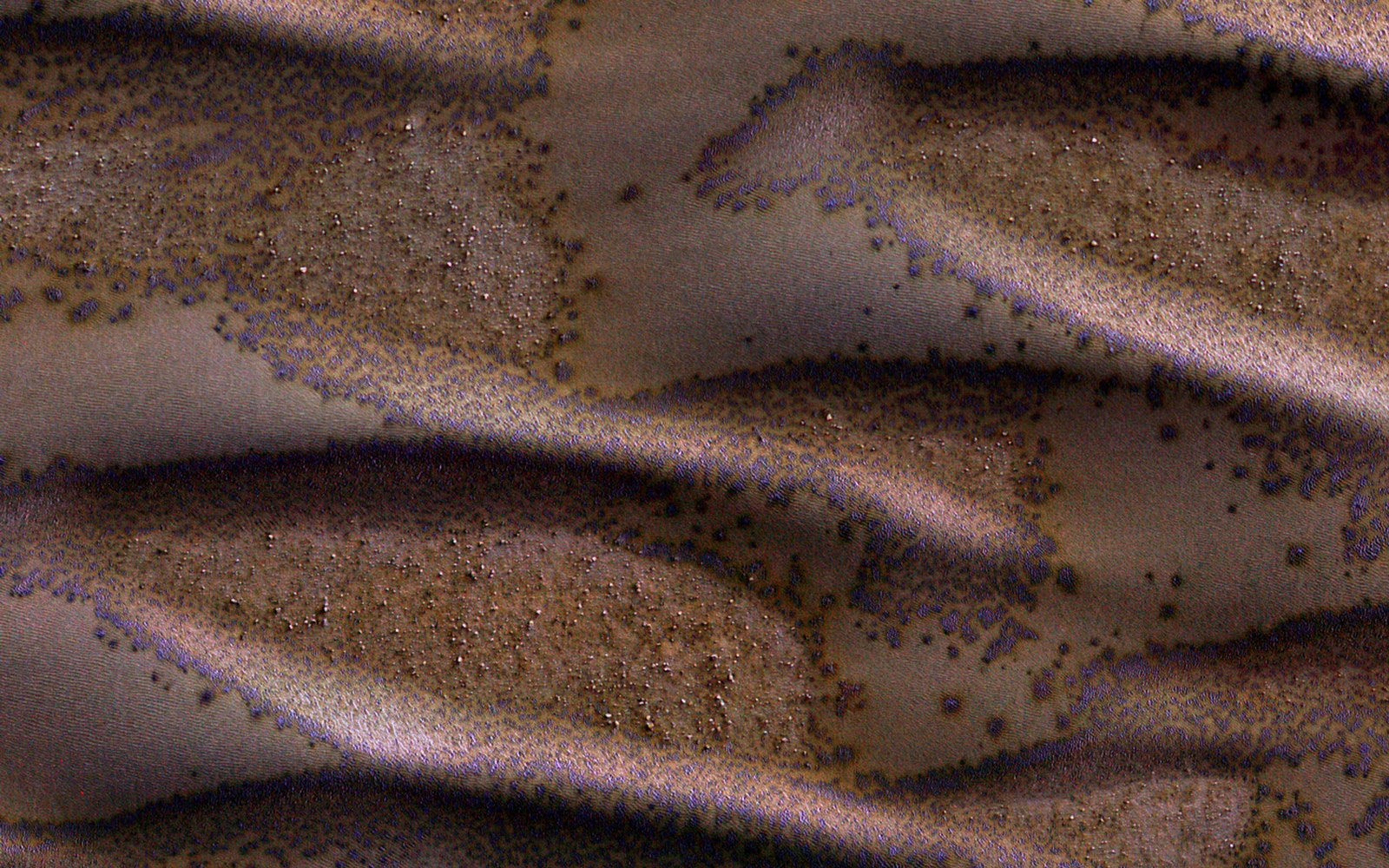 The scale of this photo makes it’s hard to tell how massive these sand dunes are. But if you look closely, in between the dunes you’ll see little specks that are actually giant boulders. In HiRise images, finer material such as very small-grained sand often shows up as darker features, which we can see scattered throughout this photo.Photograph: NASA/JPL-Caltech/University of Arizona 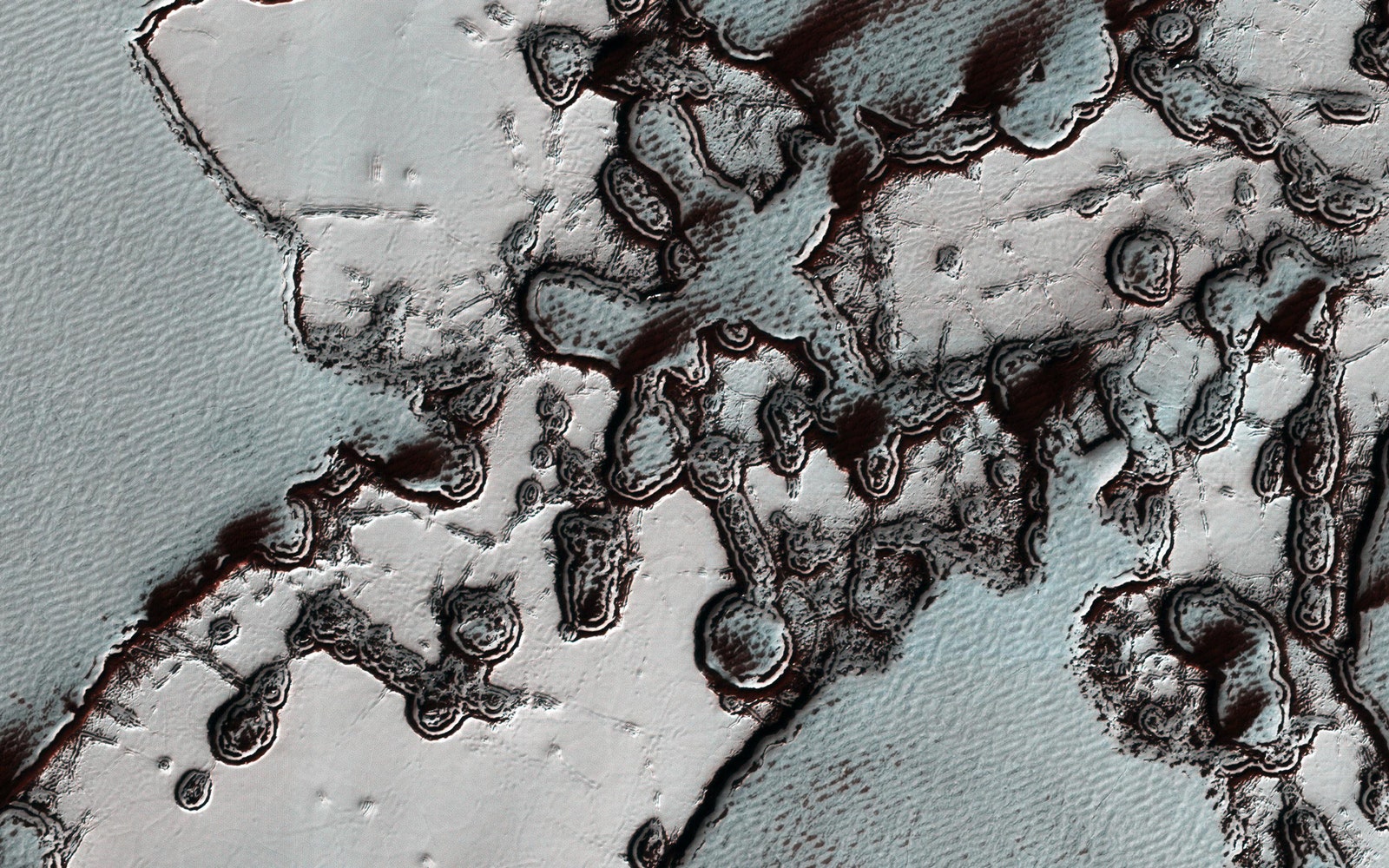 This image looks like something seen through a microscope, but no, this is a large swath of Martian terrain. This section of the South polar ice cap consists in part of frozen carbon dioxide, which melts over the summer months. The melting carbon dioxide ice reveals pockets of darker material below the surface.Photograph: NASA/JPL-Caltech/University of Arizona 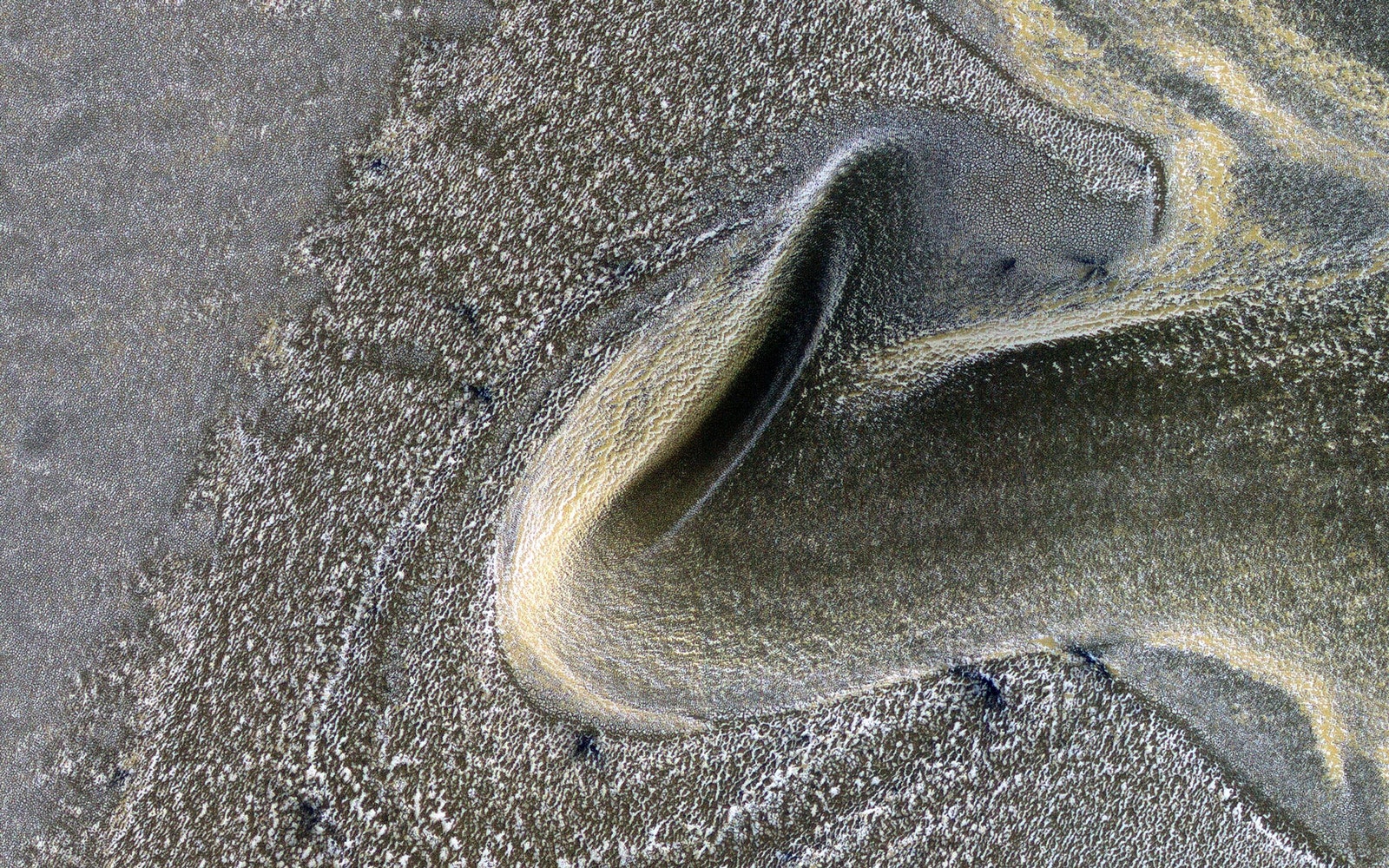 Even for Mars, this is an odd one. It sort of looks like we are falling into a black hole here, but this is actually carbon dioxide frost mixed with Martian dust atop some dunes. As the small icy patches sublimate away, darker sandy material appears below.Photograph: NASA/JPL-Caltech/University of Arizona 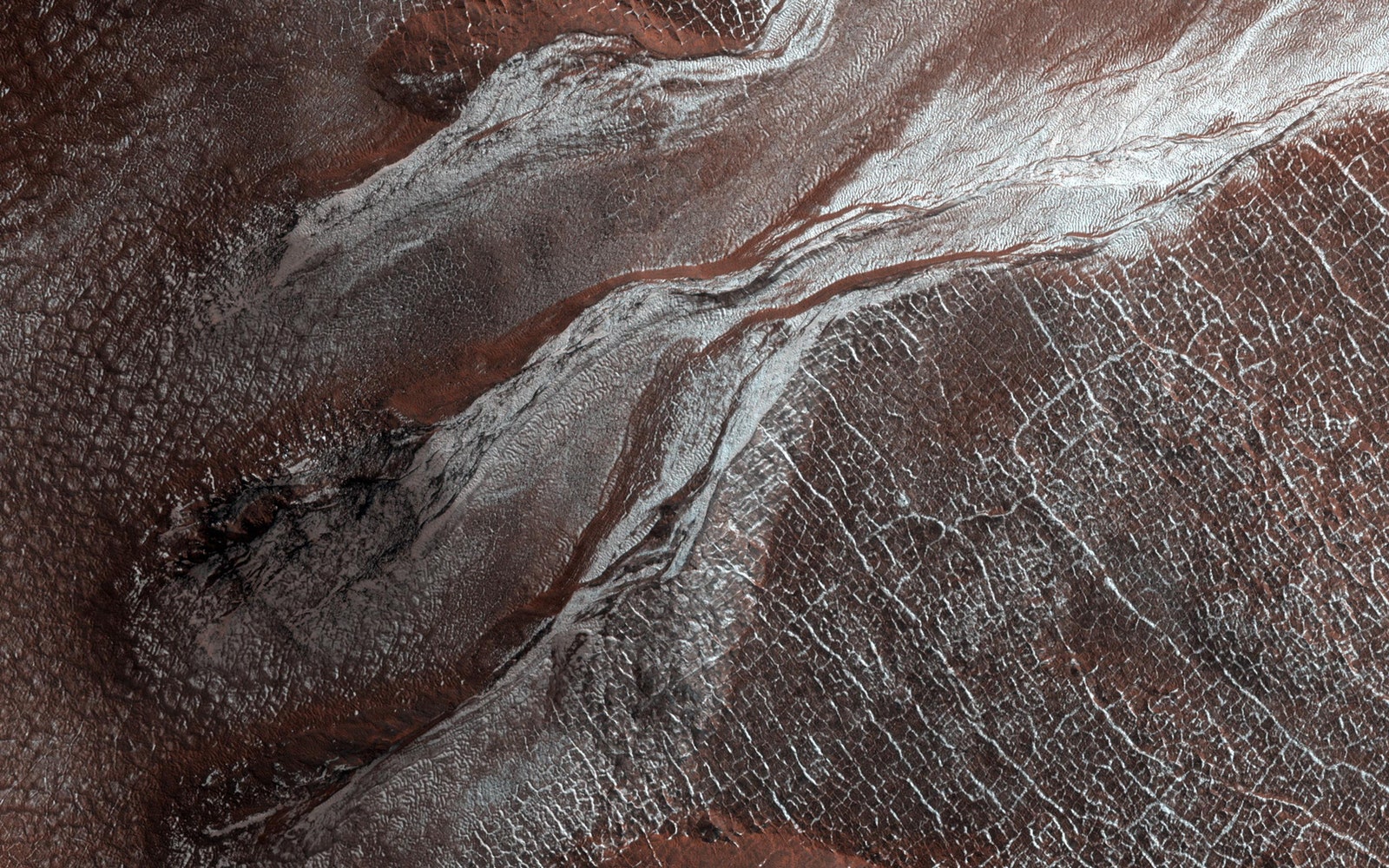 There are gullies just like this one all over Earth. This Martian one, with its apparently stagnant river-like lines, features frost in early springtime. The dark red of the planet stands in stark contrast to the white of the frost. This seasonal change reveals features that otherwise tend to be invisible, such as the crackling along the surface to the right and the textures on the left.Photograph: NASA/JPL-Caltech/University of Arizona 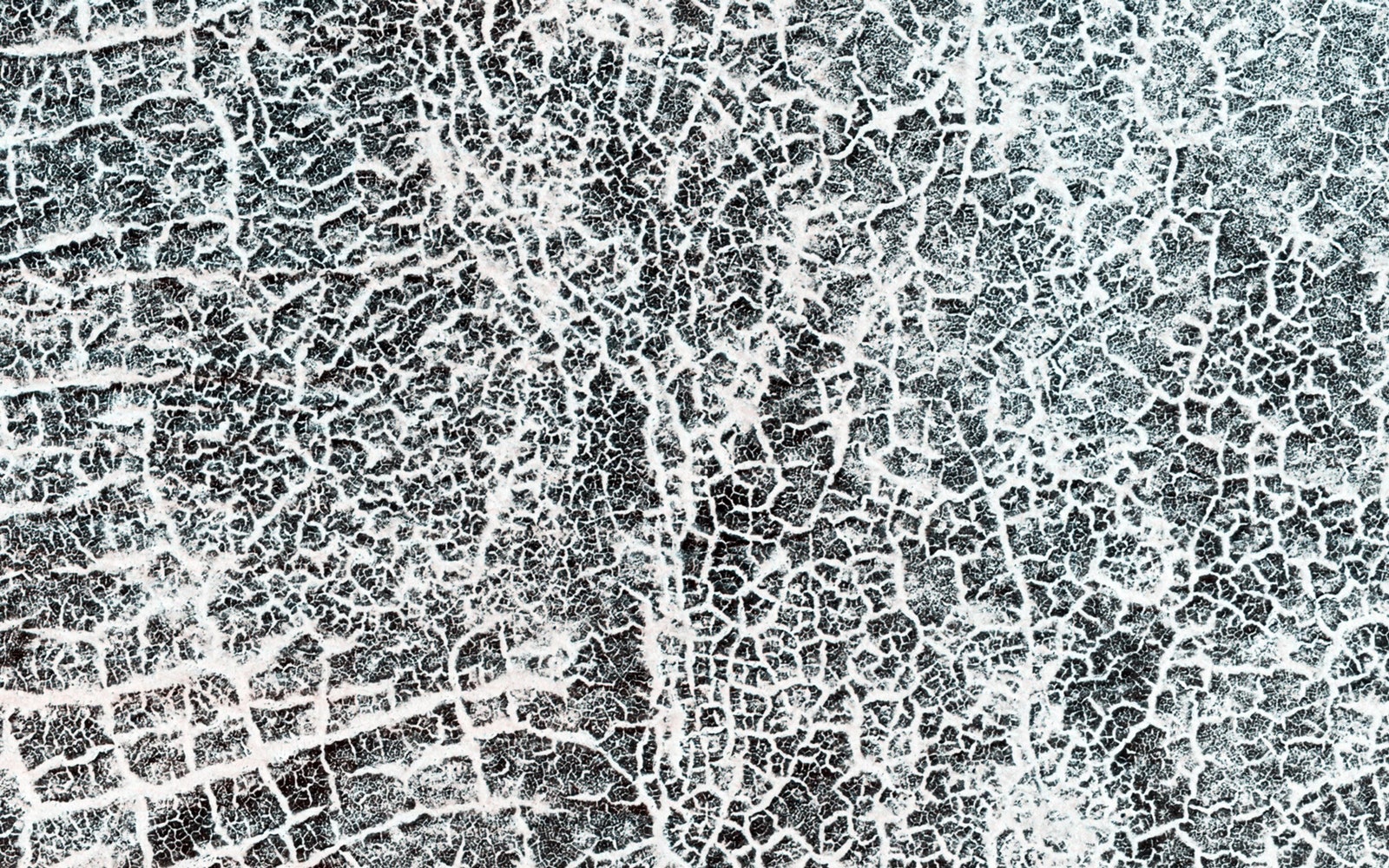 These dendritic patterns form over many seasons of winters and summers. As the land freezes and thaws time and again, the landscape changes. These repeating polygons make this southern landscape a surprising place to find a series of fractals on the ever fascinating Martian landscape.Photograph: NASA/JPL-Caltech/University of Arizona

Want to see more? Check out the entire collection of space photos here.