Space Photos of the Week: Salt of the Jupiter Moon 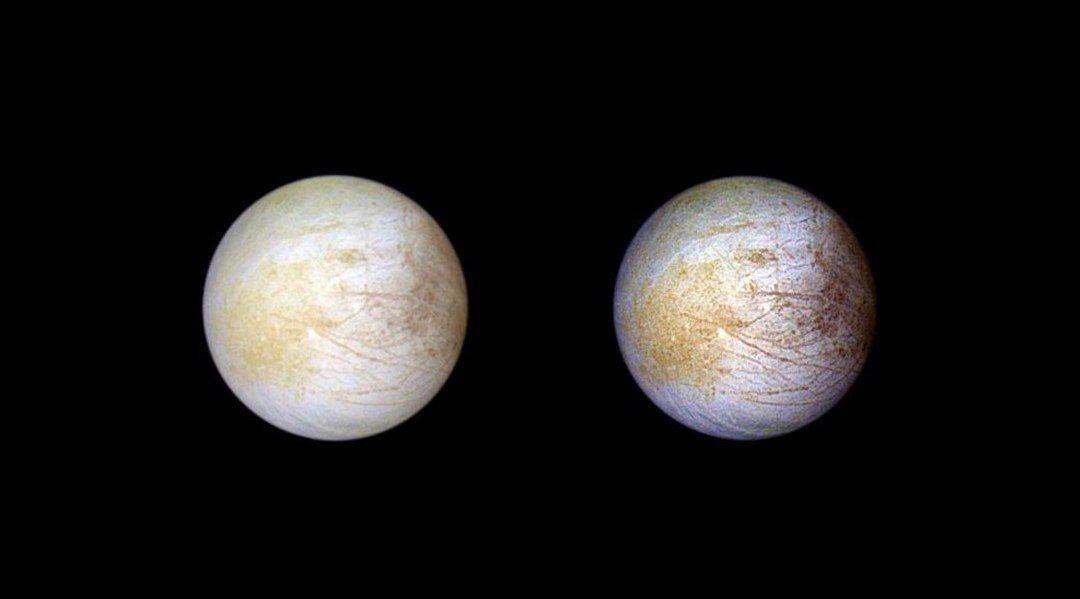 Europa, a moon in Jupiter’s orbit, is one of the most interesting places in the solar system. Below its thick crust of ice, the moon has an ocean layer that holds more water than we have here on Earth, making it is a prime spot to look for life beyond our planet. These two global photos of Europa show large regions that appear yellow—a coloration caused by sodium chloride, better known as table salt. The findings, based on visible-light spectral analysis from the Hubble Space Telescope, show that large regions of the surface are covered in plain, old salt, too. We’ve known that this moon’s ocean contained some kind of chemical salt, but the fact that it’s the salt that’s in our own seas raises the intriguing potential that there could be life there, too.

These are the golden years for galaxy NGC 7773. Hubble captured this spiral in great detail, and you can see a phenomenon that tends to occur in older galaxies: the bar of stars across the middle. Astronomers think this feature, which differentiates spirals from barred spirals, takes form later on in a galaxy’s lifetime, as stellar material gravitates toward the center of the system of stars, gas, dust, and dark matter.

Paging Dr. Bruce Banner: NASA’s Fermi Gamma Ray Telescope has detected its highest-energy gamma rays yet. Green dots on this colorful map of the sky show where the Fermi instrument detected these bursts of radiation. (The galactic plane of our Milky Way runs along the center.) Scientists are still trying to understand more about these gamma rays, which happen only as the result of the most violent events, such as when a massive star turns into a supernova, or when two neutron stars collide and create a black hole.

NASA’s Stratospheric Observatory for Infrared Astronomy has been studying the massive black hole at the center of our Milky Way in infrared. This image shows the black hole along with magnetic field lines; as surrounding matter gets sucked up, dust particles and gas get heated up and run across these lines aglow in infrared light. By studying these magnetic field lines, astronomers can better understand how matter and black holes interact. They’re not so worried about our world being devoured, since the Milky Way’s black hole isn’t as active as those in the center of most other galaxies. And why is that? Another good questions for researchers and for SOFIA.

If you’ve ever plunked money into claw machines at an arcade, you understand how difficult it is to snag a stuffed toy from the glassed-in container. Now imagine manipulating the claw on another planet a million miles away. For NASA’s InSight, such feats are a piece of cake: In February the lander placed its instruments onto the Martian surface. Here we see the claw grabbing hold of the Heat Flow Probe, which will take the internal temperature of the red planet.

Mars has a long face: These features in the Cerunius Fossae region are fault features known as graben. These are created when the planet’s crust stretches and moves apart, allowing for material to run down along the fault. You could even say, to the chagrin of everyone but exogeologists, that the dirt on Mars is graben the ground.