Space Photos of the Week: The Trail of Opportunity and More 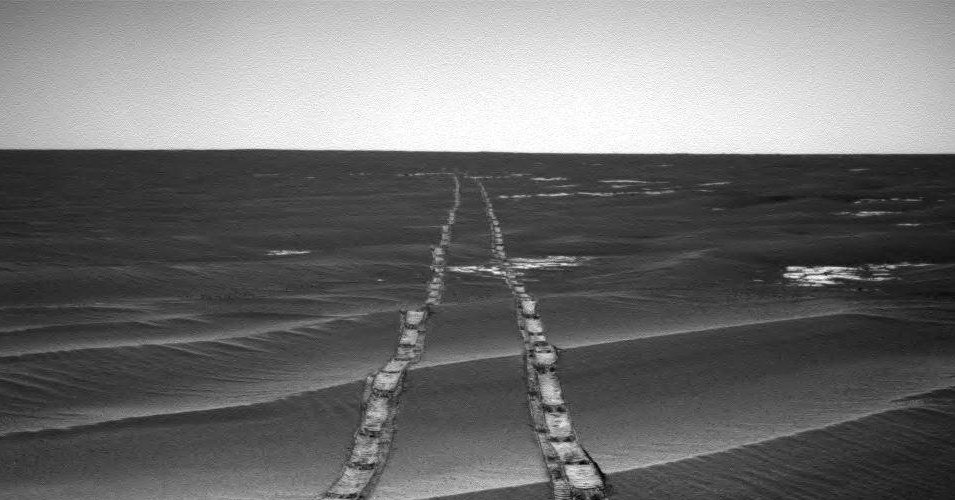 The long and Martian road: In August 2010, the Opportunity rover looked back and took a photo of its tracks in the Red Planet’s sand. This image features the lovely ripples of small dunes created by the wind, similar to the ones we have here on Earth. Opportunity took many epic shots like this as it cruised around Mars for 15 years. Now it’s lost to us.

Behold more dunes: These crescent-shaped sand formations are called barchan dunes. From this photo, captured by the Mars Reconnaissance Orbiter’s HiRISE camera, scientists can tell the prevailing winds are blowing east to west. The wind pushes fine grains of sand up slopes, creating ripples and rendering these mesmerizing shapes.

Opportunity is lost, but we’re not done with Mars yet. Earlier this month, the InSight lander successfully placed a thermal wind and heat shield atop its seismometer. NASA’s Mars Reconnaissance Orbiter was flying overhead and not only spotted the dark-colored solar panels of the lander, but also the new shield as well—which appears as a tiny white dot just below. Around the lander and shield are shaded regions that show the dust kicked up during landing, when InSight fired its retro rockets to slow down. This is the kind of cool photo we get when we have our robots spy on our other robots.

Off to the far side of the solar system we go, using the Hubble Space Telescope to check in on what’s new with Uranus and Neptune. Like Earth, these icy planets have seasons, but they span decades rather than mere months. On Neptune at right, a storm has gone dark: A vortex about 6,800 miles across has popped up in the top center, along with white “companion clouds.” Meanwhile over on Uranus (left), the north pole is domed by a giant storm. Scientists ascribe the strange weather on Uranus to the planet’s rotation, since it’s tilted almost all the way on one side. Uranus faces the Sun with its northern pole during the long summer, and the theory goes that this polar hood stems from changes in atmospheric flow.

The ALMA compound in Chile has long been capturing planets on the brink of formation, but now the European Southern Observatory’s telescope has taken a photo of a multistar system called AS 205. Of extreme interest is the disc at lower right, which is a binary system. Though we’re not at the point where we can see the two stars within the disc, the gravity of each interacts with the other and leaves evidence of their tug-of-war behind. Such systems aren’t out of the ordinary, according to astronomers; the key issue is that their duality affects how planets are formed. When you have more than one star, material gets moved around in more complicated ways.

Are you star-struck? This composite photo of the Triangulum galaxy, also known as Messier 33 or M33, uses 54 fields of view from Hubble. Scientists’ measures identify 25 million stars spread out here, from left to right, over a distance of about 14,500 light years. M33 is a spiral galaxy, like our own Milky Way, so astronomers study both of these spiral galaxies as a proxy for our own.