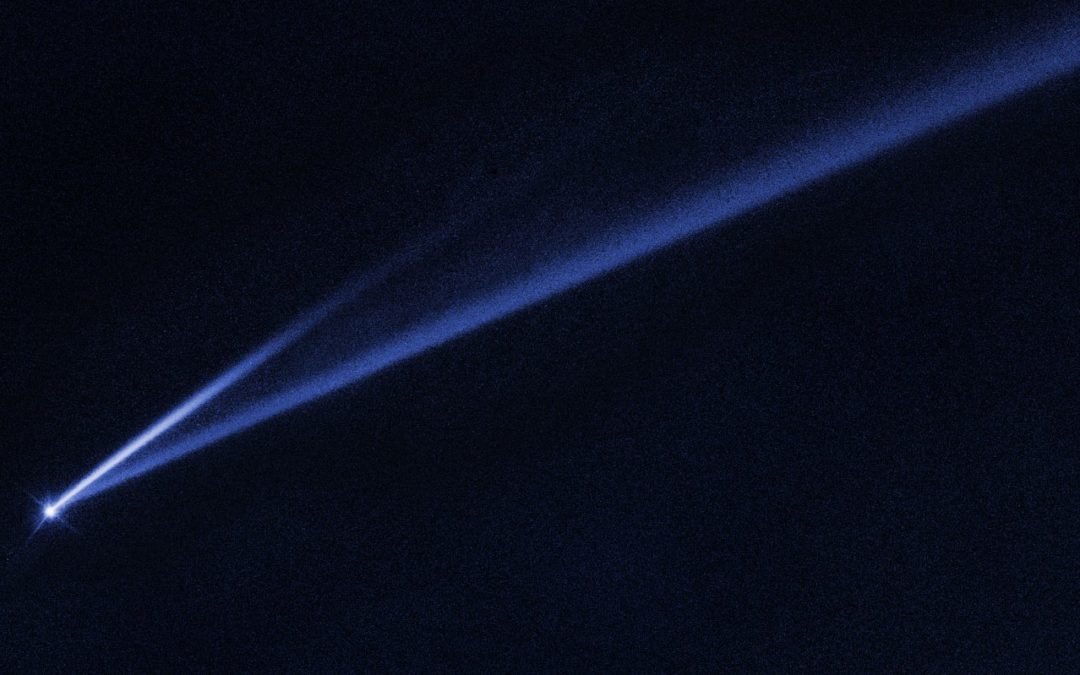 This is Gault, an asteroid that is slowly breaking apart as it moves through space. It’s about 500,000 miles long and over 3,000 miles wide. Scientists think that it’s being destroyed by a mechanism called YORP—basically sunlight hits the surface of the asteroid and warms it up. The radiation that escapes due to the heating also takes some of the angular momentum, causing the asteroid to spin faster. This results in the asteroid losing material and starting to separate. Eventually the two tails will spread out and dissolve into space.

Clouds swirl and dance around themselves above the Indian Ocean in this photo taken by an astronaut on the International Space Station last month. Towards the upper left of the photo the thin, bright blue veneer of our atmosphere is what contains us and separates us from space.

This long colorful photo shows a region on Mars called Meridiani Planum, the home and final resting place of NASA’s Opportunity rover. The rover spent 15 years exploring the red planet, studying rocks and even detecting the first evidence of water. But it was snuffed out by the worst dust storm to ever hit Mars. The end of the mission was sad, but the fact that it lasted so long was evidence of how well engineered Oppy was—it was only supposed to last three months!

This image is based on information from The European Space Agency’s Mars Express Satellite and digital models. It’s a region called Chalcoporos Rupes and it’s covered in dust and craters. You can also see the dark tracks left over from the dust devils that sweep through the area. This oblique angle almost makes it feel as though we have a jet pack on and are slowly descending to the surface. Watch out for dust devils!

This photo shows a flock of cosmic ducks, or at least that’s what NASA sees. This is Messier 11, but it’s also known as the Wild Duck Cluster because it is said to resemble a flock of wild ducks. Space ducks, can you see it? Scientists think that Messier 11 formed over 200 million years ago and is what’s known as a compact open cluster. If you look at the center of the photo you’ll see a lot of bright blue “ducks.” Those are younger stars characterized by the hot gas they give off.

NASA combined data from three telescopes to create this photo showing a massive stellar nursery called W51. All of those bright regions? Massive stars are forming there. One of the new stars they’ve discovered is nearly 100 times more massive than our own sun. By studying star forming regions like this, scientists are able to determine the age of the clouds of gas and dust that these stars are born into and better piece together how star formation works.