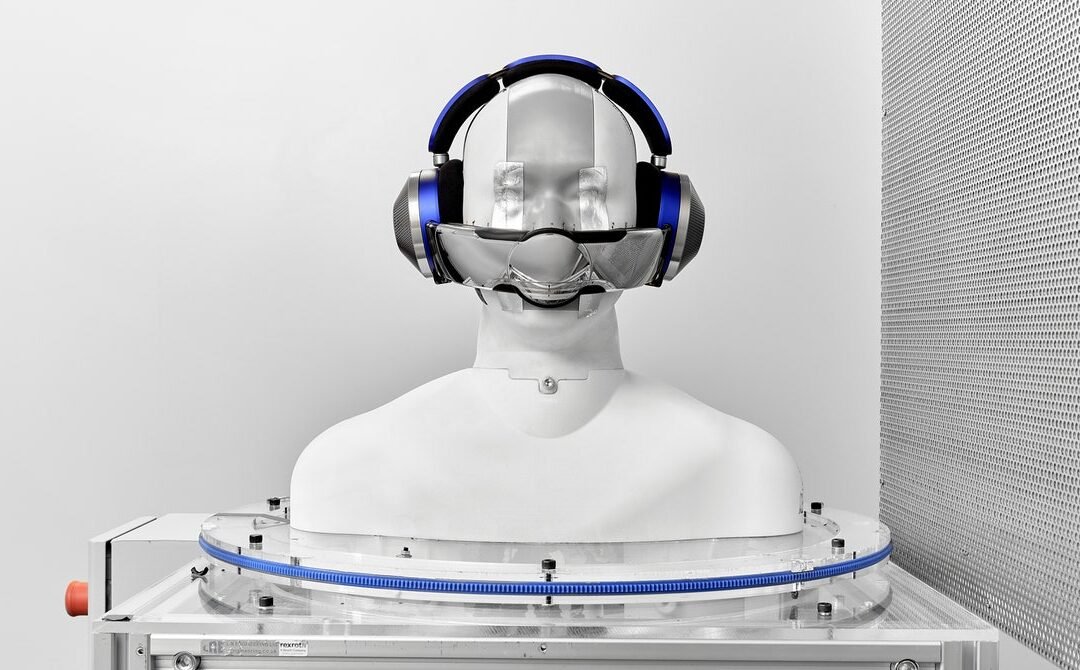 Undoing the atmospheric damage caused by centuries of unchecked industrialization was never going to be easy. Encouraging the uptake of low-emission vehicles, aggressive levies on antiquated industrial practices, investment in public transport infrastructure, citywide reengineering, and rapidly evolving tech innovation will all help, but why bother when a personal air-filtration device can keep you healthy?

Getting back to the product, the chrome-effect plastic mouthpiece sits away from your face, making it significantly more comfortable than a traditional face mask, and, fortunately, it can be pulled down quickly if you need to talk to someone. And, despite its considerable size, the whole unit is surprisingly well balanced and comfortable to wear—though we have not tried the Zone for periods longer than a few minutes.

How does it work? Two tiny precision-engineered compressors within each ear cup draw air through dual-layer filters. The negatively charged electrostatic filters capture ultrafine particles such as allergens, while a potassium-enriched carbon layer grabs gas pollutants like nitrogen dioxide and Sulfur dioxide.

It is a typically Dysonesque feat of engineering, and the execution—if not the aesthetics—is impressive. The Zone has four air-purification settings, including Auto, which uses onboard accelerometers to judge how fast you need your clean air delivered.

It’s worth noting that, despite pumping perfectly clean air over your face, the Zone is not a replacement for a surgical face mask, but Dyson is supplying a face covering attachment (we didn’t get to see this) that forms a seal and meets FFP2 filtration standards.

As for the headphones, behind the fans and filters Dyson has squeezed a neodymium electroacoustic driver, with multilevel active noise cancellation and all the features we’ve come to expect, including mics for calling, ambient pass-through modes, and app-based EQ tweaking.

But why combine headphones and air purification? Because those fans stuck to the side of your head are noisy, and without the ANC you’ll hear nothing but a whir in your ear. Dyson readily admits it’s a problem of its own creation, and as a result the ANC and passive noise isolation on the Zone seems (in our limited preview) impressive, and you can barely, if at all, hear the fans while wearing them.

It’s an entirely different situation, however, for the person sitting next to you. Who cares though? This is personal protection, and to hell with the rest of the population. It’s a case of, ‘I’m all right, Jack,’ or maybe, given the chief engineer involved, that should be Jake? The Zone is Jake Dyson‘s baby, apparently. Jake is James Dyson’s son, and he designed the company’s innovative CSYS desk lamp.

In the few minutes we had with the Dyson Zone, we could tell the headphones were well made, but the sound performance was definitely on the safe side. Neutral, if you’d prefer. The ANC didn’t seem to cloud the music like it often can, but we weren’t bowled over by the majesty of the audio. Given these headphones are designed to be your go-to commuter pair, we hoped for more—but we’ll hold off judgment for a full review. They’re functional, too, and if you don’t care about sonic subtleties—and many don’t—they’ll be fine.