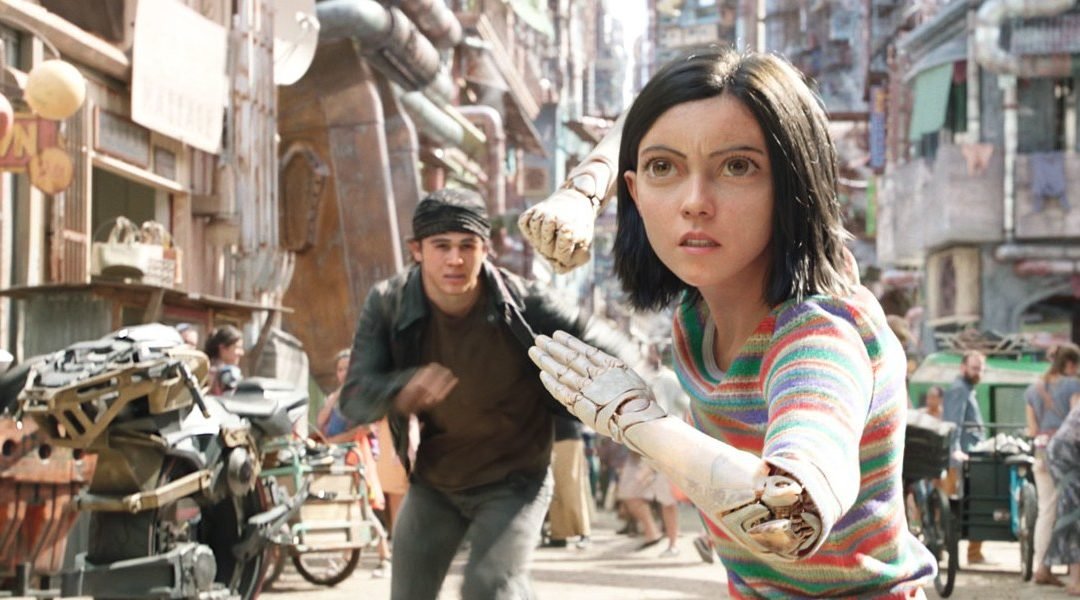 I’m going to go ahead and spoil Alita: Battle Angel for you. Not because I’m a dick, but because revealing the ending tells you nothing about the plot and will ruin absolutely nothing about the film. It ends—drum roll, please—with Alita (Rosa Salazar), sword in hand, staring down her foe, her Big Bad. Then it cuts to black and the credits play. The whole movie is a setup for a punch line that never comes.

None of this is to say that the setup is bad. In fact, it’s a lot better than anyone, myself included, imagined it would be. Based on Yukito Kishiro’s Gunnm manga series and directed by Robert Rodriguez, it’s a zippy, if corny, hero story about a young cyborg (Alita) who is assembled from the head and shoulders of a long-lost robot and the mechanized hands and feet of the dead daughter of gifted cybersurgeon Dyson Ido (Christoph Waltz). As the amnesiac android tries to piece together her life and limbs, she discovers extraordinary abilities, develops a love for the roller derby-cum-basketball sport known as Motorball, takes on bounty hunters, and realizes she must defeat the aforementioned Big Bad. (She also falls in love, because some tropes never die.) This is the whole movie. It’s a lot of fun, but it’s trying so hard to turn into a franchise it forgets to have an ending.

When Alita first wakes up, freshly hacked together by Ido, she has no memory of her past. She walks agog through the world Ido has brought her into, those giant eyeballs you’ve heard so much about drinking in everything. Yet when she meets Hugo (Keean Johnson), who introduces her to Motorball, the newborn cyborg discovers she has uncanny skills. Turns out, her heart and brain are Martian technology. Three hundred years before Ido made Alita there was the Fall, a great war with Mars that left cyborgs like Alita discarded and that left the great city of Zalem floating high above Iron City, where Alita, Ido, Hugo, and nearly everyone else lives.

There is one way to get to Zalem—by winning Motorball. Champions get to ascend. This becomes Alita’s goal. It’s also Hugo’s goal, but his plan is to get to Zalem with the help of Vector (Mahershala Ali), a mob boss of sorts who runs Motorball and pays Hugo and his friends to steal robotic appendages to give to players. Oh, also, Vector’s girlfriend/partner in crime is Chiren (Jennifer Connelly), who happens to be Ido’s ex-wife and the mother of the girl whose body Alita now uses. And they’ve been instructed by Nova, that Big Bad, to kill Alita.

If all of this sounds overly complicated, it is. Whereas most movies of its ilk are low on details and just stick to playing the hits, Alita is rife with intrigue and plot. The problem is, it doesn’t really go anywhere. The action-filled, eye-popping set pieces are incredibly fun (thank the merging of Rodriguez and producer James Cameron for that), but they’re a bridge to nowhere. Alita, it becomes painfully obvious in the third act, is an entire movie of exposition.

When trilogies are planned to be trilogies from the beginning, this is acceptable. Folks leaving the theater know there will be more to come back to in the next film. Even something like a Marvel franchise film can be forgiven for having a slightly open-ended conclusion, because everyone is aware the answers will be provided eventually. With Alita, there’s no guarantee of a sequel. In fact, Cameron has said he’s wary of scheduling one before this movie has proven itself. That’s a good idea, but it would be more believable if it wasn’t coming from someone whose movie forgot to include the final boss fight. And really, Cameron knows how to do this: Avatar ended with a bang and still left audiences wanting more.

Cameron and Rodriguez do, of course, have a plan for what would happen in a sequel—if they didn’t, man that would be an extra bummer—and it’s clear from Battle Angel they know where the story is going. So why, then, did they make a movie so clearly begging for a follow-up when they had the goods to deliver a killer ending? Dunno. (Ill-informed guess: Cameron, whose now working on four Avatar sequels 10 years after the original hit theaters, didn’t want to be caught flat-footed, despite what he says about not wanting to greenlight a second movie too soon.) Regardless, it’s a shame, especially considering the movie is on track to flop—and may never get that sequel anyway.