‘The Internet Remains Undefeated’ Must Be Defeated 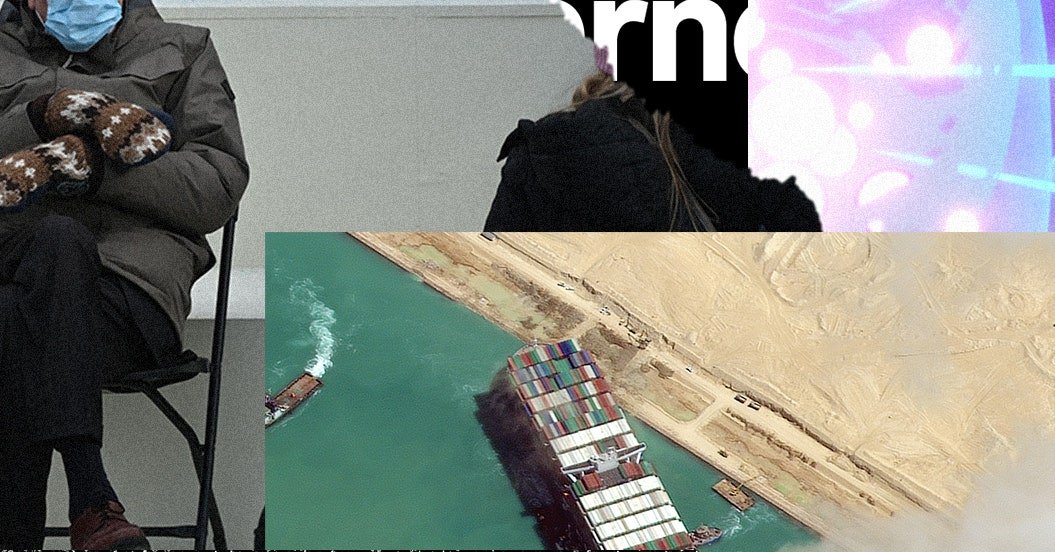 The big boat stuck in the Suez Canal, Oprah waving off Meghan and Harry with her “Stop it” hands, all the Teletubbies boinking one another blue as the sun baby watches approvingly, a photo bashing trans athletes shared by Donald Trump Jr. These memes are unified not only in encapsulating the lunacy of 2021, but in the four words that have consistently appeared beside them and countless others, in captions as well as comments: “The internet remains undefeated.”

Surely you’ve seen these words, but maybe you haven’t read them. (Congratulations on your sanity.) An apolitical, amoral stand-in equally for lol, fuck you, and thank you, used for both schadenfreude and firgun, “The internet remains undefeated” is the internet of phrases about the internet, existing everywhere and nowhere, meaning everything and nothing. A seemingly benign expression—until you say it back.

The more I encounter these words, the more they pierce me with mortal dread. It’s not just the rotten onion of their ambiguity: When did the internet’s winning streak begin? What, or who, is it undefeated against? Ourselves, maybe. But then why are so many of us so jubilant about reminding ourselves that we’ve defeated ourselves? And what would, could, should defeating the internet look like? But my disdain for the saying is also because of its underlying sentiment. The true terror of “The internet remains undefeated” is that it’s most often used in lighthearted contexts, yet exposes the deepest darkness of our lives online, a darkness that we’ve become either blind to or numb to.

Searches on the term “undefeated internet” suggest that the oldest extant usage of the ghastly phrase might belong to Timothy Hall (@peoplescrtic), a film critic and meme lord from Seattle. On the morning of August 12, 2013, he posted on Instagram a meme of a scowling Russell Westbrook, the mercurial NBA dynamo, photoshopped into a character selection screen from the arcade classic Mortal Combat, with the caption “The internet remains undefeated.” It’s a textbook usage, the kind Hall says he’s been deploying on social media and in group chats in the years since. To him, the saying epitomizes the internet as the world’s great equalizer. “You can be POTUS,” he says, “or you can be a soccer mom yelling at a game, not knowing you’re being filmed. Everyone is fair game to become a meme. Maybe it’s POTUS who makes you into a meme, or maybe it’s my 14-year-old nephew. You may not know it’s your day, you just have to ride the wave and let the internet defeat you until it’s someone else’s turn.”

But Hall can’t take credit for coining the phrase; he says he must’ve picked it up from someone on the internet along the way. “If someone ever claimed to have invented it,” he adds, “the internet would defeat them. That’s the beauty of it.”

To a wide-ranging group of social media users like Hall, “The internet remains undefeated” is, on its face, a simple expression of joy, or nostalgia for a more joyous era of the internet. Ryan Milner, a professor of internet culture at the College of Charleston and author of The World Made Meme, says the phrase harkens back to a time, between roughly 2003 and 2013, when the internet was “still kind of this other place that didn’t operate by and could maybe transcend real-world rules.” This was the heyday of early YouTube and message boards like Something Awful, 4chan, and Reddit, “when you saw a flurry of subcultural activity and content creation that became kind of a tone setter for people who are still extremely online.” So in 2021, people comment “The internet remains undefeated” to a flourishing of memes about Bernie Sanders and his mittens or the discord between your fall plans and the Delta variant, because it recalls when life online seemed less about livestreamed mass murders and the algorithmically driven death of democracy and more about rickrolling and lolcats. At the surface level, says Milner, the phrase “is a way to kind of appreciate when the early spirit of collective creativity online resurfaces.”