The Office Is an Efficiency Trap 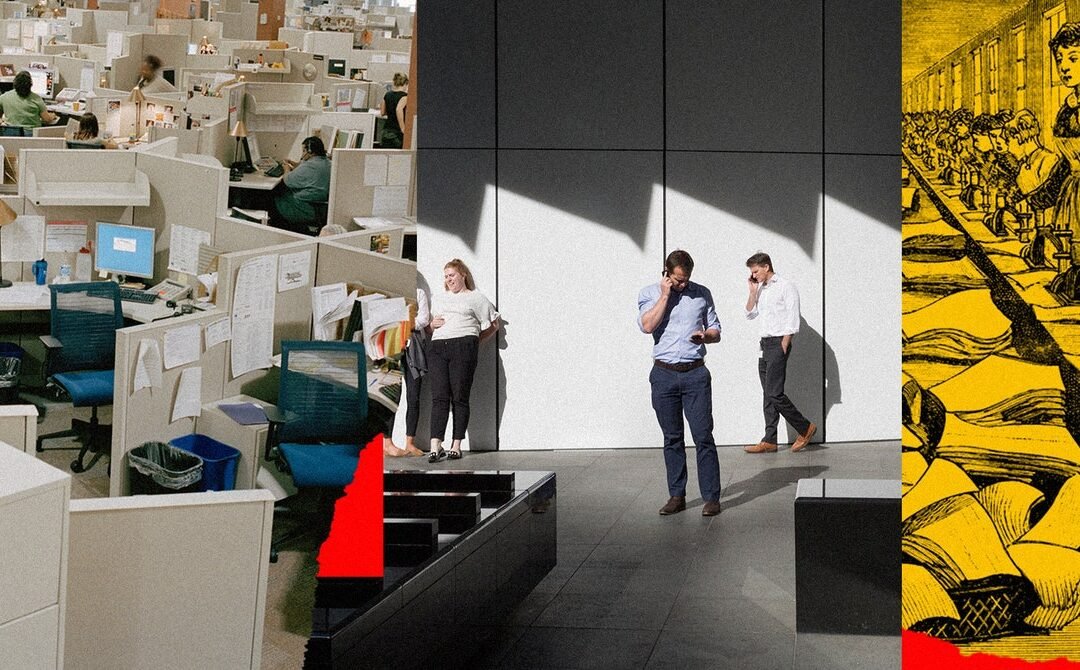 “It blew my mind,” he told us. “And it made our team realize that the planning of the office was fundamentally flawed.” His realization was straightforward: Office design had long revolved around the placement of desks and offices, with the spaces in between those areas treated as corridors and aisles. But that “overemphasis on the desk,” as Wilkinson recalled, “had worked to the detriment of working life, trapping us in this rigid formality.”

And so he set out to liberate it, shifting the focus of his designs to work that took place away from the desk. In practice, this meant designing bleachers and nooks in places that were once poorly lit corridors, and spacing out desk clusters to incentivize more movement among teams. A kinetic office environment, the idea went, could increase spontaneous encounters, which would then spark creativity. The design also allowed for private areas—many with comfy couches and plush ottomans to replicate a family room feel—to do deep work, away from the noisy bullpen of desks.

Google’s founders, Larry Page and Sergey Brin, were especially fascinated with this new brand of office. In early meetings, Wilkinson recalls, the pair’s ideas for design were heavily influenced by their time at Stanford, where engineers tended to gather in small groups and often flocked to far-flung enclaves of the campus for coding binges and study groups. They wanted to merge the traditional office with the university environment, creating a space that would incentivize both collaborative and self-directed work. Wilkinson thus developed a design whose unifying goal—like that of a college campus—was self-sufficiency. That meant flexible work spaces, designed to accommodate constantly shifting teams and new projects, but it also meant abundant green spaces, mini libraries, social hubs, and “tech talk zones,” which Wilkinson later described as “areas along public routes … where almost continuous seminars and knowledge-sharing events would take place.”

In service of this continuous knowledge sharing, the Googleplex was outfitted with a staggering array of amenities. Volleyball courts, valets, organic gardens, tennis courts, and soccer fields dot the campus, which also includes a private park for exclusive Google use. Inside the Googleplex, workers have access to multiple fitness centers and massage rooms, as well as multiple cafés, cafeterias, and self-service kitchens. Unlike traditional company cafeterias, where food items are often gently subsidized, everything at Google is free. In 2011, when the company had around 32,000 employees, the food service budget was estimated at around $72 million per year. Since then, Google’s workforce has more than quadrupled.

“Making the work environment more residential and domestic is, I think, dangerous.”

In Wilkinson’s recounting, the Googleplex design was meant to allow for “all of your basic work-life needs” to be met within a contained space. As he saw it then, supporting workers with generative, social environments—plus significant perks, like meals and wellness services—was a means to foster true community and sustained creativity. More important, it was a humane, considerate way for companies to treat employees who were working long hours and building products designed to change the world.

Reflecting today, Wilkinson is less sure of that vision. Over the past two decades, his brilliant, innovative designs have rippled through the architecture world, as large-scale tech companies and smaller startups alike have cribbed elements of his team’s dynamic workplaces for their spaces. And Wilkinson is increasingly aware of the insidious nature of those same perks. “Making the work environment more residential and domestic is, I think, dangerous,” he told us in late 2020. “It’s clever, seductive, and dangerous. It’s pandering to employees by saying we’ll give you everything you like, as if this was your home, and the danger is that it blurs the difference between home and office.”