The Physics of Falling Magnets in *Stranger Things* Season 3 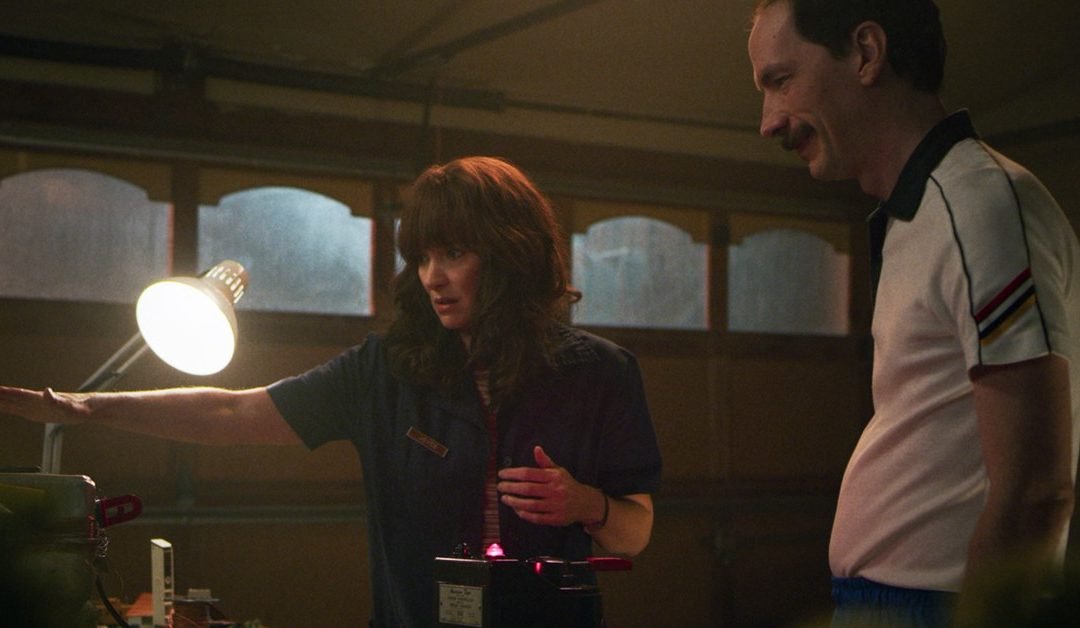 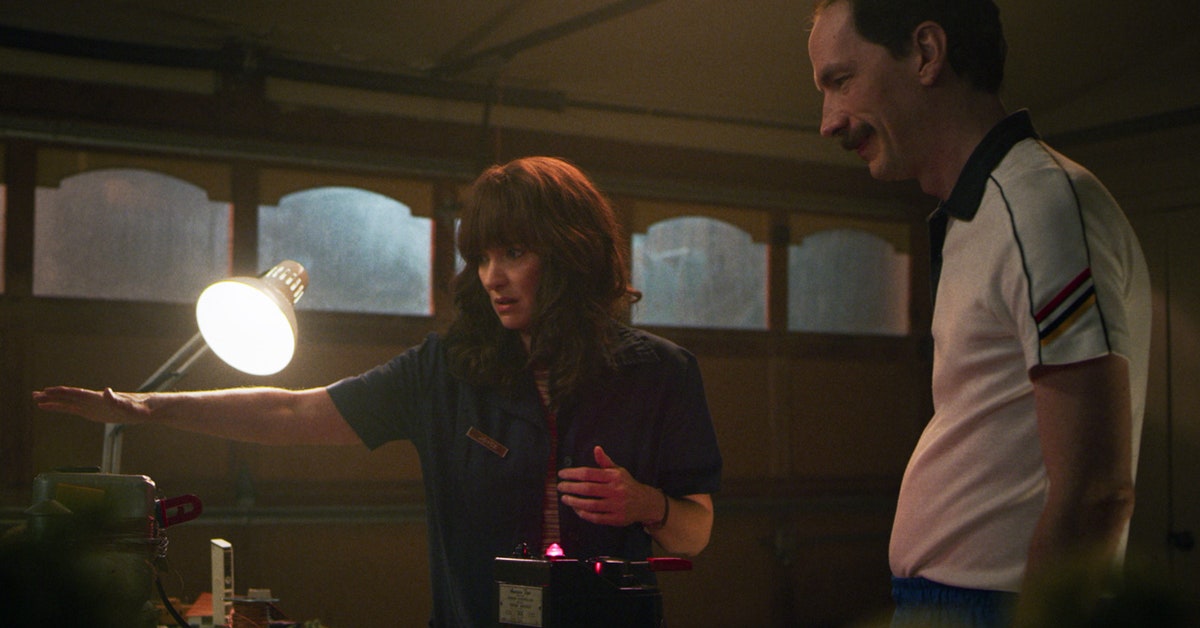 I think we need to have a talk about magnets in Stranger Things. Oh, you haven’t finished Season 3 yet? Don’t worry, this isn’t a huge plot element, but it’s still technically a spoiler. Just wanted to warn you.

Let’s review the magnet parts of the plot. First, Joyce Byers (Winona Ryder) notices that her fridge magnets stop working and fall to the floor. This seems odd, so she decides to do some light reading of some advanced physics textbooks that she’d checked out of the library. Second, she stops by the house of the local science teacher, Scott Clarke (Randy Havens). They have the following interaction. Yes, I transcribed it—just for you.

Joyce: What is this again?

Scott: This is a solenoid. It’s a coil wrapped around a metallic core and when electricity passes through it…

Joyce: It creates an electromagnetic field.

Scott: Exactamundo. Now for the fun part. Shall we?

Joyce: Yeah. [Scott turns on the solenoid] I … I don’t see anything.

Scott: Nope. You can’t see it, but it’s there, I assure you. Our very own Clark-Byers Electromagnetic Field. Pretty neato, huh?

Scott: And this field affects any charged object in its vicinity.

Joyce: OK, Why is nothing happening?

Scott: Oh, because our field is stable. But, if we reduce the current… [Scott turns off the current and the magnets fall off.]

Scott: The magnetic dipoles tried to orient according to the field, but—

Joyce: No, no, no. I mean how is this happening at my house?

Later: Scott: Theoretically speaking, I suppose some large version of this AC transformer could exist. A machine of some kind. But, in order to reach your house and downtown, gosh, that would take billions of volts of electricity and would cost tens of millions of dollars.

I know you have many questions. So, let’s get to it.

What is a solenoid?

We are going to start with the simple stuff. Like Scott said, it’s basically a coil of wire. If you add a solid ferromagnetic core (like iron), it will make a stronger magnetic field. I’m not too sure other metals will help that much. But you don’t even need a solid core. It works with just air in the middle. The basic idea is that an electric current makes a magnetic field. If you wrap a wire into a single loop, the magnetic field from all the sides of the loop mostly align in the same direction to create a stronger field inside the loop. More loops (as in a solenoid) mean a greater magnetic field.

Oh, it looks like Scott wrapped the wire around something like a metal lunchbox. That’s cool and everything (looks very MacGyver-like), but it has to have a solid metal core and not be hollow to have a significant influence on the magnetic field. One more thing.

Does a solenoid create an electromagnetic field?

Does a solenoid affect any charged object?

This is heading down a dark path (dark in knowledge). Remember, Joyce and Scott are talking about magnets. When he mentions charged particles, I get scared. I’m afraid he is confusing magnets with charged particles. They are indeed different. But let’s move on.

If you have a solenoid that makes a constant magnetic field, does it interact with any charged object? Nope. There is only an interaction between a constant magnetic field and a MOVING charged particle. Right there, that makes Scott’s statement mostly not true. But what about a solenoid with a changing magnetic field and a changing electric field. Then yes, this would interact with any charged particle. However, the interaction is super weak—it’s such a tiny interaction that you would probably never notice it.

When did “Exactamundo” become a thing and when did that stop?

Is “exactamundo” an ’80s phrase? OK, I just looked it up. It seems like this word became popular from Happy Days, as it was used by the Fonz. I wonder if this word will make a comeback.

Can you demagnetize a magnet?

Now we are getting to the real question at the heart of this matter. Joyce is trying to solve a mystery—the mystery of the falling magnets. So, is this even possible? Can you make a magnet a non-magnet? The answer is yes, at least sometimes.

But how do you go from magnetized to unmagnetized? The short answer is that you need to “shake up” these domains. There are multiple ways to accomplish this “shake up.” You could take the nail and get it hot—very hot. In a hot nail, thermal oscillations make the domains unstable. When you let the nail cool down, they will end up in a random pattern with very little magnetic field. You could also randomize the domains by hitting the nail. Yes, if you hit it with a hammer you can also get the domains to shift into a random pattern.

However, in order for a solenoid to demagnetize a magnet you need two things. First, you need a magnet with deformable domains—like iron or steel. This won’t work with one of those fancy neodymium magnets. It won’t work with those ceramic magnets either. Second, you need a strong magnetic field. That means you have to be pretty close to the solenoid for this to work. If you want to increase the range, you would need to increase the current—but yes, it’s theoretically possible at least at some level.

Actually, you can probably measure magnetic field strengths with your phone. I used phyphox on my phone along with my large solenoid to demagnetize some nails. With this, I found the magnetic field dropped from 4 milliTesla to approximately zero in just 20 centimeters. If you want a sizable field that reaches all the way across a small town, you are going to need crazy high electric currents.

What do billions of volts of electricity look like?

Scott Clarke didn’t say you would need crazy high electric currents, he said “billions of volts of electricity.” What does that mean? Well, if he is talking about an electric potential difference of 1 billion volts, that’s quite large, but not impossible. You can get very high electric potentials just by rubbing your feet on the floor and building up a static electric charge. When you see that tiny spark in the air from the electric discharge, that has to have a voltage of 3 million volts per meter. That means that a tiny spark of just 1 millimeter would be 3,000 volts. If you want 1 billion volts, that would be sort of huge—a spark about 1,000 meters long.

However, the main point is that voltage isn’t electric current and voltages don’t make magnetic fields without electric currents. If Mr. Clarke wanted to describe an enormous solenoid he should probably use units of watts. A watt is a unit of power, but it’s also the product of the voltage and current of an electric circuit. If he had said it would take billions of watts, that would make more sense. What if he said 1.21 “jiga” watts? That would be funny.

Is this a bug or a feature?

Now for the real question. Were Scott Clarke’s mistakes part of the plot or an error? Was he supposed to be giving out some BS science explanations just to get Joyce to chill out? If that’s the case, I’m cool with that. I mean, Scott’s just a normal human after all. We all make mistakes. We think we understand something but then crazy stuff comes out of our mouths when we try to explain it. That happens.

The other option is that the Stranger Things writers wanted Scott to throw down some serious science. If that’s the case, they failed. Oh, don’t worry. It’s still a great show. In fact, I don’t even mind that there are some scientific errors. It’s a science fiction show and not a documentary on electromagnetic fields.

But there is one thing that bothers me. In Stranger Things Season 1, there is a scene where the kids make a sensory deprivation tank by adding salt to water so that someone floats. The calculations were surprisingly accurate (I go over all the details in this older post). It seems clear that someone over there knows some science. Maybe it was a science advisor or just well-versed writers. So, why the big error in this season? It must be part of the plot.

Oh, but if it’s not an intentional mistake—I’m here if you need help. Call me.