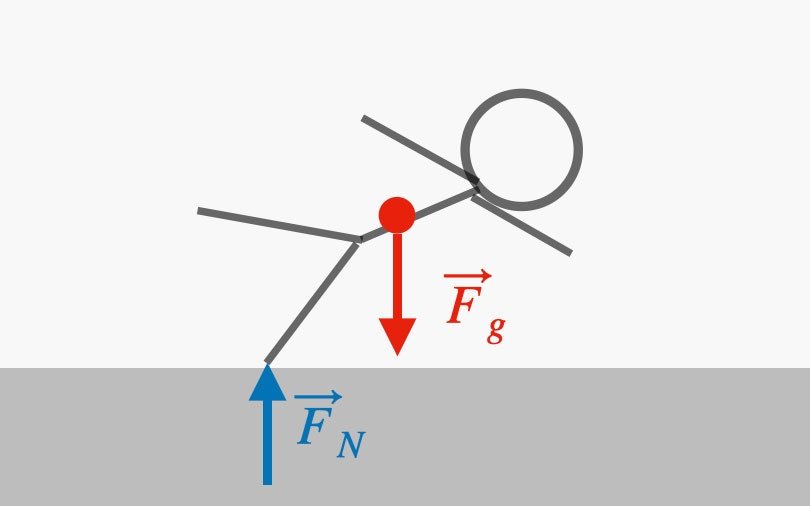 Great, now let’s use these same ideas to show why you can’t hug someone while leaning super far back (unless you are on an awesome rotating platform). Actually, just to make things easier I am going to draw the forces on a single human that is just doing a super lean back.

Even if these two forces (gravitational and normal) have the same magnitudes, the total torque will not be zero. Using the foot contact as the point of rotation, the normal force has zero torque (torque arm of zero), but the gravitational force does indeed have a non-zero torque. The total torque will cause this happy leaning human to tip over and hit the ground. Now a sad human. Sad human on the ground.

Then what the heck keeps these dancers from falling over? The answer is a fake force. Yes, a force that isn’t actually a force but instead a fake force. Oh, you’ve never heard of a fake force? Well, maybe that’s true, but I’m sure you have felt a fake force.

Imagine the following situation. You are sitting in your car at a red light (the car isn’t moving). At this moment, there are just two forces acting on you. There is the downward pulling gravitational force and the upward force from the seat. Since you aren’t accelerating, these two forces have equal and opposite magnitudes.

Oh, but wait! There is this goofy looking car in the lane next to you. The light turns green, so you hit the gas and accelerate (safely and within the posted speed limits of course). What happens next? You feel it, right? There is some force pushing you back into your seat as you accelerate. It feels like the “weight of the acceleration” or something, right? This is actually Einstein’s equivalence principle. It states that you can’t tell the difference between an acceleration and a gravitational force. So, in a sense this force you feel is as real as gravity—as far as you can tell.