The Uncanny Escapism of ‘Flight Simulator 2020’ 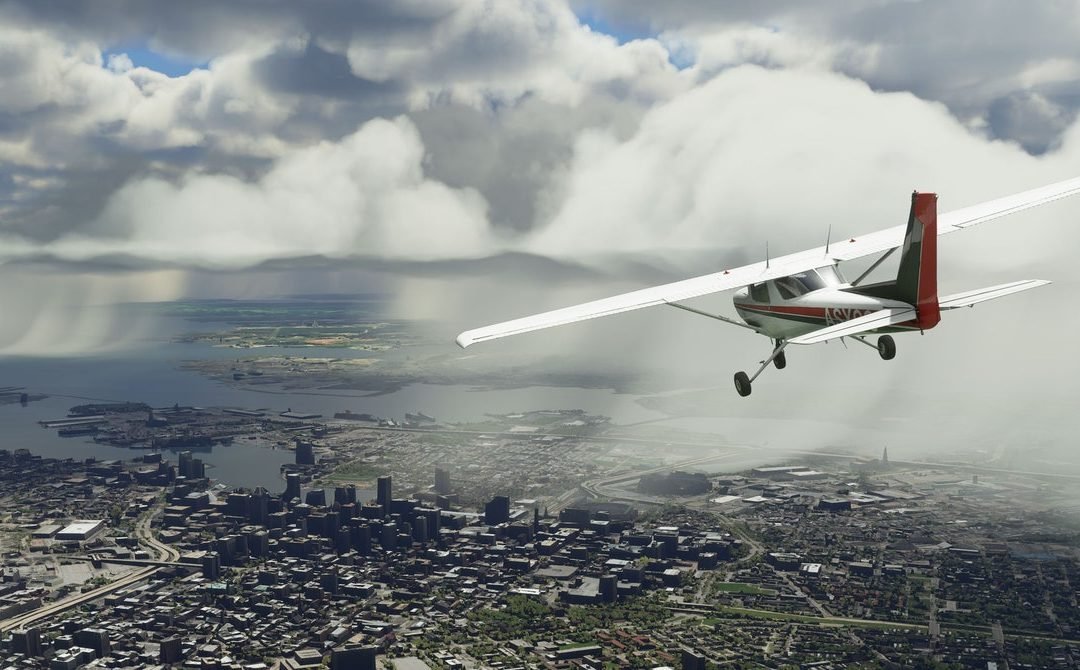 From a couple thousand feet up in Microsoft’s new Flight Simulator 2020, real-world mapping data from Bing Maps unfurls from the horizon. Giza’s pyramids are hourglass piles of sand. Hong Kong is a strip of urbanity snaking around the coast. A baseball field outside Yokohama, Japan, forms a chalk pastel smudge. As I fly, my computer siphons 3D mapping data from the cloud and renders it with stunning precision, but I found I needed these metaphors to really engage.

There’s been a 14-year gap between Flight Simulator X, the series’ previous entry, and Flight Simulator 2020. Flight Simulator X mapped the positions of the stars and most major landmarks, which players could explore in anything from a glider to a 747. Flight Simulator 2020, though, encompasses the entirety of Earth—from mundane suburbs to Jeffrey Epstein’s private island—like a $60 snow globe. In a pitch for mainstream appeal, it takes its cues less from the hardcore, low-poly sims aspiring pilots spend months mastering than from a bit of demo software called HoloTour made for Microsoft’s augmented reality headset.

“I remember the first time I put on the headset, the sights and sounds were so real,” Flight Simulator 2020 lead Jorg Neumann told the Verge. “I mean, I’ve never been to Peru, but it was real to me. And even then, in early 2016 or something, I just thought to myself, ‘Man, if we could just do this across the entire planet, wouldn’t that be something?’”

It is something. Flight Simulator 2020 is a tourism game that comprises both maneuvering a virtual plane and a detail-rich platform for escapism. It certainly came at the right time. According to the United Nations World Tourism Organization, 100 percent of global travel destinations had some sort of restriction in place as of April. Italy, Japan, and Spain are among the dozens of countries that have barred US tourists from entry. For the most part, the architecture I see is limited to my neighborhood, mediated by a face mask.

Flight Simulator 2020 is positioned to fill that void, at least a little. Yet lifting off from Tokyo’s Narita International Airport—where I would have landed later this year had things been different—I felt nothing at all swooping down over the blocky sprawl. Even with an ergonomic joystick and throttle, piloting an airplane in Flight Simulator 2020 is like floating an eyeball around Google Earth. I am beginning to wonder what it would take to approach “immersion,” a term so often equated with fidelity to life. Wood-panel textures? Kanji text on backlit billboards? A higher-end gaming PC?

It’s certainly not lack of data. Mapping tools like Bing’s and Google Earth have long offered enough fidelity that an artist can rely on them to capture far-flung city scenes. My childhood friend Ellie Doughty, an “urban illustrator,” is one of them. In her senior year of college, Ellie escaped suburban Virginia and traveled to Germany and Austria, where she parked in front of whichever old buildings inspired her, painting their little attic windows and roof trimmings. Back home, to capture that feeling of serendipity, Ellie’s art practice shifted to hitting “random” on Google Street View. Whatever surprised her, she drew. “Obviously it’s pretty different,” she says. “It’s flat. It’s not alive like the city. It’s the next best thing, though.”

In quarantine, Ellie has been teaching a remote urban sketching class over Zoom using Google Street View. The students drew cinderblock structures in Puebla, Mexico; a quaint church in the Czech Republic. “It’s easier to draw because things are flattened out already,” she says. “Street View omits lots of details that might be interesting IRL, but not ultimately important to capturing the whole scene.”