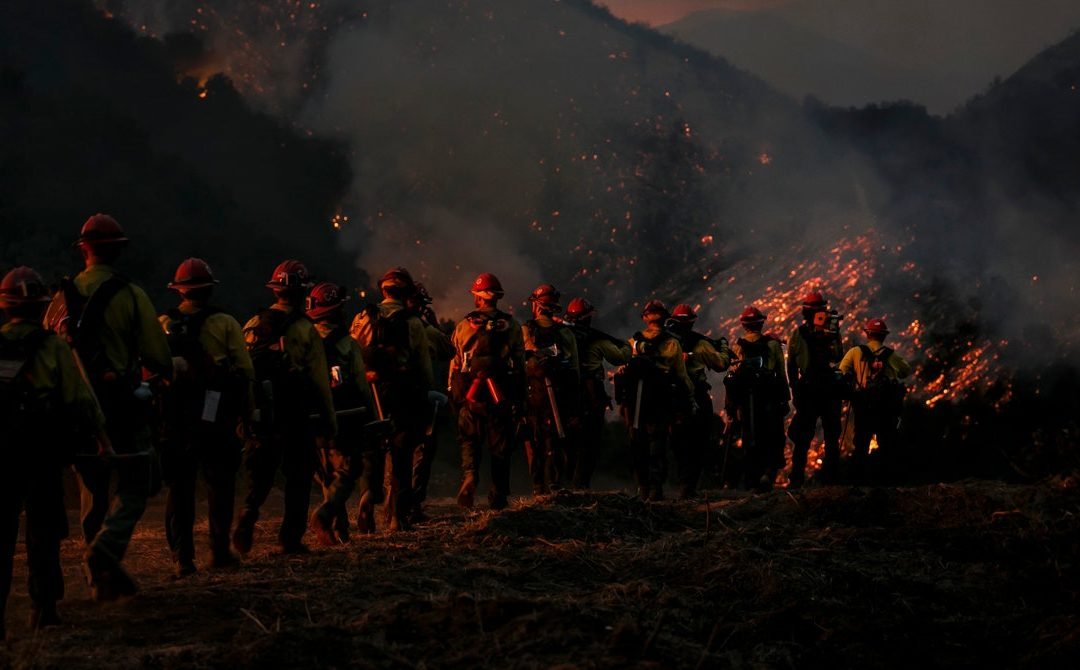 The key ingredient in a firestorm, whether in a wartime bombing campaign, a plume-driven fire like the Carr, or a wind-driven fire like the one that destroyed Paradise, appears to be the simultaneous burning of many small fires in a combination of light and heavy fuels over a large area with light ambient wind. As that broad area continues to burn with glowing and smoldering embers over many hours, the separate convective columns of all those many little fires begin to join into a single, giant plume. As the hot air in that plume rises, something has to replace the air at its base—more air, that is, sucked in from all directions. This can create a 360-degree field of wind howling directly into the blaze with the same effect as vents on a forge, oxygenating the fire and pushing temperatures high enough to flip even heavy fuels (giant construction timbers, mature trees) into full-blown flaming combustion. Those heavy fuels then pump still more heat into the convective column, creating a feedback loop: The column rises ever faster and sucks in more wind, as if the fire has found a way to stoke itself.

The project not only produced small tornadoes; it confirmed that mass fires of wildland fuel burn in ways remarkably similar to the firestorms of World War II.

That seems to be what happened during the Carr Fire. According to Neil Lareau, an atmospheric physicist at the University of Nevada, a weather balloon released on the morning of July 26 detected a lid of warm air, known as an inversion layer, several thousand feet above the Sacramento Valley.

While Knapp settled into work at his office, this inversion layer trapped the Carr Fire’s heat plume near the ground. But as the day wore on, the heat plume forced its way to higher altitudes, steadily cooling.

About the time Knapp jogged out to the river to get a view of the fire, this plume reached 18,000 feet, high enough for water vapor, carried aloft, to condense into liquid cloud droplets, spawning a pyrocumulonimbus, or fire-generated rotating thundercloud. That process of condensing hot vapor or steam into liquid releases heat; you can think of it as the inverse of the cooling effect caused by evaporation, like we’ve all felt emerging from a swimming pool into wind. In the case of the fire plume, this condensation of water vapor into liquid cloud droplets delivers new heat to the plume itself, causing it to rise even faster and higher.

Back down at ground level, meanwhile, the rising plume pulled in new air by sucking at those two pre­existing wind fields, the ones that Knapp noticed blowing into the fire, out of the south and northwest, respectively. Blowing toward one another at an askew angle and intersecting at the flame front, those two winds wrapped around each other and drew in flame to create a whirling vortex of fire. The higher the plume rose, the faster the vortex spun. Lareau likened it to a figure skater: “The skater starts a slow rotation with their arms out wide, and they draw their arms inward and maybe put them up over their head, and they suddenly start rotating very, very quickly.”

As the fire tornado splintered homes and launched flaming debris into the sky over Knapp, it set up one of the most dangerous of plume-driven phenomena—the raining of firebrands. A classic surface-driven wildfire ignites only the immediate area crossed by the fire’s own shallow flame front; falling firebrands, by contrast, allow plume-driven fires to propagate miles from the core burn, as if launching incendiary bombs to ignite entirely new mass fires like the one that burst up around Knapp.

“If you roll a map of California out, I can give you 150 communities that have exactly the same combination of factors as Paradise.”

Fires of this type can be nearly impossible to suppress, because they can move too quickly for firefighters to get out of harm’s way and burn too hot to extinguish, but also because so many people in the West have settled in places where these fires are increasingly occurring—the wildland urban interface, or WUI (pronounced woo-ee), exurban sprawl in California’s many mountain ranges.

“We have crammed millions and millions of people and roads and homes and yards into this highly volatile Mediterranean climate,” says CalFire chief Estes, who grew up in the town of Paradise. Worse, Estes says, enormous numbers of these people have gravitated to quaint old Gold Rush towns that, like Paradise, happen to sit atop river and creek drainages where wildfire fuel accumulates and winds tend to blow especially hard.