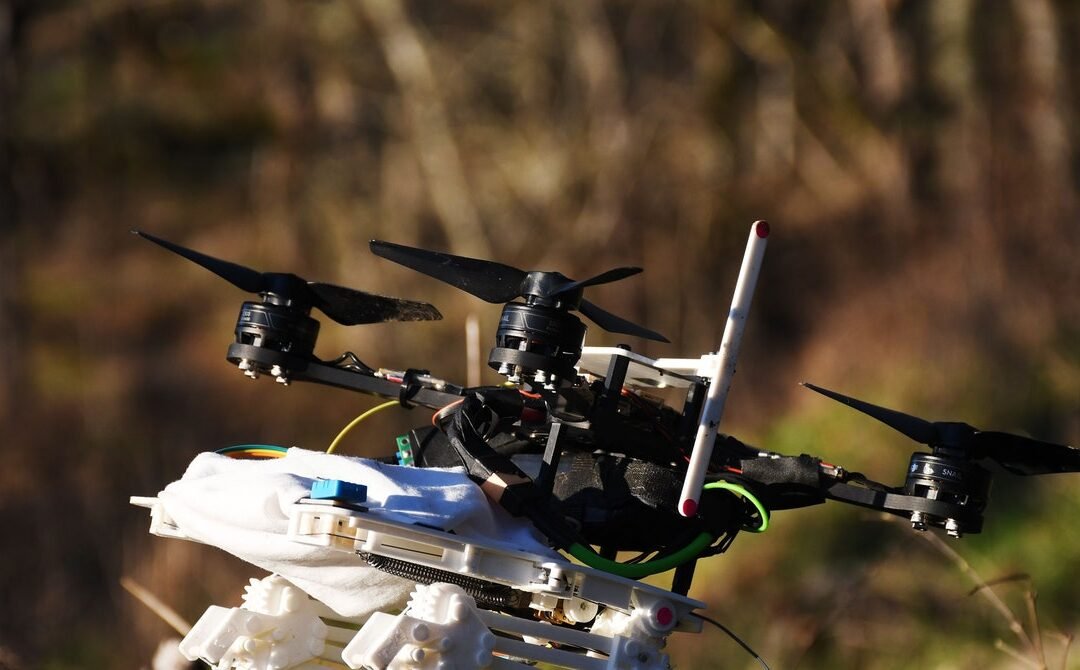 Quadcopters these days are so precious. They take off and hover, taking pictures or whatever, and then land, recharge—and blah. If these drones were birds, they’d be prey. But the Stereotyped Nature-Inspired Aerial Grasper, or SNAG, would be their apex predator. This new quadcopter has legs, each loaded with four 3D-printed talons that lock around whatever makes contact with them, be it a branch to rest on or perhaps, someday, other drones flying where they’re not supposed to. That’s right, it’s a drone that might hunt drones.

Over the years, quadcopters have mastered the skies, but not so much the landing: A drone is liable to tip over and bork its rotors on a moderately uneven surface. Birds, by contrast, can wrap their feet around just about anything, getting a grip with their toe pads and talons, which get a purchase on the roughness of a branch. “Everything is a landing strip for a bird,” says David Lentink, a biologist and roboticist at the University of Groningen in the Netherlands, coauthor on a new paper describing the robot in the journal Science Robotics. “To us, this is really inspiring: The whole idea that if you would just design different landing gear, you might be able to perch just anywhere.”

SNAG is specifically inspired by the peregrine falcon, a predator among predators. This raptor dive-bombs at speeds up to 200 miles per hour, slamming into other birds in midair and sinking its talons into their flesh. It’s the fastest animal on earth and an absolute menace in the sky.

At 1.5 pounds, SNAG is actually about the size of one, although it’s got no wings and considerably more rotors. When one of SNAG’s legs makes contact with a branch, it starts to collapse, folding like when you bend your knee. The impact causes a tendon in the leg to lengthen, pulling wires on the underside of each toe. The more the leg collapses, the more tension gathers in the tendon, until a quick-release mechanism triggers a spring to pull the tendons even tighter, drastically increasing the grasp force. Both the claws and toe pads, which are made of deformable rubber covered with grip tape, help SNAG hold tight.

Basically, the robot’s legs have converted the energy of its impact with the branch into grasping energy in just 50 milliseconds. “The robot has momentum—it’s not like a helicopter landing,” says Lentink. “It’s a dynamic landing, a controlled collision.” After landing, an accelerometer in SNAG’s right foot checks the robot’s balance, and motors in the hips correct its posture if necessary. To release the grip, another motor decreases the tension in the tendon. Because there’s elastic bands on the tops of the toes, the digits automatically curl back to the open position once this tension is released, allowing SNAG to fly away.

In this video, you can see the robot’s legs work to capture “prey,” the way a peregrine falcon might attack other birds from above. As the objects make contact with the feet, the energy of that impact converts into energy that the robot uses to clamp its claws.

And here’s takeoff in slow motion. SNAG relies on its rotors to produce lift, much like a hummingbird relies on the rapid flapping of its wings to take off. (A real peregrine falcon would actually flap and shove with its powerful legs to get off the ground.)

One of SNAG’s current limitations is that it isn’t autonomous. To do these experiments, a pilot had to remote-control the robot. But Lentink and his colleagues are working on a way for the robot to localize a branch, calculate how to approach it, and make the landing on its own.

SNAG isn’t the first quadcopter with legs. Caltech’s LEg ON Aerial Robotic DrOne (aka Leonardo), which debuted in 2019, has limbs for resting on the ground; it was designed to better explore Mars. Both SNAG and Leonardo are after the same thing, though: energy efficiency. Making a drone hover in place to monitor an area quickly drains the battery. (NASA has already sent a helicopter to Mars, but it doesn’t have legs, so its flight times are very short.)