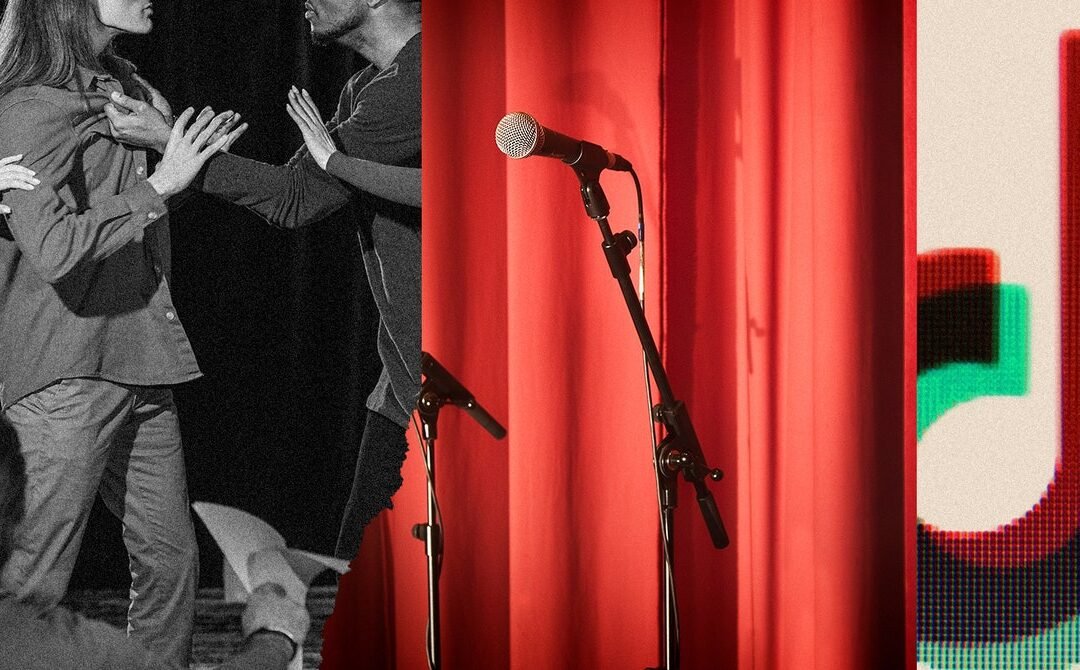 In the 2020 paper “TikTok and the ‘Algorithmized Self’” researchers argue the platform is different from other social networking sites (SNS) because it’s less about connecting with a network of friends and more “a site for public performance heavily built on intrapersonal engagement” while creating content for a trending algorithm. “While similarly egocentric and concerned with the performance and management of self-identity, TikTok rewrites the mechanisms of this process through a design that guides users in a different direction than other SNSs,” they write.

Essentially, it’s a digital sandbox that invites make-believe. “The unplanned back and forth motion between creators makes the app an incredibly social playground,” Kurzock writes. “TikTok users play and perform in simulated characters and settings … This video creation app is an escape from reality.”

And it’s an escape from reality when many of our typical opportunities for adult play—this is literally playing, using your free time to do something whimsical—are interrupted by the pandemic. In January 2018, TikTok had 55 million global users. As of September 2021, it had more than 1 billion. Its rise is in part because it’s entertaining, a more positive place than Facebook.

Because platforms present an opportunity for people to continuously figure out how they want to configure them, the exact use of TikTok is always shifting—and it can be many different things at the same time. What’s happening with a situation like West Elm Caleb is seemingly people using the platform to share with a microgroup (women in New York City who may have or may eventually date Caleb) and provide information like they would on other more intimate social networking sites, like Facebook. They aren’t making music-backed tracks with special effects like the TikToks evaluated by Kuzrock in his cinematic study. They’re making front-facing, confessional, and intimate videos.

But the introduced topic—West Elm Caleb—still becomes the subject of imaginative play. That part of TikTok still enters the chat. While Kuzrock’s study excluded front-facing confessionals, TikToks in this format still become cinematic by nature of the platform and how it encourages users. These videos are performance, too—only with higher stakes.

This is not to say TikToks should be confined to lip syncs but to acknowledge that, as one of the first posters of West Elm Caleb put it, “if you leave it up to the TikTok gods” you are actively participating in a system that supports mass participation and interpretation. The intimacy groomed through phrases like “it’s story time,” “bestie,” and “let’s get into it” is false. You’re providing material for a remix, even if that material is the personal details of your, or another’s, life. If you post, there’s the possibility—even inevitably—of mass participation.

This can be really fun, and it can also damage an individual. There’s a saying that every day there is one main character on the internet. The goal is to not become this person. Before he was West Elm Caleb this person was Caleb, someone who was seemingly a dick when it came to dating, but also whose photo is now spread without his consent and whose workplace is now barraged by mentions of the whole debacle. In the digital sandbox, you play—playing with the material, playing detective, playing the Paul Revere of the New York dating scene.

On Thursday, an ex of West Elm Caleb posted her own TikTok, criticizing how far people are taking the situation and saying “you need to remember that there are actually human beings behind your screen.” But TikTok is designed to capitalize on your attention, to entertain. This means transforming the real to the unreal at the pace the crowd demands and turning the private into performance.