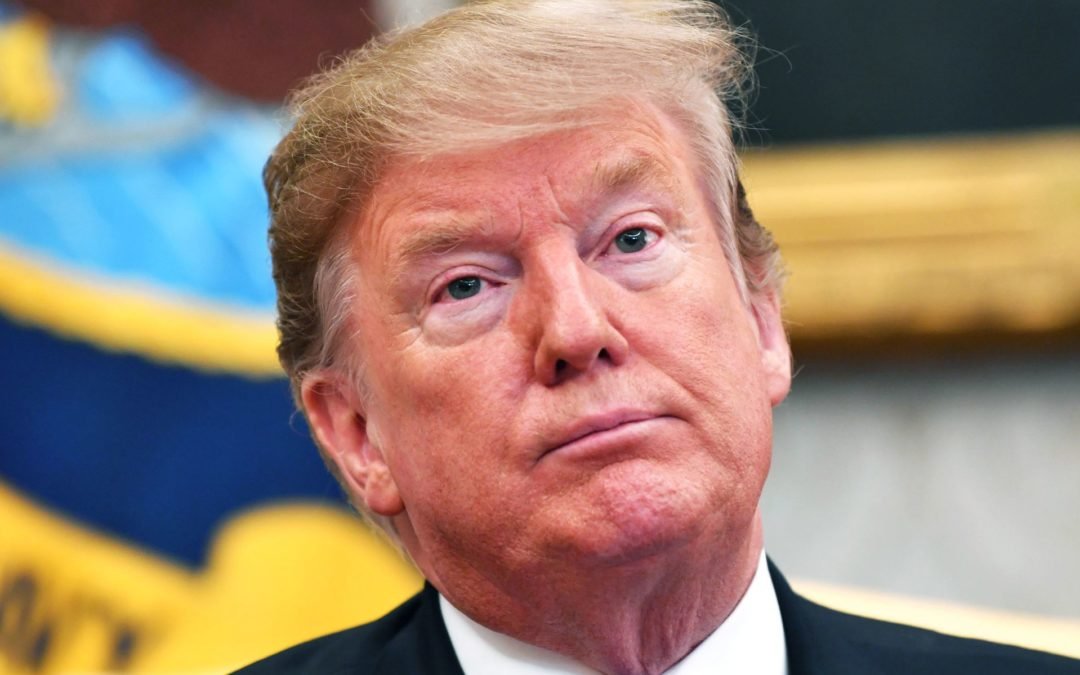 Even by 2019 standards, this last week has been a doozy; we’ve had police allege Empire actor Jussie Smollett faked his attack in an attempt to promote his career, a new election called in North Carolina, and another potential government revolt in the UK over Brexit, which has also resulted in the formation of a new political party. Oh, and the Trump administration did something genuinely good in announcing a campaign to fight anti-LGBTQ laws around the world, even if the president doesn’t actually seem to know such a thing exists. Oh, and Eminem is upset about the end of The Punisher, because that’s a thing, too. What is even happening?

What Happened: What does it take to unite the country? Based on the number of states coming together to push back on President Trump’s plan for border wall funding, the answer might be “the declaration of a national emergency.” Go figure.

What Really Happened: A little over a week ago, just as President Trump was signing a spending bill that would keep the government open, he declared a national emergency to fund his border wall. The Presidential Proclamation on Declaring a National Emergency takes around $3.6 billion in funds earmarked for military construction—as well as $600 million in asset forfeiture funds and around $2.5 billion drawn from Department of Defense funds aimed at drug interdiction—and adds it to the $1.375 billion Congress had included in the actual spending bill to build a wall along the US southern border wall almost all experts agree won’t actually work.

During the speech announcing the national emergency, Trump not only admitted he didn’t need to do it, but he predicted legal challenges to the declaration itself. Last week, those challenges got underway, with one lawsuit in particular catching a lot of people’s attention.

As if the idea of the state of California suing the president wasn’t eye-catching enough, it turned out that it wasn’t just California, in case the screenshot attached to that tweet didn’t make it clear enough. Lots of states were jumping on board this particular bandwagon.

Yes, 16 states are coming together to sue the president over this issue. Aside from the fact that, again, Trump said in his announcement “I don’t need to do this,” what else could the legal teams use to argue their case that this national emergency is anything but a national emergency?

Still, at least the people are on Trump’s side. Actually, never mind.

The Takeaway: And the hits keep coming, with a further lawsuit being announced by the county of El Paso, Texas even as of this writing. Remember the days when then-candidate Trump talked about so much winning? Who knew he was thinking about the number of lawsuits headed his way…

What Happened: A white nationalist was arrested and detained before he had the chance to carry out an alleged plan to kill several prominent Democrats and journalists. President Trump, meanwhile, seemed unavailable for comment on the matter.

What Really Happened: News broke midweek last week about the arrest of Christopher Paul Hasson, a US Coast Guard officer who had allegedly been planning a terrifying terrorist attack on domestic soil.

Initially, response to the story was muted and uncertain in tone. After all, his reported Google searches did make him seem like a joke—

—but the size of his weapons cache belied the humor considerably.

Hasson allegedly was plotting while at work, as well as contacting neo-Nazis and compiling literal hit lists.

Indeed, his politics were very visible for all to see, despite attempts by some on the right to argue otherwise.

Alongside the obvious horror and relief at this story, there were also a number of questions.

Well, let’s look into that last one a little, shall we?

After Hasson’s story broke, there was notable silence on the topic from a traditionally vocal source.

Indeed, more than a day after the news of Hasson’s arrest started making headlines, the president had yet to issue any statement on the matter, despite making a number of other statements via Twitter about a number of other topics, including complaining about Jussie Smollett’s allegedly faked attack. Apparently a supporter who was allegedly planning a terrorist attack isn’t important enough for him to care about? His silence was noticed.

The Takeaway: As the right continues to point to Smollett and bray loudly, their silence around Hasson becomes more and more breathtaking. This goes way beyond simple double standards, but, you know, that too.

The End in Sight

What Happened: After more than a year, are we actually getting close to the end of Special Counsel Robert Mueller’s investigation into the Trump campaign and potential wrongdoing? Reports last week suggested yes, but is that just wishful thinking?

What Really Happened: Over the past year or so, when things have gone quiet on the Mueller front, it’s been because something big was about to happen. Last week, perhaps the biggest thing of all was announced, to a lot of surprise.

Yes, the special counsel investigation may be nearing its end, according to certain sources, as surreal as that actually seems. Could that even be real, after all these months of excited anticipation? As of this writing, it’s still a pretty big unknown, but there are some small breadcrumbs to suggest that the investigation is indeed wrapping up.

Even the suggestion of the idea made plenty of people pretty nervous, for fairly obvious reasons.

Especially because it wasn’t initially clear whether or not Attorney General William Barr would share the special counsel report with members of Congress or the public. But that shouldn’t really come as a surprise.

For those wondering, yes, Congress is reportedly planning to subpoena the report if Barr decides not to release it voluntarily. Meanwhile, some were pretty happy with the way things seemed to be shaping up—but, admittedly, they weren’t big fans of the special counsel in the first place.

But again, what is really happening? That remains more than a little unclear.

As does the fact that, as many expect, the Mueller report is likely to be the end of the beginning, as opposed to the thing that brings the entire Russia matter to a close. Also still in the air, it seems, is the timing of any final report, according to subsequent reporting.

So, once again: What is happening? Your guess is as good as anyone’s, unless that someone is Robert Mueller.

The Takeaway: While we’re stewing in uncertainty, let’s enjoy the fact that Barr and Mueller are, according to reports, good friends.

What Happened: Apparently, some people don’t understand the concept of “actions have consequences” until the matter involves social media and implied threats against judges presiding over their cases.

What Really Happened: For those who wonder how seriously to take social media, may we present the example of Roger Stone. Last week, the Trump advisor, Nixon devotee, and self-proclaimed fashion icon posted a picture of the federal judge in charge of his case on Instagram with crosshairs next to her head and, as you might imagine, she didn’t like that and he quickly learned the consequences. Consequences like the judge demanding he return to court to talk about why he posted that image. Suffice to say, the stage was set for some wonderful times when Stone made that appearance on Thursday.

With multiple reporters in the courtroom live tweeting what was happening, it was easy to keep track of events, even if what was actually happening seemed more than slightly like a badly written sitcom.

The end result of the day’s events? We just might have heard the last from Roger Stone for a while.

If we take Stone at this word, and accept that all of this is a terrible misunderstanding brought about through ignorance instead of malice, then having these much firmer guidelines about what he can and cannot say should really ensure that he doesn’t make any similar “mistakes” in future, right?

The Takeaway: Yes, this checks out.

What Happened: Nothing says “election season is heating up” like the entry into the race of a man who is 11 years over the average retirement age for men in the United States. Although apparently a lot of people are willing to pay for this kind of presidential candidate.

What Really Happened: As unbelievable as it is to consider, we’re already deep in the 2020 election cycle as more and more Democrats announce their candidacies. We’ve already had Kamala Harris, Elizabeth Warren, Cory Booker, Amy Kobuchar, and Julián Castro announce their intentions, and each one brings something different to the table—namely, not being a straight white man. Which means that there’s still a space for the change America, uh, checks notes “needs”: Another old white man wants to be president.

Yes, it is happening again: Everyone’s favorite bird-loving curmudgeonly candidate from 2016 is back for a second go-around. But this time he’s surrounded by a far more diverse field than Hillary Clinton and compatriots provided last time. For those wondering how a 77-year-old white man can seem like the future of America in comparison to the other candidates, fear not: Bernie has an argument … against hoping for more inclusivity by asking people not to judge people on their gender or skin color?

I mean, I guess that’s a look? To be fair, his team is far more diverse than it was last time.

Indeed, he really appears to have learned some lessons from his last effort. So, what does the Sanders campaign stand for this time?

Many are already talking about his foreign policy as one of the most important ways in which his campaign stands out from the crowd, but that’s not the only thing that he has going for him. After all, Sanders 2020 is certainly a campaign that is taking advantage of its experience—and, one suspects, its mailing list—from the 2016 run.

Yes, the Sanders campaign turns out to be very good at raising money from supporters. Is that a big deal? Without a doubt, yes.

There’s still almost a year until the first actual primary (that would be February 3’s Iowa caucus, as it currently stands), so it’s far too early to say anything about Sanders’ chances in the long run, not to mention how he would fare in a general election. But there is at least one person who seems upbeat about the possibility of his becoming the Democratic candidate next year.

The Takeaway: Policies and fundraising be damned! Let’s stop to think about the most important potential of the Sanders campaign.