Who Killed the Robot Dog? 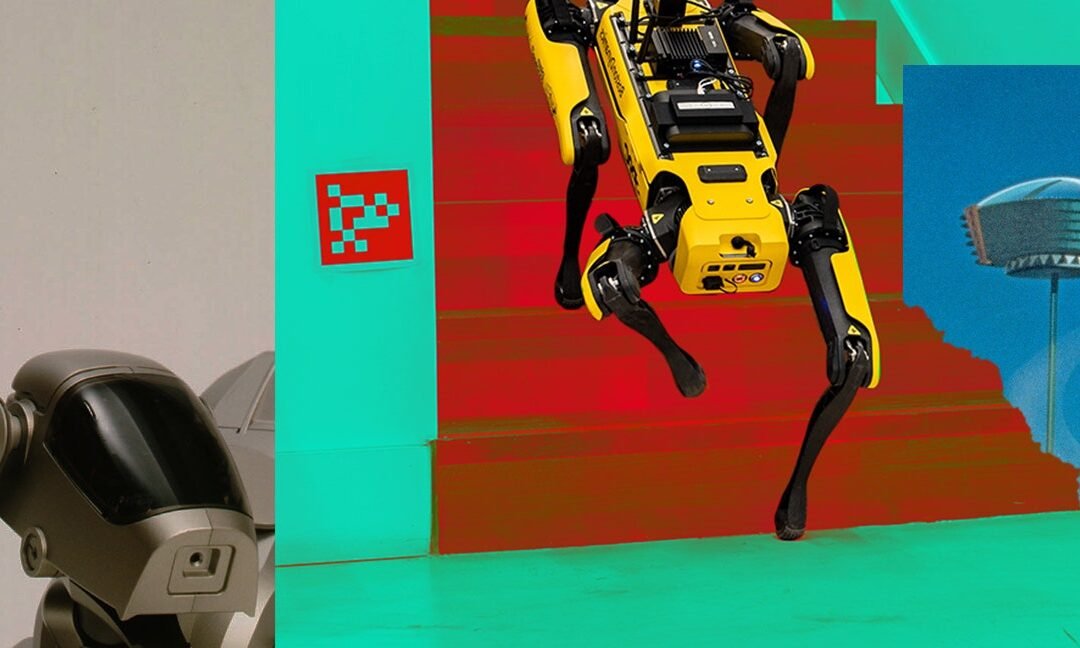 George Jetson did not want his family to adopt a dog. For the patriarch of the futuristic family in the 1960s cartoon The Jetsons, apartment living in the age of flying cars and cities in the sky was incompatible with an animal in need of regular walking and grooming, so he instead purchased an electronic dog called ‘Lectronimo, which required no feeding and even attacked burglars. In a contest between Astro—basically future Scooby-Doo—and the robot dog, ‘Lectronimo performed all classic dog tasks better, but with zero personality. The machine ended up a farcical hunk of equipment, a laugh line for both the Jetsons and the audience. Robots aren’t menaces, they’re silly.

That’s how we have imagined the robot dog, and animaloids in general, for much of the 20th century, according to Jay Telotte, professor emeritus of the School of Literature, Media, and Communication at Georgia Tech. Disney’s 1927 cartoon “The Mechanical Cow” imagines a robot bovine on wheels with a broom for a tail skating around delivering milk to animal friends. The worst that could happen is your mechanical farm could go haywire, as in the 1930s cartoon “Technoracket,” but even then robot animals presented no real threat to their biological counterparts. “In fact, many of the ‘animaloid’ visions in movies and TV over the years have been in cartoons and comic narratives,” says Telotte, where “the laughter they generate is typically assuring us that they are not really dangerous.” The same goes for most of the countless robot dogs in popular culture over the years, from Dynomutt, Dog Wonder, to the series of cyborg dogs named K9 in Dr. Who.

Our nearly 100-year romance with the robot dog, however, has come to a dystopian end. It seems that every month Boston Dynamics releases another dancing video of their robot SPOT and the media responds with initial awe, then with trepidation, and finally with night-terror editorials about our future under the brutal rule of robot overlords. While Boston Dynamics explicitly prohibits their dogs being turned into weapons, Ghost Robotics’ SPUR is currently being tested at various Air Force bases (with a lovely variety of potential weapon attachments), and Chinese company Xiaomi hopes to undercut SPOT with their much cheaper and somehow more terrifying Cyberdog. All of which is to say, the robot dog as it once was— a symbol of a fun, high-tech future full of incredible, social, artificial life—is dead. How did we get here? Who killed the robot dog?

The quadrupeds we commonly call robot dogs are descendants of a long line of mechanical life, historically called automata. One of the earliest examples of such autonomous machines was the “defecating duck,” created by French inventor Jacques de Vaucanson nearly 300 years ago, in 1739. This mechanical duck—which appeared to eat little bits of grain, pause, and then promptly excrete digested grain on the other end—along with numerous other automata of the era, were “philosophical experiments, attempts to discern which aspects of living creatures could be reproduced in machinery, and to what degree, and what such reproductions might reveal about their natural subjects,” writes Stanford historian Jessica Riskin.

The defecating duck, of course, was an extremely weird and gross fraud, preloaded with poop-like substance. But still, the preoccupation with determining which aspects of life were purely mechanical was a dominant intellectual preoccupation of the time, and even inspired the use of soft, lightweight materials such as leather in the construction of another kind of biological model: prosthetic hands, which had previously been built out of metal. Even today, biologists build robot models of their animal subjects to better understand how they move. As with many of its mechanical brethren, much of the robot dog’s life has been an exercise in re-creating the beloved pet, perhaps even subconsciously, to learn which aspects of living things are merely mechanical and which are organic. A robot dog must look and act sufficiently doglike, but what actually makes a dog a dog?

American manufacturing company Westinghouse debuted perhaps the first electrical dog, Sparko, at the 1940 New York World’s Fair. The 65-pound metallic pooch served as a companion to the company’s electric man, Elektro. (The term robot did not come into popular usage until around the mid 20th century.) What was most interesting about both of these promotional robots were their seeming autonomy: Light stimuli set off their action sequences, so effectively, in fact, that apparently Sparko’s sensors responded to the lights of a passing car, causing it to speed into oncoming traffic. Part of a campaign to help sell washing machines, Sparko and Elektro represented Westinghouse’s engineering prowess, but they were also among the first attempts to bring sci-fi into reality and laid the groundwork for an imagined future full of robotic companionship. The idea that robots can also be fun companions endured throughout the 20th century.

When AIBO—the archetypal robot dog created by Sony—first appeared in the early 2000s, it was its artificial intelligence that made it extraordinary. Ads for the second-generation AIBO promised “intelligent entertainment” that mimicked free will with individual personalities. AIBO’s learning capabilities made each dog at least somewhat unique, making it easier to consider special and easier to love. It was their AI that made them doglike: playful, inquisitive, occasionally disobedient. When I, 10 years old, walked into FAO Schwarz in New York in 2001 and watched the AIBOs on display head butt little pink balls, something about these little creations tore at my heartstrings—despite the unbridgeable rift between me and the machine, I still wanted to try to get to know it, to understand it. I wanted to love a robot dog.