Why Do Matter Particles Come in Threes? The universe has cooked up all sorts of bizarre and beautiful forms of matter, from blazing stars to purring cats, out of just three basic ingredients. Electrons and two types of quarks, dubbed “up” and “down,” mix in various ways to produce every atom in existence.

Original story reprinted with permission from Quanta Magazine, an editorially independent publication of the Simons Foundation whose mission is to enhance public understanding of science by covering research develop­ments and trends in mathe­matics and the physical and life sciences.

But puzzlingly, this family of matter particles—the up quark, down quark, and electron—is not the only one. Physicists have discovered that they make up the first of three successive “generations” of particles, each heavier than the last. The second- and third-generation particles transform into their lighter counterparts too quickly to form exotic cats, but they otherwise behave identically. It’s as if the laws of nature were composed in triplicate. “We don’t know why,” said Heather Logan, a particle physicist at Carleton University.

In the 1970s, when physicists first worked out the standard model of particle physics—the still reigning set of equations describing the known elementary particles and their interactions—they sought some deep principle that would explain why three generations of each type of matter particle exist. No one cracked the code, and the question was largely set aside. Now, though, the Nobel Prize–winning physicist Steven Weinberg, one of the architects of the standard model, has revived the old puzzle. Weinberg, who is 86 and a professor at the University of Texas, Austin, argued in a recent paper in the journal Physical Review D that an intriguing pattern in the particles’ masses could lead the way forward.

“Weinberg’s paper is a bit of lightning in the dark,” said Anthony Zee, a theoretical physicist at the University of California, Santa Barbara. “All of a sudden a titan in the field is suddenly working again on these problems.”

“I’m very happy to see that he thinks it’s important to revisit this problem,” said Mu-Chun Chen, a physicist at the University of California, Irvine. Many theorists are ready to give up, she said, but “we should still be optimistic.”

The standard model does not predict why each particle has the mass that it does. Physicists measure these values experimentally and manually plug the results into the equations. Measurements show that the minuscule electron weighs 0.5 megaelectron volts (MeV), while its second- and third-generation counterparts, called the muon and the tau particle, tip the scales at 105 and 1,776 MeV, respectively. Similarly, the first-generation up and down quarks are relative lightweights, while the “charm” and “strange” quarks comprising the second quark generation are middleweights, and the “top” and “bottom” quarks of the third generation are heavy, the top weighing a monstrous 173,210 MeV.

In the equations of the standard model, the mass of each particle corresponds to the degree to which it “feels” a universe-filling field known as the Higgs field. Top quarks are heavy because they experience intense drag as they move through the Higgs field, like a fly stuck in honey, while wispy electrons flit through it like butterflies in air. In this framework, how each particle feels the field is an intrinsic attribute of the particle. 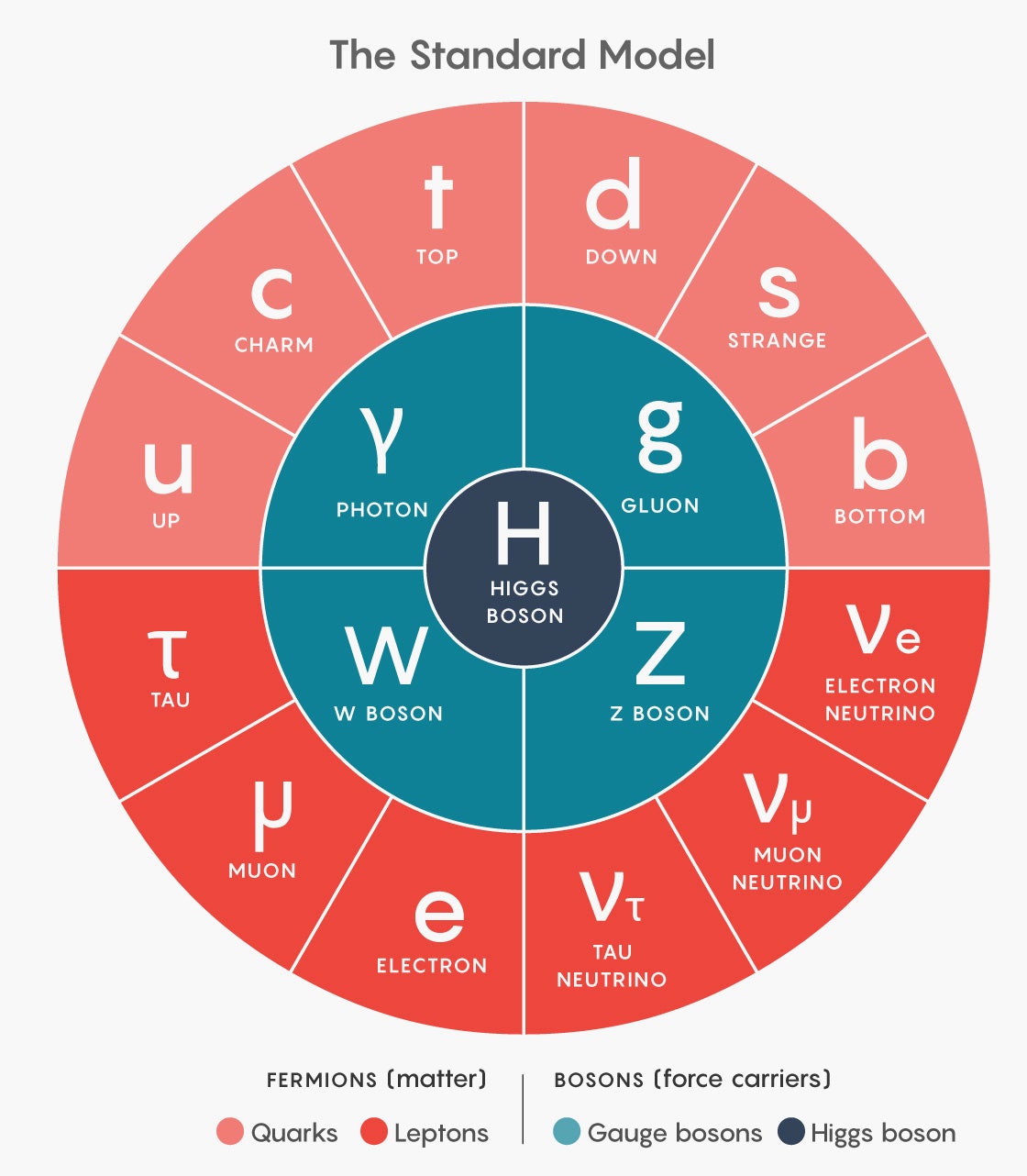 The Standard Model of particle physics includes three copies of each type of matter particle, which form the quadrants of the outer ring of the diagram.Illustration: Lucy Reading-Ikkanda/Quanta Magazine