Until 2020, the world had never seen a holiday go viral. Nearly overnight, the business world—from Apple to ZocDoc—higher education, and even several NFL teams moved from, in some cases, complete ignorance to full recognition of Juneteenth. Today’s holiday is all the rage across America and beyond.

The viral magic of Juneteenth starts with its name. A fusion of June with nineteenth, it carries a certain musicality that feels celebratory. Its historical origins are even more enchanting. On June 19, 1865, just two months after Robert E. Lee’s surrender, Union major general George Granger issued an order in Galveston, Texas, that declared:

“The people of Texas are informed that, in accordance with a proclamation from the Executive of the United States, all slaves are free. This involves an absolute equality of personal rights and rights of property between former masters and slaves, and the connection heretofore existing between them becomes that between employer and hired labor.”

The military order signified the Union Army’s domain over Texas; black people in Texas immediately understood it as a formal declaration that slavery was no longer. The details are, of course, much more complicated. June 19, 1865, hardly meant the end of hard days for Texas’ 250,000 former slaves. Still, the date stuck, and celebrations of it started as early as 1866.

Juneteenth is special because it’s about what African Americans experienced and interpreted as a moment of freedom, rather than what Abraham Lincoln (or some piece of paper) said. After all, hundreds of thousands of African Americans remained enslaved even after the Emancipation Proclamation, which was two and half years prior to Granger’s order.

For over a century, Juneteenth has been an unofficial American holiday, celebrated largely by the African American community, and even more specifically in certain parts of the country (e.g., Texas and parts of the midwestern and southern United States). Contrary to the US president claiming this week that, before him, “nobody had ever heard of it,” more than 45 states have passed legislation recognizing Juneteenth in the past few years, and celebrations have grown in scope are now celebrated in all regions. Organizers in Anchorage, Alaska, for example, were so emboldened by the Black Lives Matter protests that they decided to make Juneteenth 2020 a week-long affair.

The fuel behind the amplification of the Juneteenth signal was not simply historical reflection but the uprisings that followed the killing of George Floyd, and perhaps the pandemic. Both the uprisings and Covid-19’s disproportionate burden on the African American community reveal the failure of emancipation: The descendents of those emancipated during and just after the Civil War still live in conditions commensurate with second-class citizenship.

Data brings this narrative to life. Below, Google Trends’ five-year patterns for search queries of Black Lives Matter and Juneteenth are compared. Juneteenth demonstrates a periodicity that corresponds with the holiday every year. 2020 has marked the most the term has ever been searched, and especially the weeks of the uprisings (starting in late May 2020). 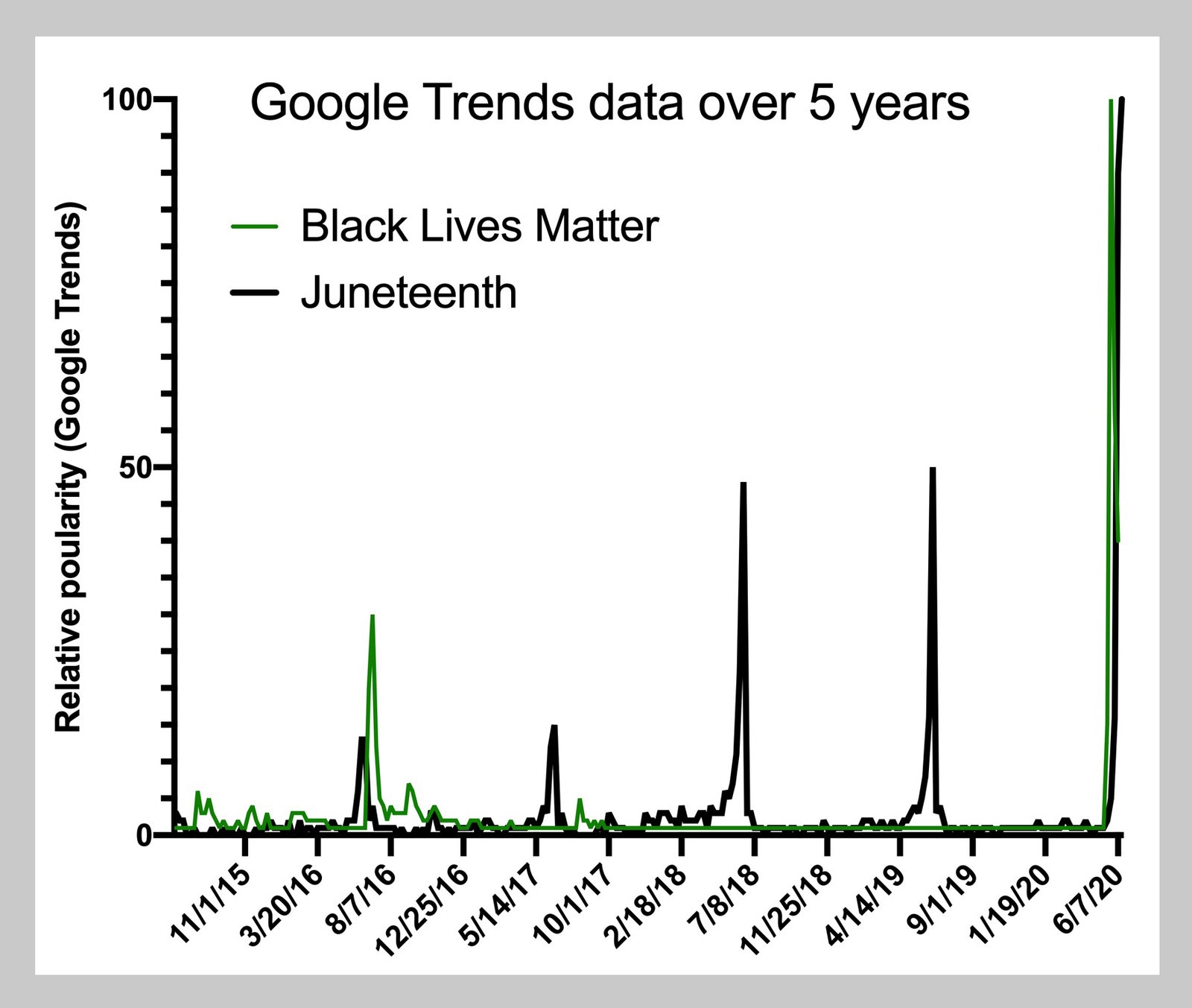